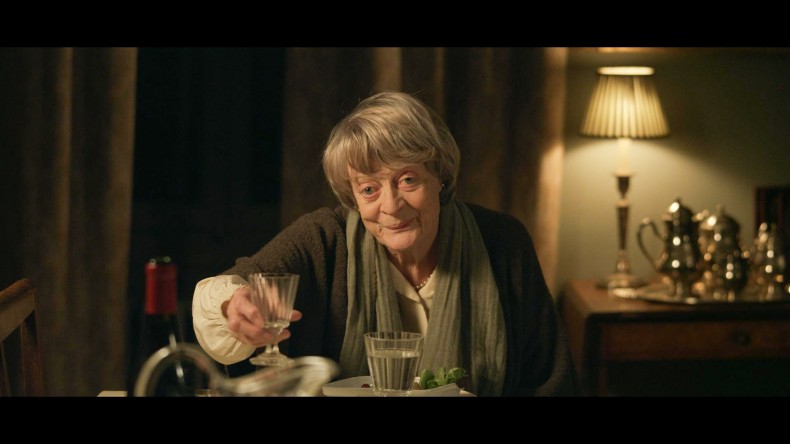 My Old Lady is like a dark and cloudy still-life painting, subtle and serene, with beautiful performances and a graceful look.

My Old Lady is the story about an old lady, Mathilde (Maggie Smith), who lives in an old, yet stately apartment in Paris with her daughter Chloé (Kristin Scott Thomas). Their quiet, modest life is rudely interrupted when an unknown American inherits the apartment. Matthias (Kevin Kline) left America under the impression he would be able to sell the apartment his father had left him and retreat to the French countryside a rich man. As it turns out, the apartment cannot be sold until Mathilde dies – and so Matthias has no choice but to move in with its two slightly mysterious residents. But as the three unlikely flatmates start to get closer to each other, Matthias discovers his past is closely intertwined with that of the old lady and her daughter.

Maggie Smith simply can do no wrong. Whether by portraying Professor McGonagall in the Harry Potter series or the Dowager Duchess of Grantham in Downton Abbey, all of her performances are passionate and heart-felt. As Mathilde, she is cunning and sharp, with a sparkling intelligence and wit, a disposition that sits opposite Kline’s tragic Matthias.

At first, Kline’s character seems rather stereotypical – a greedy and lonely man who communicates with sarcasm whenever possible. This if funny, but not very impressive. As the film continues, however, Matthias’ shield slowly comes crashing down. Kline portrays Matthias’ downfall with a lot of compassion and carefully chosen moments of strength, and the result is a remarkable performance.

When a deep and dark secret is revealed, Matthias ends up in a downwards spiral of alcohol, regret, and guilt. There is, however, a ray of sunlight amongst the darkness and that is Thomas, who plays Mathilde’s daughter Chloé. She is a fantastic actress, incredibly beautiful and with an undeniable talent for tragic characters. As Chloé, Thomas does what she does best, and completely enchants the audience.

This story was originally written as a play by director Israel Horovitz. This is definitely noticeable throughout the film, through the intense dialogue and simplicity of the scenes. My Old Lady is a film of beautiful contrasts. The stillness of the visuals stand in sharp, yet magnificent, opposition to the intensity and complexity of the story and its characters. A shocking twist becomes even more shocking because of the calm look of the film. Director Horovitz uses a certain grace and serenity to shoot his film and the result is like a still-life painting. Nothing ever moves, yet you as an audience are moved by the visuals before you.

END_OF_DOCUMENT_TOKEN_TO_BE_REPLACED
Taylor Sinople Picks: The 16 Best Films of 2016
Form and Function in Alex Ross Perry’s “Queen of Earth&...
Digging for Fire and Unexpected: Husband and Wife Process Parenthoo...
Every Thing Will Be Fine 3D Review