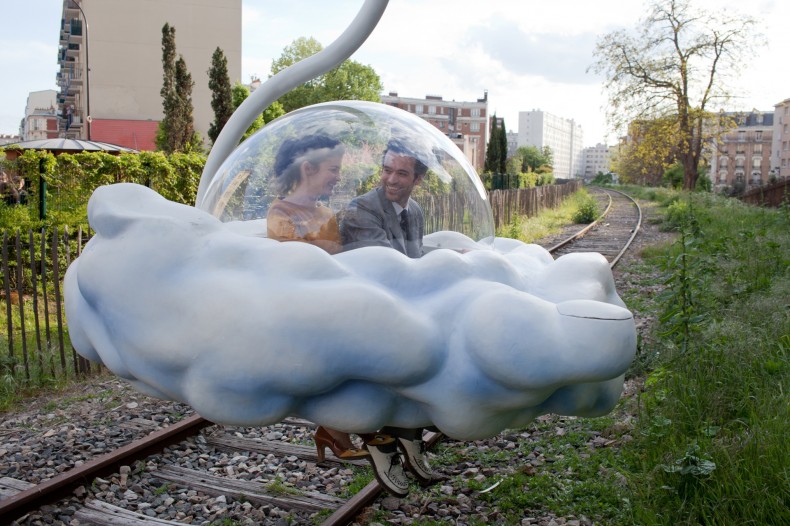 “Mood Indigo” is a heart-warming and infinitely creative film, but it will leave you with a heartache.

French Academy Award-winning director Michel Gondry, best known for his “Eternal Sunshine of the Spotless Mind,”adapts a novel by Boris Vian, called L’écume des jours.  “Mood Indigo,”the English title of the adaptation, is about Colin (Romain Duris), a wealthy young bachelor who lives in a house full of rarities and strange inventions. He is in the company of his best friend Chick (Gad Elmaleh), who has an obsession with the philosopher Jean-Saul Partre, his cook, Nicolas (Omar Sy) and a tiny man, dressed as a mouse. Colin watches his best friends fall in love and suddenly dreads his own solitude. He demands to fall in love and he does, with the beautiful Chloé(Audrey Tautou). They start a whirl-wind romance and soon Colin lives with his head in the clouds – quite literally, because he and Chloéhave their first date in a cloud on a wire attached to a giant crane, traveling over Paris. Colin and Chloéget married and everything seems to be perfectly quirky – but then tragedy strikes. A flower starts to grow inside of Chloé’s lungs and she takes ill. To cure her mysterious disease, Colin surrounds his love with white flowers. But will it be enough to heal her?

The film stars three well-known French actors, Romain Duris and Audrey Tautou as the couple Colin and Chloé, and Omar Sy as Colin’s cook. Duris, although less known by the international audience as his co-stars Tautou and Sy, delivers a funny and touching performance. He honors the quirkiness and playfulness of “Mood Indigo”and makes sure that his character has these same characteristics. Sy, known for the French hit-film “Les Intouchables,”does a great job as Colin’s cook/chauffeur/waiter/mentor/personal assistant. But the real star of “Mood Indigo,”is Audrey Tautou. She is charming and sweet as Chloé, with just a hint of naughtiness. Your eyes are drawn to her every time she emerges on the screen, but she acts with so much grace and passion that this is entirely justified.

But it is not the beautiful performances that make “Mood Indigo” such an unforgettable film. The production design of this film is so creative and original. Child-like, with bold colors, strange patterns and extravagant inventions, it matches the story of Colin and Chloé. Every rarity you dreamt of as a child, is somehow in “Mood Indigo:”a piano that makes drinks by playing chords, furniture that moves on roller-skates, a tiny person in a mouse-onesie to keep you company, laces that tie themselves, oven-baked snakes out of miniature ovens, spaghetti legs, a bubble-gun and a car made of transparent glass. It sounds perfect and for the first part of “Mood Indigo,”it is. From the performances, to the music, to the costumes – it fits together perfectly. The playfulness and sweetness reminds me of “La Fabuleux Destin d’Amélie Poulain,”a French art-house film also starring Audrey Tautou.  The film feels so fresh and fun and creative – director Gondry completely draws you into this strange and absurd world. For a good 90 minutes, you cannot imagine a better or happier place in the universe. But the remaining minutes of the film, are the complete opposite.

When Chloégets ill, the mood of the film gets more dark, more melancholic and so does the music and the cinematography. In the first part of the film, the music fits the happy and light mood. Off-key piano tunes are accompanied by brasses that sound remarkably vintage and French. But as soon as the color starts to drain from “Mood Indigo”, violins are introduced into the music, which gives it a more haunting and chilling feel. The cinematography follows this principle. The scenes become less colorful and the decor of Colin’s apartment starts to lose its liveliness as Chloégets sicker. The decor becomes run-down and grim, until the entire film is drained of color and everything is in black and white.

More than just a visual treat, “Mood Indigo” also contains underlying critique on our modern day society. The film shows us how dull and grim our life has become, working in offices like machines and not appreciating beauty and fun anymore. It reminds you that life is finite and that you should enjoy it to the fullest. Apart from that, religion is also being criticized, by ridiculing members of the church and portraying the idolization of God by idolizing a fictional philosopher.

The contrast between before and after Chloé taking ill is so stark, that it seems like you are watching two entirely different films. After a while, the contrast becomes too stark and the images of Chloé’s illness and Colin’s hurting become so dark and gripping that you forget the happy beginning entirely.

END_OF_DOCUMENT_TOKEN_TO_BE_REPLACED
Taylor Sinople Picks: The 16 Best Films of 2016
Form and Function in Alex Ross Perry’s “Queen of Earth&...
Digging for Fire and Unexpected: Husband and Wife Process Parenthoo...
Every Thing Will Be Fine 3D Review