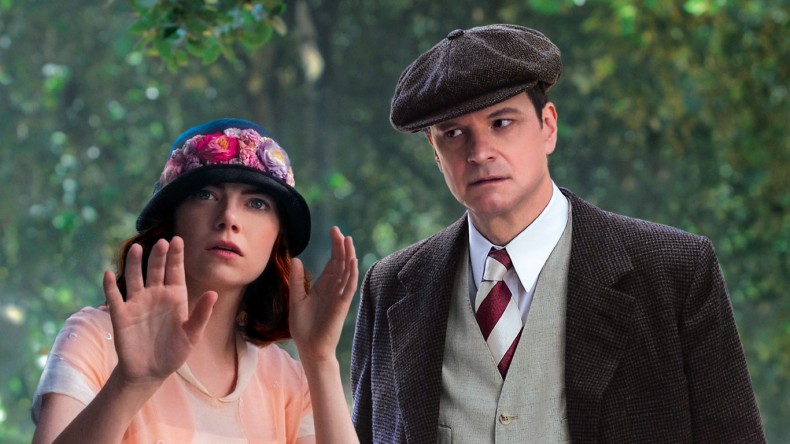 Sharp as ever, Woody Allen's "Magic in the Moonlight," is a small but well-constructed, fun film about real-world magic.

Incorporating magic into the movies began in the silent era as a source of wonderment. The cinema itself was, then, a magic show. Today, it’s a riskier proposal. Photographing a magic act on-stage has little effect when the audience is well aware of the possibilities of manipulated footage. It can be a disastrous attempt at elevated escapism. In “Magic in the Moonlight,” Woody Allen plays with a tri-layered magic show featuring stage performance, supernatural occurrences, and the power of cinema itself to line it all up.

Stanley (Colin Firth), a world famous magician who performs under the guise of a Chinese conjurer named Wei Ling Soo, takes a trip to the French Riviera in order to expose Sophie (Emma Stone), a young American woman who claims to have psychic abilities, as a fraud. He arrives at the Catledge estate, where Sophie has been hired to perform a séance, and is immediately offended at the allure she holds over everyone around her. She’s longed after by the wealthy Brice Catledge (Hamish Linklater), and paraded around the world by her mother (Marcia Gay Harden), who is sure to count every penny of her earnings. But while Stanley believes Sophie’s “mental vibrations” must be fake, he’s still taken aback by just how accurate they are.

The experience of a long-tenured film director can be felt in clear structure. Early work by great filmmakers like Paul Thomas Anderson can be wonderfully promising and fresh, but frequently lack the skill to offer a narrative free of outlying scenes and sloppy construction.

At a modest 97-minute run-time, Allen designed “Magic in the Moonlight” just right. No scenes feel periphery or unnecessary. And a number of tonal shifts make for a solidly constructed and bitingly funny screenplay that allows us to rest assured that we are in good hands, thus allowing ourselves to escape to the swing-music-filled, cigarette-smoke-filtered 20s.

Watching the film, I fear it will be criticized or lost altogether as a negligible entry in Allen’s catalogue. After a year dominated by Cate Blanchett’s performance in 2013’s “Blue Jasmine,” there’s no arguing the significantly smaller imprint “Magic in the Moonlight” presses. But it’s a lovely one. Allen can do big emotions, big stories, but he’s just having fun with this one. It’s a short story about a stubborn magician who denies all forms of real world magic until finding that he may be wrong.

And “Moonlight” has its performances, too. Firth is aloof and royal, but isn’t given quite the right material to shine as he did in “The King’s Speech.” Emma Stone is the real star of the film. With the beauty of the era, and a mystical, youthful personality, she sells this entire supernatural possibility. Her care-free attitude about whether or not others believe in her gift leaves the audience considering whether she could be genuine – perfect execution.

Allen is revisiting nostalgia for an irretrievable time. Today, Sophie’s apparent omniscience could be achieved through a little Googling – most of what she knows about people, after all, is information available on any social network. Technology is a marvel, but it offers an explanation for everything, and removes a simpler kind of magic.

Allen, at 78, is sharper than ever as a writer. “Magic in the Moonlight” is more aggressively paced than his recent work, and sensationally funny, too. Stanley, looking out into the night sky from an observatory, recalls to Sophie his fears of the universe when he was a child that have resided as he’s grown larger (not older, just, you know, big, like the universe).

Stanley is the most clearly-defined “Woody Allen” character we’ve seen in years. His utter refusal to allow in thoughts of metaphysical possibilities comes straight from the writer’s skeptical pen. Allen explores the limits of rational thought when he allows in the possibility that Sophie could be a genuine clairvoyant, and the impact it has on Stanley’s worldview. He even goes as far as to have another character, witnessing Stanley’s whirlwind of rudeness and egotism, refer to him as having a bit of a “neurotic personality disorder.”

Seeing Owen Wilson transported to 1920s France from today’s society in “Midnight in Paris” may have been more magical than starting off there in “Magic in the Moonlight,” but after nearly five decades of films at a rate of one a year, Woody Allen is remarkably, impossibly persisting as a treasured and unique voice.

Taylor is a Chicago-based writer and aspiring film historian. He is the editor here at TFP, and has contributed to a number of international publications such as Cinema Scandinavia, PopMatters, and Room 101 Magazine. He can also be found listening to podcasts, researching topics he has little use for, or running after a city bus.
You might also like
colin firthEmma Stonemagic in the moonlightMarcia Gay Harden

by Josef Rodriguez on February 8, 2015
Although its wanton violence is an arguable contradiction to many of its core themes, “Kingsman: The Secret Service” is a fun, hilarious, and stylish action extravaganza from one of the most creative voices working today.

by Jess Brooman on September 14, 2014
Featuring excellent performances from the likes of Nicole Kidman, Colin Firth and Mark Strong, "Before I Go To Sleep" will please those who are expecting little more than an average, competently-made mystery thriller.
comments
Leave a reply
Add Comment Register

END_OF_DOCUMENT_TOKEN_TO_BE_REPLACED
Taylor Sinople Picks: The 16 Best Films of 2016
Form and Function in Alex Ross Perry’s “Queen of Earth&...
Digging for Fire and Unexpected: Husband and Wife Process Parenthoo...
Every Thing Will Be Fine 3D Review