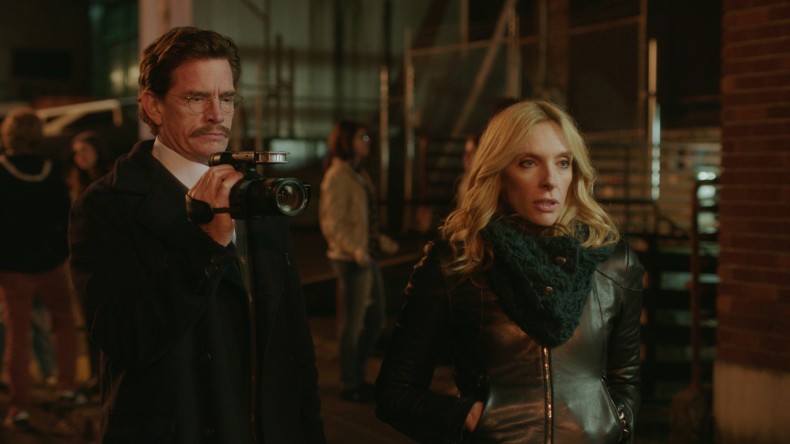 "Lucky Them" is lucky to have Toni Collette and Thomas Haden Church, the leads that elevate this intriguing but forgettable mystery-rom-com to watchable standards.

Toni Collette may seem like a shape-shifting actress, but if her best performances (like in “The Way Way Back,” “Little Miss Sunshine,” and “The Hours”) have taught us anything it’s that she does have a type: the third or fourth billed secret weapon. Directors know she’ll find nuance with any amount of material, but limit her all the same with supporting roles. So it’s a special treat to see Collette work with a nice, long stretch of screen time as the lead in “Lucky Them.”

She is Ellie, a thirtysomething Seattleite rock critic in a messy relationship with music and a chip on her shoulder in the dating department. It’s been ten years, but she still struggles to cope with the loss of her adolescent love – a musician named Matthew Smith who skyrocketed to indie fame (by way of Kurt Cobain) but disappeared, thought to have thrown himself from a cliff, achieving sonic immortality in death (by way of Elliott Smith).

Ellie is in trouble with the magazine she writes for when her unknown artist features (the type that first broke the story of Smith’s music) stop bringing in new readers. Her boss (Oliver Platt) says she needs to think bigger, so she agrees to do the Matthew Smith follow-up story – the one she’s been putting off, the one she thinks of more as “picking at a scab.” She doesn’t get far on her research, though, before coming across a website that posts Matthew Smith sightings and she gets in touch with someone who claims to know that Smith is, in fact, alive and still performing somewhere outside the city. Along with Charlie (Thomas Haden Church), her millionaire friend that bankrolls the whole project as an excuse to play with his latest interest, documentary filmmaking, Ellie commits to tracking down Matthew and closing that haunting chapter of her life.

“Lucky Them” is a romantic-comedy-turned-mystery that makes for an enjoyable night in, but it can be aggressively unremarkable. There are moments that don’t feel crafted with expert hands, leaving unintended room for interpretation. There is this unnecessarily misguiding sequence in which Ellie sits on a bench with someone to whom she owes a great apology, and when leaving, accidentally drops an envelope of very important cash that the man picks up – unable to catch her attention before she hops on a bus. She accidentally dropped the money, now he’s got to return it to her – simple scene, right? The way it’s shot though, without ever showing the money slip out of her bag, could be read as the filmmakers suggesting the money was left on purpose as a gift in place of an apology. This opens all sorts of thought-lines about what he’ll do with the money, and how she could afford to give it away, while the film moves on assuming we’re on a different page.

This isn’t a specific nitpick so much as an example to the kind of “what were they thinking” moments that crop up more than once in “Lucky Them.” Most detrimental is the epilogue scene, which hits us after a fine ending with an underdeveloped shift in the relationship between two primary characters that left those that I’ve talked to about the film bewildered.

“Lucky Them” is impressive and fresh, though, when firing on all cylinders. Megan Griffiths is on her fourth feature fronted by a damaged woman, and she owes most of the success of the film to Collette’s high-level performance. Collette is a warm and sensible presence – sarcastic and self-defeating up front, but revealing softer emotions as she draws closer to finding Matthew. The transition from intimidating critic to betrayed-girl-all-grown-up is done through a depiction of the most fascinating process in documentary filmmaking. It’s the opening up, the bonding of subject and camera. As Charlie films their search and asks her to narrate along the way, Ellie’s initial standoffishness with the camera gives way to eventual comfort, and with that, Charlie captures some great footage of Ellie exploring the places where she and Matthew fell in love. She retraces her steps through the spots where they met, kissed, and slept together, and reluctantly talks her way through the emotions of being back there – a great expositional device in place of linearity-breaking flashbacks.

Thomas Haden Church, whose pompous blockhead character was nominated for an Academy Award in 2004’s “Sideways,” returns with it here to hilarious results. It’s a matter of saturation, so let’s hope Church keeps performances of this degree of absurdity to one a decade. He nails it this time as Charlie – a grown-up kid millionaire with nothing to do with his money but pursue random, expensive hobbies and make terrible life decisions. He sells the character like no one else could, asking for Ellie’s phone number: “Do you wanna write it? No, you know what, I’ll get it, there’s a crispness to my writing that I enjoy.”

Charlie’s shrugged comment, “Life’s weird,” about sums up “Lucky Them.” Griffiths gives rare, big roles to both her leads and provides a glimpse at the impact a person can have on another, but that about covers the dramatic achievement. The actors simply outstrip their own production. A climactic montage comes when we hear Matthew Smith’s music for the first time, but it’s our synchronicity with Ellie’s emotions that make the scene one of the film’s best, not necessarily the actual music (composed by Craig Wedren, who typically works in the late-night-comedy space). With a lack of dynamism and cohesive quality from all departments (not just the actors), “Lucky Them” is a lightweight that’s quick to slip from the mind and heart.

Taylor is a Chicago-based writer and aspiring film historian. He is the editor here at TFP, and has contributed to a number of international publications such as Cinema Scandinavia, PopMatters, and Room 101 Magazine. He can also be found listening to podcasts, researching topics he has little use for, or running after a city bus.
You might also like
Amy SeimetzLynn SheltonOliver PlattToni Colette

by Williamson Balliet on June 2, 2014
Ti West’s return to found footage, “The Sacrament,” is occasionally jarring but ultimately forgettable and without nuance.
Comments
Leave a reply
Add Comment Register

END_OF_DOCUMENT_TOKEN_TO_BE_REPLACED
Taylor Sinople Picks: The 16 Best Films of 2016
Form and Function in Alex Ross Perry’s “Queen of Earth&...
Digging for Fire and Unexpected: Husband and Wife Process Parenthoo...
Every Thing Will Be Fine 3D Review