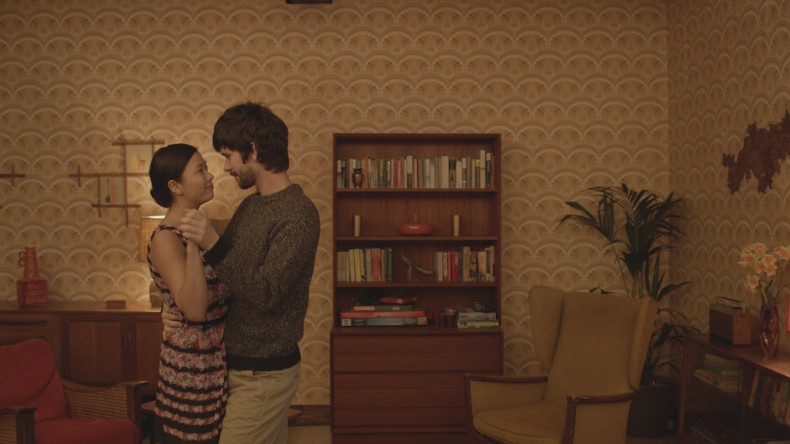 Creating an honest and realistic portrait of grief that is neither irritating nor melodramatic is a challenge for any director, so it’s even more impressive that Hong Khaou’s feature debut, “Lilting,” is as great as it is. Set in contemporary London, Khaou’s film picks up weeks after a tragedy that leaves the lives of two very different people in complete disarray, unable to comprehend such a senseless loss.

Kai’s (Andrew Leung) sudden death has left his mother Junn (Pei-pei Cheng), and longtime lover Richard (Ben Whishaw), in a state of shock and grief. Having never officially come out to his mother, the burden is left to Richard, despite the fact that Junn speaks nearly no English and has a particular distaste for Kai’s “friend.” At her new assisted living home, Junn has met an Englishman named Alan (Peter Bowles) to whom she takes a fancy, and Richard enlists the help of Vann (Naomi Christie) to help translate their conversations. In doing so, Richard comes to understand Junn’s struggles more clearly, while devising a plan of his own to deliver the truth about her son’s sexuality in a delicate manner.

Shot beautifully by DP Urszula Pontikos – who also worked on Andrew Haigh’s LGBT-themed “Weekend” – and stylishly edited by Mark Towns, Hong Khaou’s debut film is one of the year’s best. Khaou handles lofty themes of loss, both emotionally and culturally, with sensitivity and honesty by boldly resisting the urge to allow the film’s emotional aspects to veer over into melodrama. Instead, Khaou takes an agreeably low-key approach to the material, allowing his immaculate writing, and the flawless performances from the entire cast, to conjure a naturalistic tone that carries the film wonderfully.

Both Ben Whishaw and Pei-pei Cheng give career best performances, and newcomer Andrew Leung is absolutely stunning as Kai’s deceased lover. Whishaw is one of the best young actors working today, and each performance he gives seems to be better than the last. “Lilting” is arguably his most subtle work, but also his most emotional, and he’s able to strike a perfect balance between the two as the film rises to its emotional climax. Cheng, a Chinese martial arts master, brings a much-needed toughness to her character, and Khaou writes Junn with a refusal to compromise her dignity that is brought to life by Cheng’s impeccable performance.

Some of the film’s best scenes involve Cheng talking about her emigration to London, where she never assimilated to Western culture, a source of frustration for both Kai and Richard. Through these scenes we come to understand her anger towards Richard more clearly, but Khaou smartly decides to never side with one or the other, allowing both characters to vent to each other through their third party translator, performed magnificently by Naomi Christie. Vann’s burgeoning friendship with Richard never takes the predictable turns most audiences are expecting, and her development allows the translation scenes to have an added layer of poignancy that may have been absent without them.

Khaou is a distinctly stylistic filmmaker, one who successfully uses sound design and cinematography as tools to accentuate the film’s themes of memory and cultural alienation, instead of simple narrative progression. Flashback sequences are characterized by unsynced audio; words float through the air but the mouths are not moving, as if to suggest that memories are simply stories we tell ourselves after the fact. Other times, Khaou employs a distinct visual aspect to emphasize the fundamental shift that comes with a loss so great. In most cases, flashbacks like the ones in the film are used to convey expositional material not covered in the present dialogue, but Khaou’s characters are almost forced to remember, trapped in a flimsy reality as they try desperately to bring Kai back to life.

“Lilting” is undeniably a first feature, as evidenced by its uneven pacing and fairly repetitive nature, which are trademark mistakes for first-time filmmakers. However, none of this ever really hurts the film, and the film’s messiness ultimately reinforces the passion of Khaou’s filmmaking, which is so obviously unconcerned with conventional narrative and technical structure that it’s almost admirable. “Lilting” is beautiful, boldly original, and endlessly creative, conveying its themes with humor and uncompromising grace.

Not Yet Rated (equivalent of R-rating for language)

Josef Rodriguez is a writer, filmmaker, and musician living in New York City. He is often labeled as "that guy who didn't love Boyhood" and he finds himself liking Harmony Korine films more than he likes his own friends. When he's not stressing over turning in reviews on time, Josef can be seen playing guitar, watching "Spring Breakers," or trying to write the next great American movie.
You might also like
Ben WhishawHong Khaou

by Zack Miller on January 19, 2015
Paddington (the movie), just like Paddington (the bear), is messy and endearing while pretending to be something it's not.
Comments
Leave a reply
Add Comment Register

END_OF_DOCUMENT_TOKEN_TO_BE_REPLACED
Taylor Sinople Picks: The 16 Best Films of 2016
Form and Function in Alex Ross Perry’s “Queen of Earth&...
Digging for Fire and Unexpected: Husband and Wife Process Parenthoo...
Every Thing Will Be Fine 3D Review