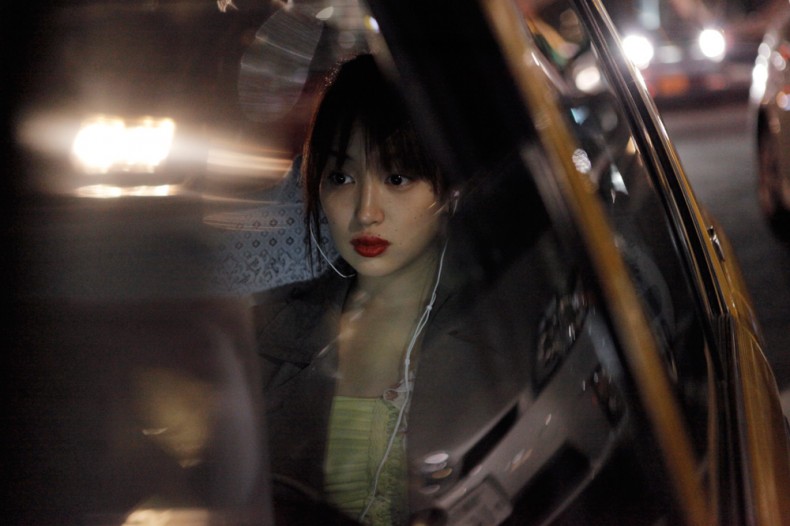 "Master director Abbas Kiarostami's "Like Someone in Love" is an exquisite, sensitive portrayal of love, loneliness, and mistaken identity that revels in quiet storytelling and powerful camerawork to unequivocal success."

The film opens on a wide shot of a crowded bar in Tokyo, Japan. There is a woman speaking somewhere off-screen, yet we don’t cut to her. Our instinctual impulses as movie-watchers are instantly challenged. Why can’t we see her? Are we looking at the point of view of this woman, or is she in another scene entirely? From minute one, Kiarostami plays with the cinematic format of storytelling in interesting ways that never cease to entertain if not inspire wonderment.

As it turns out, the woman is Akiko (Rin Takanashi) – a college student moonlighting as an escort from this particular bar. Akiko is on the phone arguing with her fiancé (ignorant to her profession) who seems rightfully concerned – demanding to know where she is. Akiko lies. Shortly after the phone call, Akiko’s pimp sends her to see “an important man” an hour outside of Tokyo as a personal favor to him, but she doesn’t want to go. Her grandmother is in town for the day and she was hoping to see her that night.

Despite her refusal, she ends up in a cab to meet this important man late in the night and arrives to a homey, quiet apartment and the elderly Takashi (Tadashi Okuno). Takashi is an ideal image of a grandfather: compassionate, wise, and patient. Akiko and Takashi awkwardly converse about their lives and art until Akiko disappears into the bedroom – an invitation. Takashi is instead more concerned about eating dinner together – it’s clear he is searching for some other sort of intimacy. Over the following morning, the two form an unlikely bond.

The rest of the inexpressible connection between these two companions unfolds as Takashi and Akiko run into Akiko’s daft fiancé, Noriaki (Ryo Kase). Takashi’s age leads Noriaki to assume he is Akiko’s grandfather. Takashi responds, “I am as much a grandfather to you as I am to Akiko.” Noriaki takes it as a compliment.

Much of the power of the plot comes from what is left out. Takashi’s motivations for sending for Akiko in the first place, for example, are left unclear. Assumptions need to be made by the audience, not only the characters inside of the narrative. The film’s meager story is made magical through the craftsmanship in all departments. Kiarostami exercises masterful control of the frame and everything that is in it. Every shot in “Like Someone in Love” has been thoughtfully, if not obsessively, conceived to tell the story in as few cuts as possible. There are many instances in which an entire scene may have only two or three camera set ups, but each of these set-ups work to hold the attention of the eye more than two or three dozen lesser shots could.

The result is a series of utterly engrossing sequences, none more effective than Akiko’s initial cab ride to meet Takashi for the first time. Akiko stares out the window at the glitzy lights of Tokyo as she listens to her grandmother’s voicemails that have come in throughout the day. Her grandmother excitedly describes where she’ll be waiting for Akiko – near the train station. Each voicemail becomes increasingly more sorrowful as her grandmother waits all day and eventually accepts that she will have to go home without the visit. Listening via headphones, the sadness behind Akiko’s eyes and the understanding of the circumstance in which she will not be able to see her grandmother is heartbreaking. Akiko asks the cab driver to drive past the train station to at least try and see her grandmother in passing. I dare you to not find yourself leaning forward in your seat, straining to see if Akiko recognizes her grandmother or not as the cab passes the station.

Rin Takanashi’s performance as Akiko turns on a dime from her on-screen woefulness, to the perky persona that makes her a successful call girl. Meanwhile, 82-year-old Tadashi Okuno displays surprising gravitas as Takashi – possessing an indescribable, paternal kindness and knowingness in his eyes.

With only a handful of scenes filling out the near-two-hour runtime, “Like Someone in Love” isn’t for the action-hungry, but as a cinematic examination of the assumptions we make and the identities we portray, it is a pleasure to experience. Abbas Kiarostami is, himself, a filmmaker of mistaken identity. Coming from the Iranian New Wave in 1970, Kiarostami has mastered the formal drama, creating style from exemplary restraint. Although the story could have taken place anywhere, his love and understanding for Tokyo’s place inside the narrative resulted in a film that is exceptional in nearly every way.

Taylor is a Chicago-based writer and aspiring film historian. He is the editor here at TFP, and has contributed to a number of international publications such as Cinema Scandinavia, PopMatters, and Room 101 Magazine. He can also be found listening to podcasts, researching topics he has little use for, or running after a city bus.
You might also like
like someone in loverin takanashi

New to The Criterion Collection: May 2014

by Taylor Sinople on May 12, 2014
Like Someone in Love, 2012 (Available May 20, 2014) After near forty films in Iran, “Certified Copy” brought Kiarostami well-deserved global acknowledgement. Kiarostami now returns with his second international film examining mistaken identities: the sensational “Like Someone in Love”. Akiko (Rin Takanashi), a college student moonlighting as an escort in Tokyo, is sent to see the elderly […]
comments
Leave a reply
Add Comment Register

END_OF_DOCUMENT_TOKEN_TO_BE_REPLACED
Taylor Sinople Picks: The 16 Best Films of 2016
Form and Function in Alex Ross Perry’s “Queen of Earth&...
Digging for Fire and Unexpected: Husband and Wife Process Parenthoo...
Every Thing Will Be Fine 3D Review