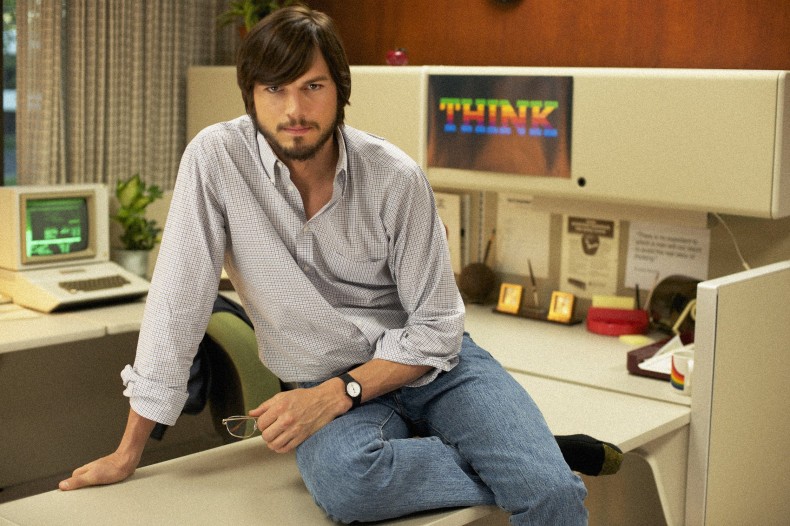 “Jobs” is a disappointing, inconclusive effort that establishes the early life of Steve Jobs, but fails to dig further into the enigmatic character and the polarizing legacy he has left behind.

It’s a lot of pressure to be the forerunner of a great story. Popularized by the New York Times best-selling biography by Walter Isaacson, the life of Apple Inc. co-founder Steve Jobs from birth to continuing legacy after death is one of the most fascinating modern stories that has yet to be told in cinema. Fans are no doubt ready for a triumphant portrayal of the controversial and inspiring Steve Jobs – but what they’ll get with director Joshua Michael Stern’s biopic “Jobs” is a product consistently lost in the scope of its own material that settles for being an inconclusive half-measure of a film.

Before Jobs (Ashton Kutcher) unveiled iPods, iPhones, and iPads, he was floating through Reed College in Oregon; directionless until stumbling upon a prototype of a computing system that displayed characters on a television screen. Steve Wozniak (Josh Gad) was developing the system as a hobby when Jobs saw through to the possibilities of the home computer and presented the system at an engineering club. No one believed that the current toys of the counterculture – circuit boards, operating systems – could be a viable product for the everyday consumer. Jobs recognized the opportunity in the assumption: “how does someone know what they want if they haven’t seen it yet?”

“Jobs” follows the rest of the classic “company-in-a-garage” origin story before jumping forward through time as Apple goes public, designs the iMac, fires Jobs, and begs for him to come back in 1996.

Powered by a screenplay from first-time feature writer Matt Whiteley, “Jobs” shows a lot of the seminal events that influenced Apple and its products, but curiously leaves out much, much more. The pacing is all off – flying through montages early in the film, slowing to a grinding halt in the third act, and ending abruptly with the anticipated story incomplete. While the opening of the film hits on some great little moments that dissect the emergence of Jobs’ tyrannical desire for quality, the rest of the story only tracks Steve’s struggles to develop Apple’s home computers while contending with Apple’s Board of Directors. Receiving no mention are any of the other industries revolutionized by Apple –music, phones, retail stores. Also nowhere to be found is any mention of the cancer that killed Jobs. While there is more to the person than the illness, the filmmakers spend an awful lot of time constructing Jobs as a steel-tough, driven force to not access a delicious hotbed of drama by letting us witness this character confront mortality.

To the film’s credit, things are kept watchable thanks to an exciting set of supporting performances and cameos. Dermot Mulroney, Matthew Modine, J.K. Simmons, and even James Woods fill out the influential people in Steve Jobs’ life. Most impressive is frequent funny-guy Josh Gad (“Love & Other Drugs,” “The Internship”) as Steve Wozniak in a breakout performance similar to Jonah Hill’s success in “Moneyball.” Gad’s short monologue when quitting Apple after being disillusioned with corporate success is the best scene in the movie.

The casting of Ashton Kutcher as the headlining role of Steve Jobs has become an intriguing point of discussion. Kutcher is a dead ringer for early Jobs, and you can’t help but wonder just how much this visual relationship had to do with the selection process. Kutcher has put in the research and effort to meticulously recreate the mannerisms and behavior of Jobs. The distinct gait while going on long walks, the hand movements that dismiss your ideas as quickly as they’re spoken – it’s all there. Ultimately, though, Kutcher can’t shake the ghosts of past comedic roles that have left their mark in his distinctive voice. I knew it wasn’t working the moment Kutcher introduces himself: “Hi, I’m Steve Jobs” – I just didn’t buy it. This role needs a soul-level embodiment of character. Kutcher’s Jobs is nuanced, but the script doesn’t give the actor enough grit to chew on in order to recede into the character, and it ends up being surface level.

“Jobs” doesn’t feel as cool as “The Social Network,” or as imposing as “Lincoln.” The over-constructed narrative isn’t very much fun, and frequently whiffs when pumping in sentimentality. A sequence of Jobs taking acid and standing in a field while the camera spins around him is uncomfortably cheesy. Ashton Kutcher’s performance suggests a buried talent, but director Joshua Michael Stern digs up only pieces of it.

There’s a lot of pressure hanging on being the first out of the gate with this story. Maybe “Jobs” was produced a little too fast, or maybe the people involved have been wrong from the beginning. Fortunately, this isn’t the end-all for Steve Jobs onscreen – cinema loves to tell the same stories again and again.

Taylor is a Chicago-based writer and aspiring film historian. He is the editor here at TFP, and has contributed to a number of international publications such as Cinema Scandinavia, PopMatters, and Room 101 Magazine. He can also be found listening to podcasts, researching topics he has little use for, or running after a city bus.
You might also like
apple incDermot MulroneyJ.K. SimmonsJohn Getz

by Zack Miller on July 20, 2014
"Sex Tape" is the lifeless, laugh-less new movie starring Jason Segel and Cameron Diaz. To borrow from the trailer: Siri, how do you perform CPR on comedy?
comments
Leave a reply
Add Comment Register

END_OF_DOCUMENT_TOKEN_TO_BE_REPLACED
Taylor Sinople Picks: The 16 Best Films of 2016
Form and Function in Alex Ross Perry’s “Queen of Earth&...
Digging for Fire and Unexpected: Husband and Wife Process Parenthoo...
Every Thing Will Be Fine 3D Review