Reviews
0
previous article
A Fresh Look At: The Boys in the Band (1970)
next article
Review: The Rover 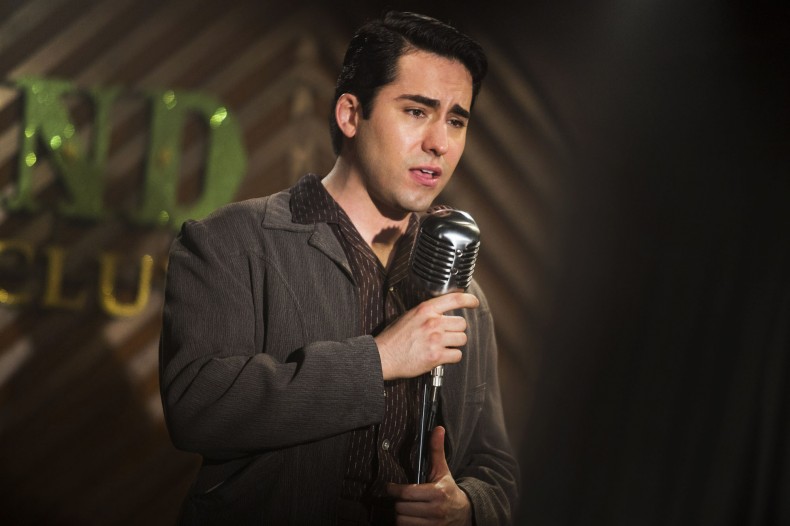 Although "Jersey Boys" suffers from a refusal to deepen its exposé on The Four Seasons, the film coasts for almost two and a half hours on exciting performances from its four leads and a soundtrack of classic hits.

The story of Frankie Valli and The Four Seasons isn’t one that seems to coalesce with Clint Eastwood’s filmography, but the seasoned director, a longtime musician and who’s now entering his 6th decade in Hollywood, is the only filmmaker who really could have directed the story of Valli’s life. Based on the eponymous Broadway musical, “Jersey Boys” tells the story of a young group of singers from New Jersey, led by the angelic voice of Frankie Valli (John Lloyd Young), who went from small-time crooks to chart topping pop stars in a matter of years.

On guitar, Tommy DeVito (Vincent Piazza) was always a smooth-talking, debt-collecting troublemaker, roping Frankie and whoever else would listen into idiotic scams and cons that never worked out, consistently landing one of them in jail; bassist Nick Massi (Michael Lomeno) was the quiet one of the group, often just nodding his head in agreement with one side of any particular dispute, mostly the ones between Tommy and Bob Gaudio (Erich Bergen), the band’s keyboardist and songwriter responsible for penning all of their #1 hits. Together, they were The Four Seasons, one of the most popular groups to ever hit rock’n’roll.

But, as anyone who’s ever seen a biopic could surmise, things weren’t always about fame and fortune for these budding stars. When they weren’t on stage, the members of the group often found themselves in the middle of domestic disputes, battling each other’s egos, and working to maintain Tommy’s debt to Norman Waxman (Donnie Kehr), a debt collector to whom Tommy owed a staggering amount of money. With the help of mob boss Gyp DeCarlo (Christopher Walken) and record producer Bob Crewe (Mike Doyle), the boys are able to keep it together for a while, but it won’t be long before their issues, both within and without the band, are beyond their control.

“Jersey Boys” has the trademarks of every music-based biopic you’ve ever seen. The neatly structured rise-and-fall story structure; the chain smoking, verbally abusive wife; the tour girlfriends; the “this song will never sell!” scene that then sets up the reveal of the band’s biggest hit; the social and economic barriers that must be overcome to find success; the epilogue that shows the timelessness of the music. It’s all there, alive and well. The problem with this structure, and most biopics in general, is that it’s a feeble and oft unsuccessful attempt to create a “Greatest Hits” album of someone’s entire life. As a result, biopics can’t help but feel episodic, derivative, and eventually aimless. “Jersey Boys” is no exception, but it does provide, in spades, one thing that most biopics refuse to offer: fun. Instead of taking itself and its real-life subjects far too seriously, “Jersey Boys” basks in the absurdity of how The Four Seasons came to light. The name changes, the side gigs, the rapport between each member of the band; most of it is played for laughs in a refreshing and exciting way that keeps the movie from losing steam throughout its 137 minute running time.

Cinematographer Tom Stern shoots the film as both an homage to the 1950s but also as if the viewer were watching from the seat of a Broadway theater. The set design by James Murakami emulates that of a staged production, and there’s an appealing intimacy that arises from the illusion that these actors are standing right before our eyes. However, the sound mix by Wesley Claggett and Walt Martin is a letdown in comparison. The musical numbers often sound too polished in the context of the scenes in which they’re performed, and the third act reveal of “Can’t Take My Eyes Off You,” which was arguably Frankie Valli’s biggest hit, is a sedated rendition of a powerful, booming anthem of unconditional love.

Every member of the main cast, including John Lloyd Young who is reprising his role from the Broadway show, is fantastic, with no weak spots in the bunch. Young’s transition to screen acting is nearly flawless, and it’s no exaggeration to say that, without him and the other three actors who played The Four Seasons, the film would have completely fallen apart. Among them, the standout is undoubtedly Vincent Piazza, who turns in one of the year’s best performances as Frankie’s irresponsible, selfish, borderline sociopathic best friend. Credit should also be given to Eastwood, who refused to indulge in the box office numbers that come with hiring an A-list cast. In an age where leaning on the easy money of star power is such a popular thing to do, watching a director boldly maintain the integrity of a project’s vision is admirable.

Eastwood decides to cleverly break the fourth wall throughout the film as both a form of narration and as a way to allow each character to defend his perspective of events transpired. After a certain point, watching each member of The Four Seasons turn his head to the camera becomes the most exciting part of the film because the viewer finally gets to hear what that member of the band has to say about a particular incident. Subtly, Eastwood doesn’t call upon Frankie Valli himself to acknowledge the audience until the end of the film, instead allowing his bandmates to speak for him and maintain the angelic nature of Frankie’s presence and voice. Yet, when Frankie does address the viewers at the end of the film, it’s because he’s finally taken control of his own life and feels capable of telling his own story. It’s the only moment of catharsis in the film that works, and it’s an excellent way to close the film.

Where the film falters to a nearly devastating effect is its refusal to dig deeper into the drama surrounding The Four Seasons past what any given scene requires. Like Eastwood’s other biopics of the last decade, there’s no notable passage of time sans a time card at the beginning of the film that reads 1951 and one at the end that reads 1990. Anything between that is fair game, and the way the film casually jumps from year-to-year establishes a vague and impersonal tone that renders the potentially emotional third act entirely ineffective, with a melodramatic tone that veers dangerously close to “made-for-TV” quality. Certain sequences are set up as emotional catharsis, but the lack of context allows them to lay there, lifeless, until the next scene comes along.

One especially poor subplot involves Frankie’s daughter Francine, who is just a young girl in one scene, and a rebellious teenager in the next. Then, it’s said that she has a voice that’s even better than Frankie’s, but before we can even hear her sing a note, Francine dies of an unspecified complication. Some pills are mentioned, but there’s nothing leading up to or following the reveal that lends any more information as to what could have possibly happened. It’s just laziness on the part of the filmmakers for not including details like this that could have filled in the film’s cavernous interior. Like many jukebox hits of the era, “Jersey Boys” is all surface energy with nothing underneath to discover.

However, having not seen the Broadway musical, I can comfortably say that Clint Eastwood, at the age of 84, has successfully adapted, at the very least, the energy of the play to the big screen. Making the decision to transition the film from musical to music-based biopic was well-advised, and it serves the story well to have characters performing their hits on-stage instead of randomly breaking out into song. As a sum of its parts, “Jersey Boys” is nothing special, but the performances are fantastic and every scene is so energetic and enjoyable that it’s impossible to hate. Eastwood employs a wealth of directorial subtleties that elevate the film from formulaic to surprisingly personal, most notably a curtain call credits sequence that ends with the entire cast silently holding position, gracefully awaiting applause. If there’s some message that Eastwood is trying to send, it’s that music keeps the musician young. No matter how bad things got, The Four Seasons were always just those Jersey boys, making music and magic under a lowly Belleville street lamp.

Josef Rodriguez is a writer, filmmaker, and musician living in New York City. He is often labeled as "that guy who didn't love Boyhood" and he finds himself liking Harmony Korine films more than he likes his own friends. When he's not stressing over turning in reviews on time, Josef can be seen playing guitar, watching "Spring Breakers," or trying to write the next great American movie.
You might also like
Christopher Walkenclint eastwood

by Janneke Parrish on February 15, 2015
A View to Kill gives us our last unfortunate view of Roger Moore.
Comments
Leave a reply
Add Comment Register

END_OF_DOCUMENT_TOKEN_TO_BE_REPLACED
Taylor Sinople Picks: The 16 Best Films of 2016
Form and Function in Alex Ross Perry’s “Queen of Earth&...
Digging for Fire and Unexpected: Husband and Wife Process Parenthoo...
Every Thing Will Be Fine 3D Review