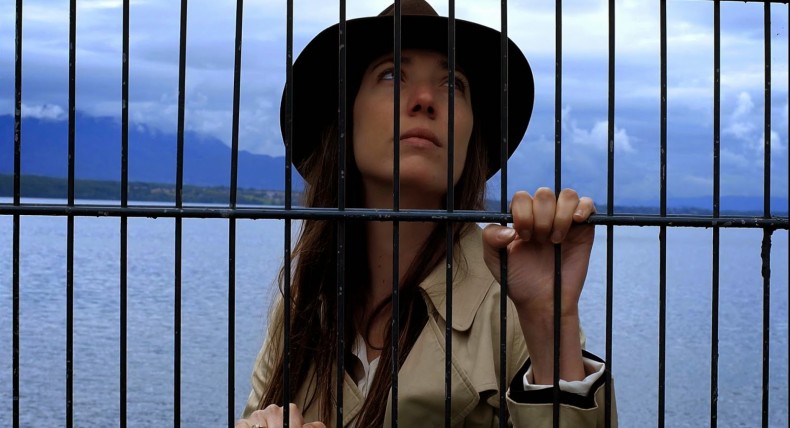 New Wave director Jean-Luc Godard has never been a fan of plot, structure, explicit narrative, or any kind of conventional filmmaking techniques. Even his most simplistic films are known for revolutionizing cinema entirely, and his influence on film has solidified his status as a living legend. In recent years, the director has taken an even more experimental approach, directing some truly baffling pieces of work.

His most recent work, “Goodbye to Language,” is unclassifiable on nearly every conceivable level. The only way to describe it would be to say that it vaguely resembles what might happen if a man with no sensory perception tried to remake “Breathless,” using only the vague memories of a time when somebody described the movie to him using as few words as possible. This isn’t to say that Godard’s film is amateurish, it’s possibly the most innovative utilization of 3D ever put to the screen, but it’s also exasperatingly dense and almost incomprehensible.

The story, if it can even be called that, revolves around a man and a woman, presumably in some kind of romantic relationship, walking around a house in the nude while a dog ventures off into a forest, exploring the outside world. However, most of the film is comprised of repurposed footage, including everything from antiquated World War II footage to a clip of Alexandre Aja’s 2010 “Piranha 3D” remake.

It seems like, on some level, Godard is presenting this film as a joke on the audience. Perhaps he’s toying with the idea of 3D and his status as a living legend of cinema. After all, the pairing of 3D with an octogenarian New Wave director isn’t one that anyone could have predicted in the foreseeable future, and it’s precisely because of this that Godard is well within his means to employ the 3D however he sees fit.

For instance, there are moments in this film, most notably the GoPro shots of Godard’s real-life canine companion, that border on mundane and even unwatchable. Godard either knows this and doesn’t care, or he’s making an honest attempt to get at the core truth of what digital cinema, and by extension 3D, is truly capable of, while at the same time toying around with the idea of his public image as a living, breathing piece of cinema history. He even goes as far as listing the cameras, and their respective frame rates, used to make the film, as if telling the audience, “If you think you can do what I do, here are the tools to go and do it.”

However, there are moments of “Goodbye to Language” that are just so hopelessly pretentious as to completely drain all of the meta-humor that comes as a result. The discussions about mass-produced technology functioning as Hitler’s dream-come-true scenario, and the conversation about how shitting is the one thing that equalizes all human beings, are interesting in their own right, but Godard frames them with extremely turgid language and stereotypically “French art film” set-ups, in a way that’s seemingly intentional.

Godard’s been making films for longer than most people have even been alive, and he knows more about the mechanics of a good scene than just about anyone, so his decision to include these scenes is perhaps a comment on audience expectation of French video art or, again, Godard’s persona. However, he’s not completely successful in the execution of these scenes, regardless of intentionality, because they still play out like dull, navel-gazing art installations.

There’s no denying Jean-Luc Godard’s influence on cinema, from his earliest work in “Breathless,” to his experimental, sometimes unwatchable, art videos of the 1980s and 90s. As the years have gone by, Godard’s work has become more radical, utilizing technology in a way that most directors never do. At 83, the French director has directed his most frustrating and undeniably brilliant work yet.

Nearly every scene of Godard’s film applies 3D in ways that have never been attempted. There are moments where the audience member must close one eye to see a certain image, then alternate their vision to see another. Other times the object in 3D is something as seemingly arbitrary as one piece of a dock or a woman’s shoulder. In short, Godard revolutionizes the mere concept of 3D by turning it into both a farce and a thing of inexplicable beauty. He may be saying “Goodbye to Language,” but he is most definitely saying hello to something else entirely.

Josef Rodriguez is a writer, filmmaker, and musician living in New York City. He is often labeled as "that guy who didn't love Boyhood" and he finds himself liking Harmony Korine films more than he likes his own friends. When he's not stressing over turning in reviews on time, Josef can be seen playing guitar, watching "Spring Breakers," or trying to write the next great American movie.
You might also like
Goodbye to Languagejean-luc godard

by Vivek Suvarna on May 26, 2014
Now that Cannes 2014 is over, let's check out ten of the most promising films that screened at the festival.
comments
Leave a reply
Add Comment Register

END_OF_DOCUMENT_TOKEN_TO_BE_REPLACED
Taylor Sinople Picks: The 16 Best Films of 2016
Form and Function in Alex Ross Perry’s “Queen of Earth&...
Digging for Fire and Unexpected: Husband and Wife Process Parenthoo...
Every Thing Will Be Fine 3D Review