Reviews
0
previous article
Japanese Noh More: The Gothic Side of Kurosawa's "Throne of Blood" (1957)
next article
Review: The Imitation Game 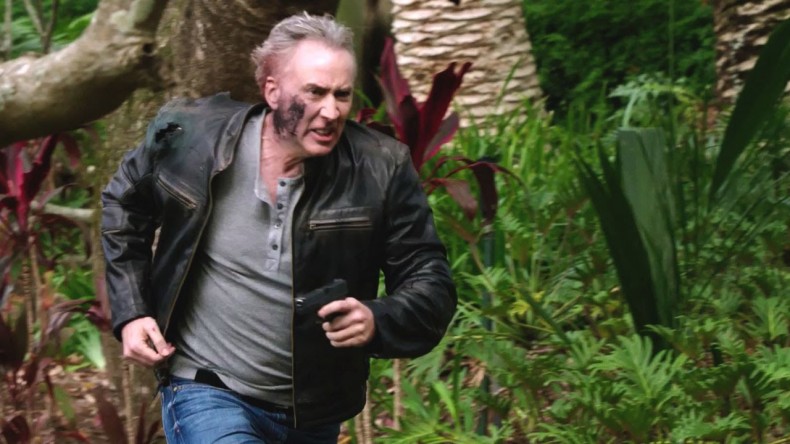 Paul Schrader’s troubled mystery-thriller “Dying of the Light” is extinguished by an undisciplined Nicolas Cage performance and a lack of thematic clarity.

“Don’t be melodramatic,” advises CIA agent Evan Lake (Nicolas Cage) to his younger partner in the third act of Paul Schrader’s “Dying of the Light.” It’s good advice for an intelligence officer in his mid-20s already making noises about retirement, but perhaps would have been most useful if absorbed by Schrader and Cage during the production of this scattered and overheated mystery-thriller. Hobbled by writing and editing that is too clumsy to be genuinely, well, thrilling, the film staggers around like Cage’s frequently intoxicated and excitable character, awkwardly pivoting between an elegy for true American heroes and Lake’s troubled personal journey for revenge and closure.

Longtime agent Lake pairs with Milton Schultz (Anton Yelchin, glowering) — apparently the only officer at the CIA who trusts and confides in Lake — to settle scores with a terrorist that once menaced Lake and was long thought to be dead. Perhaps inspired by Showtime’s “Homeland,” we are also told early and often that Lake has a frontal-lobe neurological disorder that causes mood swings and confusion, and that will eventually kill him. Increasingly erratic, Lake is removed from his primary agency task of delivering vague speeches about American values to new recruits, and pushed into retirement. He and Schultz then set about mounting an off-the-books mission to Bucharest to track down the terrorist.

If the words “erratic” and “Nicolas Cage” in close proximity cause you some anxiety or concern about the pitch of the film’s central performance, you may wish to avoid “Dying of the Light.” Cage and Schrader use the old “frontal-lobe neurological disorder” trope as a license for Lake to indulge in multiple profane or loopy outbursts, which is to say this is the latest Cage performance marked by profane or loopy outbursts. Some directors can channel this style into a convincingly unhinged performance (Werner Herzog’s “Bad Lieutenant: Port of Call New Orleans” being the best recent example), but here it’s simply unintentionally funny overacting. When Lake loudly berates a Romanian waiter over smoking regulations, employs a broad Eastern European accent or greets a bad guy with “As-salamu alaykum, asshole,” it speaks only to the production’s lack of discipline and relative value to future YouTube compilations.

Although the film makes early noises about grappling with America’s standing in the world, these themes fade as the film continues. Aside from a bombastic speech Lake delivers — name dropping 9/11 and Benghazi and criticizing a superior for failing to question President Obama — Schrader’s screenplay doesn’t grapple with broader geopolitical issues, and a late exchange about religious fundamentalism seems like the shoehorning of a Wikipedia summary into the dialogue. This might have been better off as a paranoid intelligence thriller; instead, the Evan Lake character may as well be a city cop, grieving father or appliance salesman out for vengeance.

It’s ultimately difficult to assign clear responsibility for the film’s failures to a particular party, as the film was apparently ripped away from Schrader in post-production and completed without his creative input. This could account for the aimless, repetitive third act, as well as unusual explosions of gruesome violence that are at odds with the introspective aims of the rest of the film. Nonetheless, short of a director’s cut to prove otherwise, “Dying of the Light” is deeply unsatisfying.

Adam resides in Halifax, Nova Scotia, and enjoys running and trying to build a better veggie burger when he's not mainlining cinema. His preferred Peter Gabriel album is Peter Gabriel (Melt), and he dreams of someday buying a Eurail pass.
You might also like
Anton Yelchinnicolas cage

by Josef Rodriguez on November 2, 2014
Despite its heavy material, “Rudderless” is an enjoyable and surprisingly fun movie that sometimes veers into manipulative territory, regardless of how watchable it may be.

END_OF_DOCUMENT_TOKEN_TO_BE_REPLACED
Taylor Sinople Picks: The 16 Best Films of 2016
Form and Function in Alex Ross Perry’s “Queen of Earth&...
Digging for Fire and Unexpected: Husband and Wife Process Parenthoo...
Every Thing Will Be Fine 3D Review