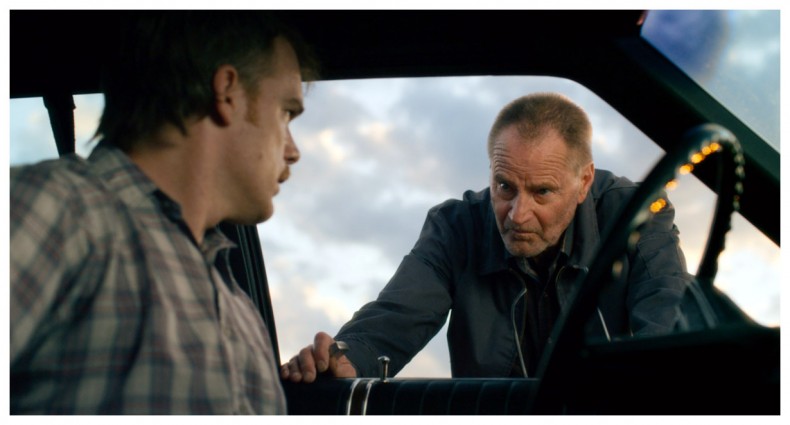 "Cold in July" is a deceptively engrossing thriller that unfolds like an 80's drive-in throwback.

Richard Dane (Michael C. Hall) isn’t a murderer, at least not yet. Then, a home invasion. His eyes open in the middle of the night and there’s a noise coming from the living room. He fumbles with a pistol and creeps down the hallway towards the ruckus, passing his baby son’s room, until he sees the intruder’s flashlight searching through his house. He fires, the man falls back, dead. But it’s far from over.

The year is 1989. After killing the man the police tell him is named Freddy Russell (Wyatt Russell), the illusion of rural safety is shattered for Rich and his wife (Vinessa Shaw). The shock of that night eats away at Rich, the quiet owner of both a picture frame shop and a well-dated mullet cut. He bars up his home’s windows and has trouble sleeping. The danger resurfaces when Ben Russell (Sam Shepard), the father of the man he killed, shows up looking for revenge. Rich is at the police station attempting to convince an officer that his family is in serious danger when he comes upon Freddy’s mugshot and doesn’t recognize the man and realizes — he didn’t kill the man everyone says he did.

“Cold in July” is an inverted bell curve of an experience (Google tells me this is called a “well curve”). Director Jim Mickle kicks things off with a bang, but then the film gets worse, then much, much better. This all has to do with the in-theatre experience of realizing that you’re not watching the movie you thought you were, but you might just love it anyway. It comes down to poor promotion that leads the viewer into the film expecting a run-of-the-mill thriller. So when a few artistic choices show up here and there that work against the established sense of realism in today’s crime thrillers, it can be confusing. “Cold in July” isn’t a run-of-the-mill thriller, it’s 2014’s “Drive” – an 80’s drive-in throwback that’s as deliciously dark as it is fantastically moody.

The sooner you come around to Mickle’s vision, the sooner you can start to see something like the pervasive bright blue night-time lighting as a stylish strength, not a reality-offending weakness. Unprepared viewers, though, will have a tricky adjustment period in which something like a sudden reveal of Sam Shepard in a dark room during a burst of white lightning flash can feel a bit cheesy. By the third act, we’re in full-out graphic novel mode with the lighting glowing in bright neon colors and the violence startling and bloody.

Ryan Samul, cinematographer, leans heavily on camera tricks and little stylistic movements to edge Mickle’s film into the era it takes place in. Most of this stuff is style for style’s sake, though. The camera tilts from a close-up as Rich gets into his 70’s station wagon down to the grill of the car to catch the metal headlight plates flip open and the beams flick on. It doesn’t mean anything, but it looks cool. Same goes for the excellent score that, like “Drive,” sounds like we wish the 80’s had sounded. Composer Jeff Grace shines with tracks like “Cosmo Black” that give the film an ominous flavor with the dancy drones of synthesizers.

“Cold in July” isn’t exactly the film we needed to establish Michael C. Hall as a versatile film actor. Mickle ended up casting Dexter, the character, more than he did Hall, the actor. The seemingly good-hearted side of Dexter is on display here, stripped of all murderous impulses but nonetheless very much the character we know from television. Don Johnson, of all people, ends up rising to the top of the performances as Jim Bob – a private investigator with cowboy boots and a bullhorn hood ornament on his bright red car. Johnson’s comic relief is the main element that keeps the second half from feeling like one big excuse to set up a brutal shootout.

Mickle, working off Joe R. Lansdale’s pulp novel, brings to this 80’s period thriller all of the fantasy of his horror work (“We Are What We Are”), but drags along the lack of subtlety of that genre, too.  As we learn about the possibility that Freddy is still alive, “Night of the Living Dead” plays on a television in the background. High brow it is not, but “Cold in July” lives up to its evocative title – grimy, chilling, and stylish.

Taylor is a Chicago-based writer and aspiring film historian. He is the editor here at TFP, and has contributed to a number of international publications such as Cinema Scandinavia, PopMatters, and Room 101 Magazine. He can also be found listening to podcasts, researching topics he has little use for, or running after a city bus.
You might also like
Sam ShepardWyatt Russell

END_OF_DOCUMENT_TOKEN_TO_BE_REPLACED
Taylor Sinople Picks: The 16 Best Films of 2016
Form and Function in Alex Ross Perry’s “Queen of Earth&...
Digging for Fire and Unexpected: Husband and Wife Process Parenthoo...
Every Thing Will Be Fine 3D Review