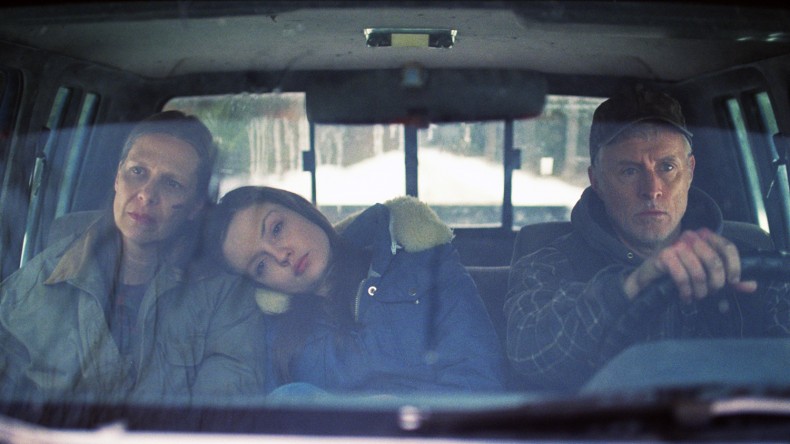 Bluebird joins the long list of small-town-tragedy dramas, and its insincere performances and underdeveloped screenplay only serve to confirm the inherent shortcomings of the genre, that of aesthetic beauty but a total lack of actual substance.

Somewhere in a Maine logging town, a caring bus driver for the local elementary school, Lesley (Amy Morton), has her life turned upside down when, after one of her daily routes, she accidentally leaves a child on board through the night, sending him into a hypothermic coma. The boy’s young mother, Marla (Louisa Krause), forgot to pick him up that day at his usual stop, while his grandmother, Crystal (Margo Martindale), is seriously questioning her daughter’s aptitude for parenthood. Meanwhile, Lesley’s husband Richard (John Slattery), a logger himself, further absorbs himself in his work, leaving Lesley and their teenaged daughter Paula (Emily Meade) to suffer their own demons, Lesley’s guilt and Paula’s blossoming and potentially unhealthy relationship with a boy from school.

Shot with a somber 35mm aesthetic, Bluebird sets its sights on exploring the psychology behind the small town tragedies that have defined films like Little Accidents, The Sweet Hereafter, and God’s Pocket. However, all comparisons aside, Lance Edmands’ debut film isn’t always substantial enough to justify its existence. It tackles ideas that have been explored in other films, only with lower stakes and an even less-developed ensemble of characters and situations that ultimately lead to – of course – an ambiguous ending that does nothing but feign artistic ambition and corroborate this notion that low budget indies are quickly becoming a forum for visually appealing but ultimately spineless movies without substance.

The central performance by Amy Morton is very good, there’s no question about that, but she’s surrounded by actors who insist on doing actorly things, including some bizarre work by John Slattery, who manages to give too much of a performance while not giving a performance at all, a criticism that could apply directly to his effort as an auteur on God’s Pocket, which felt both hopelessly bleak and stylistically appealing but ultimately vapid of any content. Otherwise, Bluebird’s various plot strands are too singular to cohere into anything more than a series of vignettes that end up not really having much bearing on the outcome of the film, which approaches as quickly as it ends, in a badly written attempt to tie everything together in the final fifteen minutes.

The 35mm cinematography by Jody Lee Lipes, a regular DP on HBO’s Girls as well as Judd Apatow’s upcoming Trainwreck, is good, but not good enough to excuse the reliance on aesthetics that films like Medeas can get away with just for being so damn beautiful. In contrast, Bluebird isn’t too bad on the eyes, but it doesn’t have that transcendent quality that it so desperately needed to infuse the narrative with something more than grim stoicism. Without it, Bluebird is another unsatisfying drama that leaves its viewers with more questions than answers, and they aren’t exactly the questions that writer-director Lance Edmands intended to leave us with. In fact, I think the worst thing a film can do is leave its audience with the question, “so what?”

Josef Rodriguez is a writer, filmmaker, and musician living in New York City. He is often labeled as "that guy who didn't love Boyhood" and he finds himself liking Harmony Korine films more than he likes his own friends. When he's not stressing over turning in reviews on time, Josef can be seen playing guitar, watching "Spring Breakers," or trying to write the next great American movie.
You might also like
Adam DriverJohn SlatteryMargo Martindale

by Josef Rodriguez on September 21, 2014
“This is Where I Leave You” needs to be left alone. It wastes the year’s best cast with a cliched, schlocky, and dull script that does its performers absolutely no favors.

END_OF_DOCUMENT_TOKEN_TO_BE_REPLACED
Taylor Sinople Picks: The 16 Best Films of 2016
Form and Function in Alex Ross Perry’s “Queen of Earth&...
Digging for Fire and Unexpected: Husband and Wife Process Parenthoo...
Every Thing Will Be Fine 3D Review