Reviews
3
1
previous article
Review: The Internet's Own Boy: The Story of Aaron Swartz
next article
Double Exposure: They Came Together 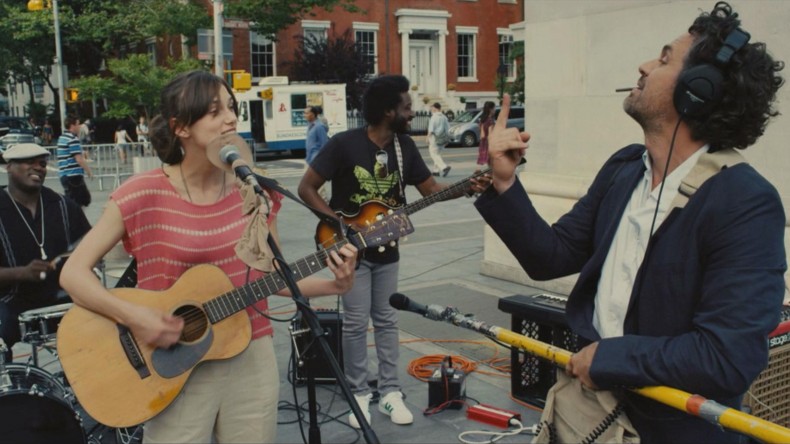 Equal parts cheesy and heartwarming, "Begin Again" is a musical drama that circles around cliche but emerges mostly on the side of authenticity thanks to strong music sequences and a committed performance from Mark Ruffalo.

John Carney returns to the musician’s struggle in “Begin Again:” a spiritual follow-up to his 2006 breakout film “Once.” A once-iconic record label exec turned alcoholic-loser-dad (Mark Ruffalo) finds himself out of a job when current trends in music pass him by. Left depressed by the lack of real talent and the commoditization of artists in the industry, an unknown indie musician (Keira Knightley) playing an open mic night at an NYC bar reignites his passion for producing music and making hits from humble beginnings. He agrees to produce and record her demo album, but without any money to pay for studio time they instead take to the streets – recording in iconic New York City locations and letting the tape roll no matter what – sirens, crowd noise and all.

Carney proves to be still capable of using music as the primary communicator of plot, although “Begin Again” works to a lesser effect than the raw and intimate “Once.” Major plot turns are handled through songs rather than dialogue, and Carney does capture the magic of the production process – when musicians come together and drum up beautiful arrangements in the moment.

There’s a lot of gloss thrown onto this project, though, and it can work against the intended authenticity of the story. Neither of the big name actors, Knightley and Ruffalo, are quite believable in their roles, so the relatively unknown English actor James Corden is a godsend by the time he appears as a street musician not unlike Glen Hansard’s character in “Once.”

This mid-budget Hollywood space isn’t necessarily conducive to Carney’s style of storytelling. Less would be more here, but he struggles with form in both bookends of the film. He opens with a flash-forward for no real reason but to shake up the structure, and closes with an epilogue scene that runs the entire length of the credits. Where a gag reel or maybe a quick, snappy post-story scene often work during the credits, there is instead a full scene here that has no excuse for not being in the movie proper other than that it couldn’t be cleanly edited in.  And while the irony of casting Maroon 5’s Adam Levine into the film as a singer-songwriter-turned-superstar doesn’t maximize its potential, Carney nonetheless has made a feel-good summer celebration of a film that ends on just the right note. So let’s hope he irons out these wrinkles in time for his next film – another musical drama currently titled “Sing Street” slotted for a 2015 release. Because the world deserves more Carney pictures that delicately fuse music and film, but he needs to be making his film, not that film.

Taylor is a Chicago-based writer and aspiring film historian. He is the editor here at TFP, and has contributed to a number of international publications such as Cinema Scandinavia, PopMatters, and Room 101 Magazine. He can also be found listening to podcasts, researching topics he has little use for, or running after a city bus.
You might also like
James CordenKeira Knightleymark ruffalo

by Marcus Michelen on January 14, 2015
"Into the Woods" is a safer, simpler adaptation of Stephen Sondheim’s seminal musical, but Rob Marshall’s family-friendly film is still a fun and moving musical with strong performances.
comments
Leave a reply
Add Comment Register

END_OF_DOCUMENT_TOKEN_TO_BE_REPLACED
Taylor Sinople Picks: The 16 Best Films of 2016
Form and Function in Alex Ross Perry’s “Queen of Earth&...
Digging for Fire and Unexpected: Husband and Wife Process Parenthoo...
Every Thing Will Be Fine 3D Review