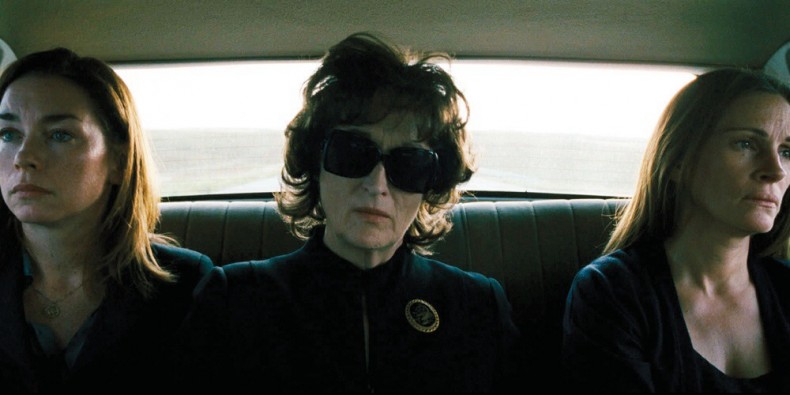 Adapted from the Pulitzer Prize winning play of the same name, the spectacularly acted and written “August: Osage County” assembles a first-rate female ensemble to do what Oscar season films do best.

“Violet, my wife, she takes pills,” Beverly Weston tells her, “sometimes a great many.” Johnna is interviewing for a job in Beverly’s (Sam Shepard) very large and very empty Oklahoman home. She is to be tasked with preparing food, cleaning, and driving Beverly’s wife to chemo treatments for her mouth cancer. Just as Beverly is remarking on the irony of his wife’s illness considering her inability to control her mouth in her near constant criticisms, Violet Weston (Meryl Streep) herself enters the room. Reeling on prescription drugs and smoking a cigarette, she makes her objection to the coincidentally Native American Johnna (Misty Upham) known immediately – a reminder that some still know the phrase “injun” – before losing herself in cycling trains of thought and unceremoniously exiting the room after offending both of the people inside of it.

Meryl Streep is nearly unrecognizable in this opening scene, both in appearance and mannerism. Director John Wells (“The Company Men”) wisely chooses when to play Streep’s mania for laughs only to turn it around into something very much not funny only moments later.

Families are known to harbor acrimony for years – storing up that bitterness for the big event that forces it all into the open. Soon after we witness this conversation, Beverly goes missing and Violet’s estranged family returns to Osage County to help in the search. They are the three daughters: Barbara (Julia Roberts) – the one that keeps in touch, Karen (Juliette Lewis) – the one that lost contact entirely, and Ivy (Julianne Nicholson) – the one that never left. Violet’s equally harsh sister Mattie (Margo Martindale) also shows up along with her kind-tempered husband Charles (Chris Cooper) and timid son Little Charles (Benedict Cumberbatch). Filling out the rest of the supporting cast are the spouses and children (Ewan McGregor, Dermot Mulroney, and Abigail Breslin). Reunited in concern for Beverly more than support for Violet, the Westons once again fill the old country home to catch up on lost time and rediscover what drove them apart in the first place.

Tracy Letts first wrote about the Weston family for a theatrical production at Chicago’s Steppenwolf Theater in June 2007. The play went on to Broadway later that year and Letts won a Pulitzer Prize for Drama for the original script that he adapted into the screenplay for this film. With the exception of two or three exterior sequences, “August: Osage County” the movie isn’t so different from “August: Osage County” the Tony-award winning play. The film is almost entirely dialogue conducted with true virtuosity. When the characters are talking (arguing, whispering, yelling, and gossiping) for two hours, rhythm becomes crucial. Wells’ film finds its melodies and crescendos by giving us scenes that match up various combinations of the distinct characters – digging deeper into the past connections between sisters and in-laws while forging new ones to varying degrees of success.

The now full Weston house is full of secrets. Two of its residents are in a forbidden romance, others hold a deep resentment. It all culminates in a monumental 19-page, 20+ minute scene in which all eight characters eat dinner together and partake in sharing memories, jokes, and bitter arguments. This is a masters course study of dialogue – a total spectrum of emotion from the endearing teasing of Barbara’s daughter’s (Abigail Breslin) vegetarianism to explosive anger when Violet begins to provoke Barbara about her failing relationship with husband Bill (Ewan McGregor).

“August: Osage County” is brimming with high stake, emotional, family-centered drama – an “Ordinary People” for a new generation. The term “histrionics” may come to mind, but the power of Letts’ screenplay and the entire cast’s raw performances keep melodrama at bay and a wrench-tight grip on your attention. The showdown is on for Best Supporting Actress recognition – Streep, Roberts, and Martindale (the film’s secret weapon) each put in remarkable work. Roberts dials down her “America’s sweetheart” empty likeability for much more complex emotions, and Streep stands at the helm of it all with a truly career-high execution of Violet’s neurosis.

Outside of the house, cinematographer Adriano Goldman (“Closed Circuit”, “Sin Nombre”) brings “Oh-sage” County to life where the theatrical production could not. Goldman is smart here, and doesn’t indulge in any beautification of the setting that doesn’t come from simply setting up a static composition and letting the camera roll. By getting a sense of the rural setting, we come to a better understanding of why the Weston daughters flew the coop as young adults. In one emotional scene, Violet wanders far into an endless field of wheat bales pursued by Barbara. “Where are you going?” Barbara asks her, “There’s nowhere to go.”

This is a nearly perfect drama. Engaging, surprising, funny, and smart. Hyperbolic in its narrative turns – maybe. But “August: Osage County” packs a hell of a punch, and is the year’s greatest victory for women in Hollywood. At a recent screening of the film, writer Tracy Letts was asked – as a presidential-looking middle-aged white man known for a career in the arts – where these rural, outlandish characters came from, and whether he knows people like them. He answers, “Yeah, I do. It’s my family. And unfortunately, it’s yours too.”

Taylor is a Chicago-based writer and aspiring film historian. He is the editor here at TFP, and has contributed to a number of international publications such as Cinema Scandinavia, PopMatters, and Room 101 Magazine. He can also be found listening to podcasts, researching topics he has little use for, or running after a city bus.
You might also like
Benedict CumberbatchDermot Mulroneyjuliette lewisMargo Martindale

END_OF_DOCUMENT_TOKEN_TO_BE_REPLACED
Taylor Sinople Picks: The 16 Best Films of 2016
Form and Function in Alex Ross Perry’s “Queen of Earth&...
Digging for Fire and Unexpected: Husband and Wife Process Parenthoo...
Every Thing Will Be Fine 3D Review