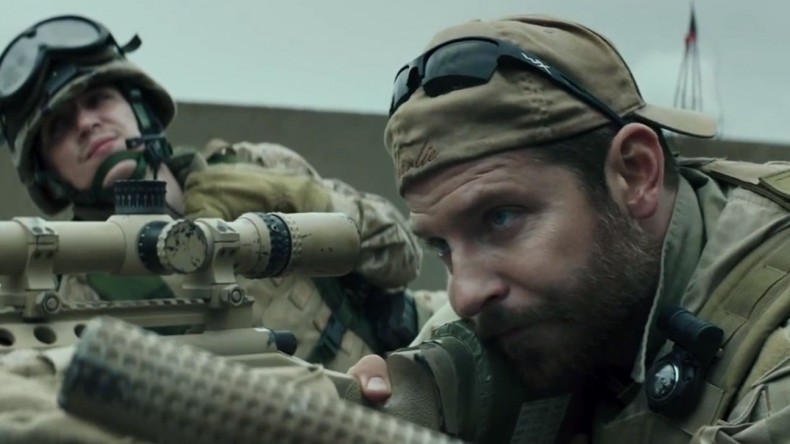 Despite a phenomenal performance from Bradley Cooper, and some of the year’s best cinematography by Tom Stern, American Sniper never does justice to its late hero in the way that it sets out to.

The requisite Oscar biopic that serves as a metaphor for the way we live today are among the most tedious to be released every single year, and they’re often the worst films on the short list for an Academy Award. The most premature of this year’s candidates has to be Clint Eastwood’s American Sniper, a film about a Navy SEAL named Chris Kyle (Bradley Cooper) who was deemed the most deadly sniper in US military history with 160 confirmed kills.

Eastwood’s film depicts his life as a military man, traveling through the Middle East through four tours as a SEAL while his wife (Sienna Miller) stays home to raise their two children. Interspersed towards the beginning of the film are scenes of Kyle’s childhood, where his father instills lifelong lessons about being neither a sheep nor a wolf but a sheepdog, as well as the ongoing hunt for a rival sniper known as Mustafa (Sammy Sheik). As the hunt for Mustafa results in more and more deaths in his infantry, Kyle is subjected to harsh bouts of PTSD during his ten years in the service.

Watching American Sniper is akin to watching your older brother play Call of Duty for three hours and having to sit through all the unnecessary cut scenes between missions. Your avatar is Chris Kyle, and your mission throughout four tours as a SEAL is to capture and kill the most notorious rival sniper in Afghanistan. Obviously, Eastwood (always a starkly conservative cinematic voice) didn’t intend for this to be the case, but Jason Hall’s script doesn’t allow Kyle to tell his own story.

Instead, the film relies on a number of fictionalized contrivances and arcs to get its point across, and the result is a mixed bag. On the one hand, Bradley Cooper gives what may be the strongest performance of his career. Slapping on a Texan accent and playing an American war hero is no easy feat, and Cooper does it successfully without turning his performance into a caricature or an imitation. He truly embodies the mind and spirit of Kyle, and without him the film would be a complete disaster, more so because Eastwood refuses to pull his focus from Kyle for more than five seconds at a time.

Even if one could forgive the fact that every subsequent tour in the film feels like the next level in a game, Eastwood directs the domestic scenes as if Cooper and Miller were guest starring for a handful of episodes on a daytime soap. The morality of it is so frustratingly Old Testament (the rip-roaring girl must be saved by the noble, respectful man), and Hall’s dialogue is so on-the-nose as to completely rip any possible subtext from their scenes together.

It’s so cut-and-dry biopic and the film would have probably been better off without them, despite how integral they are to Kyle’s character. His wife and children are his motivation, but Eastwood stages these scenes as a nuisance to the character and not necessarily as a man struggling to connect with the people he loves. In contrast, the combat sequences are by and large the best in the movie on an individual level, but the repetitive nature of watching Kyle go back and forth detracts from the strengths of both.

However, even when the words being spoken on screen reach an unbearable level of schmaltziness, cinematographer Tom Stern’s imagery is as compelling as ever, and a third-act battle sequence in the middle of a sandstorm will surely go down as one of the most visually thrilling scenes of the year. Nearly every shot in this movie is framed and colorized to perfection, and American Sniper benefits from looking as good as anything shot by Roger Deakins or Janusz Kaminski in the past decade.

As Eastwood’s second biopic of 2014, American Sniper is everything that Jersey Boys is not. Where Eastwood’s interpretation of Frankie Valli is silly and deeply flawed in its own right, it’s a watchable, entertaining adaptation of Valli’s life that embraces its own cheesiness and will undoubtedly appeal to those who know what they’re getting into. American Sniper, on the other hand, demands to be taken seriously, but doesn’t have enough balance or honest-to-god greatness to earn that association. It so badly wants to be the best movie of the year, but it’s nowhere close. Enlist at your own discretion.

Josef Rodriguez is a writer, filmmaker, and musician living in New York City. He is often labeled as "that guy who didn't love Boyhood" and he finds himself liking Harmony Korine films more than he likes his own friends. When he's not stressing over turning in reviews on time, Josef can be seen playing guitar, watching "Spring Breakers," or trying to write the next great American movie.
You might also like
American Sniperbradley cooperclint eastwoodKyle Gallner

by Marcus Michelen on January 19, 2015
Every year, the Academy of Motion Picture Arts and Sciences names a single film as the Best Picture of the year. Most film nerds and critics don’t take The Oscars too seriously, but for some reason, every Oscars ceremony feels like The Super Bowl for us. Odds are calculated, lists are made, and one film […]
comments
Leave a reply
Add Comment Register

END_OF_DOCUMENT_TOKEN_TO_BE_REPLACED
Taylor Sinople Picks: The 16 Best Films of 2016
Form and Function in Alex Ross Perry’s “Queen of Earth&...
Digging for Fire and Unexpected: Husband and Wife Process Parenthoo...
Every Thing Will Be Fine 3D Review