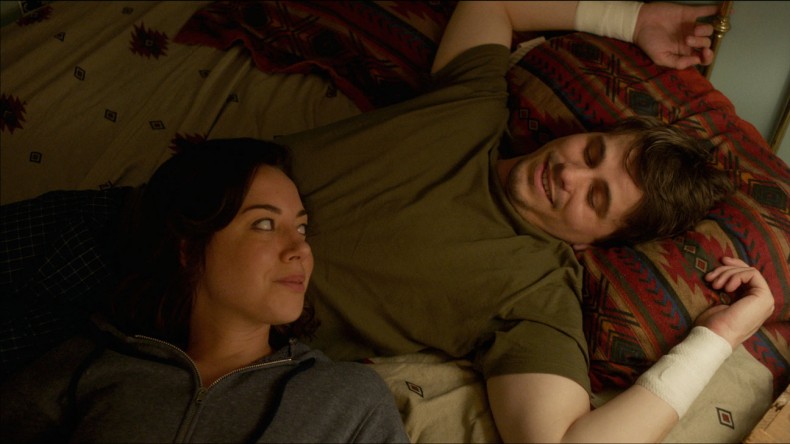 Although “About Alex” would have a better time proudly advertising itself as the blatant remake that it is, it’s as compulsively watchable as the film that inspired it, boasting a strong ensemble and a script that does it justice despite the occasional reliance on cliched plot developments.

Included in the Criterion release of Lawrence Kasdan’s “The Big Chill” is a beautifully written essay by Lena Dunham, the creator of HBO’s “Girls.” Her attempt to evoke the feeling one gets while watching one’s parents bond with old friends is infallibly honest, and the piece perfectly encapsulates what makes “The Big Chill” such a seminal film. “About Alex,” the debut feature of Jesse Zwick (son of Edward), is incontrovertibly a remake of Lawrence Kasdan’s film distinguished only by name, and it occurred to me that if the film could pair itself just as beautifully with Dunham’s essay, it could be considered a success.

Like “The Big Chill,” Zwick’s film opens on a group of friends hearing about Alex. In Kasdan’s film, the character’s suicide was successful. In Zwick’s, it was not. Rushing to the house where the attempt took place, each of them has a unique method of coping, some more extreme than others. Sarah (Aubrey Plaza), a tightly-wound tax attorney, takes to offering Alex sandwiches and water every five minutes while suggesting that he be accompanied by one member of the group at all times. Josh’s (Max Greenfield) approach is much more aggressive, staying adamant on the idea that the group should not, by any means, act like nothing happened. Meanwhile, Ben (Nate Parker) and Siri (Maggie Grace) are in the midst of two major life decisions, while Isaac (Max Minghella), a successful LA businessman, wrestles with his conflicting feelings for his new girlfriend Kate (Jane Levy), a 22-year old suicide hotline operator, and Sarah, who pined for him all through college.

Through all of this, Alex (Jason Ritter) just wants to be left alone. Reassuring everyone that he’s okay, Kate’s expertise allow her to be more in tune with how Alex is really feeling while everyone else’s method of comfort is to smother him with as much love and affection as possible. Neither are very effective, and as each night of the group’s long weekend unfolds, the tension in the house reaches a bubbling point that may separate the group for good.

The distinguishing factor in “About Alex” is Zwick’s decision to keep the titular character alive, whereas “The Big Chill’s” Alex is seen only in a casket, leaving everyone to wonder what might compel him to take such a drastic measure. The Alex in Zwick’s film has a lot to own up to, and the film’s best scenes often involve the character’s own insight into his life before the attempt, his unfulfillment with himself, and ultimately the loneliness that began to encompass his entire being. The character is very well-written by Zwick, and Jason Ritter’s noteworthy performance brings Alex to life in a way that is simultaneously tragic and hopeful. He’s pretty sure he doesn’t want to die, but there’s usually a look of shame in his eyes when someone mentions the attempt, one that speaks volumes in ways that his words never could.

The rest of the cast is equally as strong, though Aubrey Plaza and Max Greenfield bring a third dimension of depth to their performances that is somewhat lacking in the others. Plaza has come a long way since her supporting role in 2009’s “Funny People,” and Zwick’s film gives her a chance to display her range more completely than ever before. Greenfield, on the other hand, takes dialogue that’s endlessly amusing but doesn’t lend itself to much character development, and strikes a miraculous balance between abrasiveness and insecurity that ends up being the most interesting arc in the entire movie.

Maggie Grace, who is known almost exclusively as being a glorified plot device in a handful of Luc Besson films, finally gets the chance to tone down the chaos and give a performance that is clearly more in-line with her skills as an actress. The result is extremely refreshing to say the very least, and her chemistry with Nate Parker, a notable scene-stealer in recent years, makes their scenes together all the more compelling. Jane Levy, who turned heads in 2013’s “Evil Dead” remake, is the delightful surprise of “About Alex.” A character who, in any other movie, would be little more than a running joke is given a decent amount of material to work with and, at a certain point, nearly becomes the emotional crux of the entire film.

The matter-of-factness that she displays when dealings with Alex is a hoot in comparison to everyone’s refusal to take off their kid gloves, and her presence is undeniably a positive force for everyone involved. Levy is absolutely wonderful in the film, and a scene in which she’s called upon to work the hotline for a night generates an unexpectedly poignant moment that validates the film’s more powerful themes of appreciating life and confronting our own emotions, no matter how terrifying they appear to be.

Max Minghella is the only actor who gets shortchanged here, unfortunately, and he’s the closest thing the film has to dead weight. Although the performance is passable, there’s nothing particularly crucial about the character except for a third act development that seemed more like a reason to justify his inclusion. Saddled with a crowd-pleasing character in 2010’s “The Social Network,” Minghella has never been able to live up to that breakout performance although he attaches himself to projects that should replicate that success.

Like his father was in the late 1980s, Jesse Zwick is a unique new voice in cinema who uses a classic framework to invoke some timely issues about modern living. “About Alex” is not going to be this generation’s “The Big Chill,” but it probably could have been, seeing that it’s one of the most compulsively watchable and well-acted ensemble films in recent memory. Zwick conjures up an emotion of intense nostalgia for times, against Josh’s better judgment, that, as an audience, we haven’t necessarily experienced. The film’s unforgettable final shot is one of the best movie endings since Joe Swanberg’s controversial final moments in 2013’s “Drinking Buddies,” and it’s a perfect send-off for a group of characters who, in only 90 minutes, have completely won us over.

I see myself revisiting “About Alex” in the future, sizing myself up with the characters in Zwick’s picture, reassuring myself that I’m still on track or reminding myself that it’s time to jump back on the train. It’s one of those films that, when watched with the right people, can be an intensely cathartic experience that solicits an even greater bond. Having not been born in the Baby Boomer age, I think I can finally grasp the impact that “The Big Chill” had on its demographic when it was released in 1986. And as far as Dunham’s essay, it’s safe to say that the two go hand-in-hand.

Josef Rodriguez is a writer, filmmaker, and musician living in New York City. He is often labeled as "that guy who didn't love Boyhood" and he finds himself liking Harmony Korine films more than he likes his own friends. When he's not stressing over turning in reviews on time, Josef can be seen playing guitar, watching "Spring Breakers," or trying to write the next great American movie.
You might also like
Aubrey Plazajane levyJason RitterMax Greenfield

by Josef Rodriguez on August 21, 2014
“Life After Beth” is a funny, if uneven, zom-rom-com that only explores a fraction of its limitless potential, wasting a horribly misused cast in the process.
comments
Leave a reply
Add Comment Register

END_OF_DOCUMENT_TOKEN_TO_BE_REPLACED
Taylor Sinople Picks: The 16 Best Films of 2016
Form and Function in Alex Ross Perry’s “Queen of Earth&...
Digging for Fire and Unexpected: Husband and Wife Process Parenthoo...
Every Thing Will Be Fine 3D Review