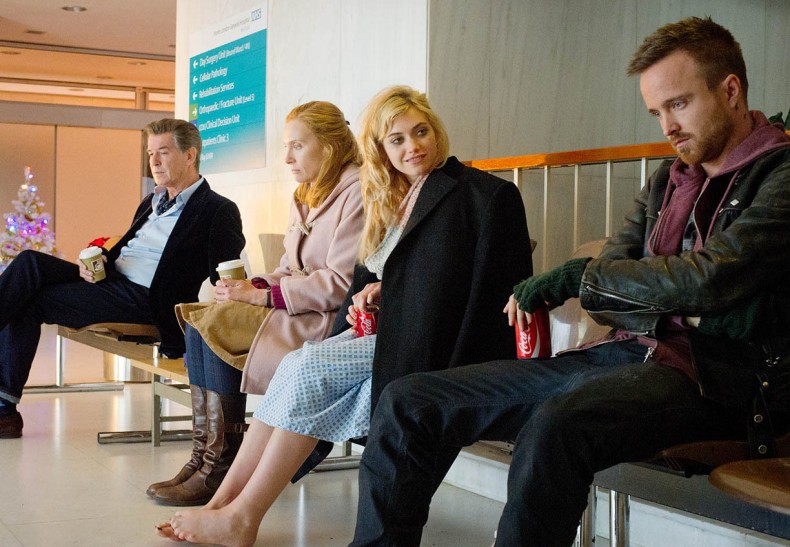 Too short and only reaching the surface level of its stock characters, "A Long Way Down" is all premise and no follow-through despite the best intentions of the cast.

“To cut a long story short, I decided to kill myself. That’s the trouble with suicides, I’ve learned, you can’t cut the long story because it’s the long story that people are interested in. Especially if you’re me – which, regrettably, I was, and still am to this day.”

If Martin Sharp’s opening words sound a bit…literary, that’s because they come from Nick Hornby’s 2005 novel A Long Way Down. Hornby wrote “High Fidelity” and “About a Boy,” so he’s had a fair bit of luck with his adaptations. His luck changes for the worse with “A Long Way Down” – a premise-trap of a movie that groups strong actors into clichéd roles and misses the mark on the novel’s well-received black comedy with off-putting nonchalance regarding the near-suicides at the center of the story.

Sharp (Pierce Brosnan), a famed TV host until a sex scandal with an underage girl tore down his career, makes his way up to the roof of the Toppers’ House in London on New Year’s Eve. Just as he’s gathering the courage (cowardice?) to jump, he’s interrupted. Maureen (Toni Collette), a fragile-looking middle-aged woman, edges onto the roof to ask if he’ll be done soon. They’re joined by J.J. (Aaron Paul) – an American punk-turned-pizza-delivery-boy – and then, very suddenly, by Jess (Imogen Poots) – a live wire mess of an 18-year-old girl. The four hash out their differences and decide to sign a pact to kill themselves instead in six weeks, on Valentine’s Day.

Why? Beats the hell out of me, this isn’t really a film for logic. Remember when “The Breakfast Club” ended and you thought about what they’d do if they ran into each other the next day? “A Long Way Down” wears out its characters far before that kind of permanence is a remote possibility. How did John Hughes so unapologetically assemble archetypal characters to such great effect when it so badly hurts this film by director Pascal Chaumeil? It must be the emotional factor. There’s a lot of acting here, some of it’s good, but not much connects. Poots is strong as an over-the-top, anarchistic 18-year-old. She’s unabashedly sarcastic and a fiery presence amongst the other even-keeled performances. Brosnan plays Sharp as if James Bond didn’t make the cut with MI-6 and ended up instead a bid-headed TV personality. Aaron Paul has the most to gain from the film as the guy we’re still trying to figure out post-“Breaking Bad,” and he is the best in the film as the only one not clearly spelled out according to conventions.

Collette, who is revealed to have a disabled son that requires total commitment from her life, is the greatest disappointment of implementation. Collette is smart, but her character is dumb. Screenwriter Jack Thorne is looking at the four actors as a single unit rather than individuals, and forgets that while they add up to something complex, they are desperately empty when pulled out of the group. Maybe fans of the novel will have more luck with their additional investment into the characters. Without that extra layer of insight, this is a mostly hollow attempt at humanizing four main characters in just 96 minutes.

It’s just so damn deliberate. Nearly every shot is a tool to push forward the story, and while this may sound like economic storytelling, it simply leaves no time for the characters to simply live – to let them linger and really feel something. Chaumeil cuts to Maureen in one scene for 3 seconds – just long enough to show us one of her nervous twitches. That’s not life-on-screen, that’s a mechanical assemblage of shots designed to produce a response. In the opening scene, we meet J.J. up on the roof, preparing to commit suicide, and he’s brought his moped helmet and a couple pizzas up with him as if to knock on the screen and say, “see? I deliver pizzas!”

To further complicate matters, “A Long Way Down” happens to be a well-shot film. This is high style cinematography done well. Save for a single nighttime beach scene when DP Ben Davis (“Seven Psychopaths”) overdoes it with the blue “moonlight,” the majority of the film is smartly photographed and lit. Our four suicidal friends become better acquainted, deemed the “Toppers’ House Four” by the press who quickly learned of Sharp’s involvement on the roof, and decide to escape on a vacation together. At their tropical hotel, they cut loose for the first time in a long while and Davis brilliantly executes a long take that weaves through all four characters as they interact with other tourists and dance around. It’s a moment of pure flair that doesn’t mean much but looks so good – sort of like compiling four intriguing actors to carry out a story better kept to the pages of its source than brought to screen in such a forgettable fashion.

Taylor is a Chicago-based writer and aspiring film historian. He is the editor here at TFP, and has contributed to a number of international publications such as Cinema Scandinavia, PopMatters, and Room 101 Magazine. He can also be found listening to podcasts, researching topics he has little use for, or running after a city bus.
You might also like
Aaron PaulImogen Pootspierce brosnanRosamund Pike

END_OF_DOCUMENT_TOKEN_TO_BE_REPLACED
Taylor Sinople Picks: The 16 Best Films of 2016
Form and Function in Alex Ross Perry’s “Queen of Earth&...
Digging for Fire and Unexpected: Husband and Wife Process Parenthoo...
Every Thing Will Be Fine 3D Review