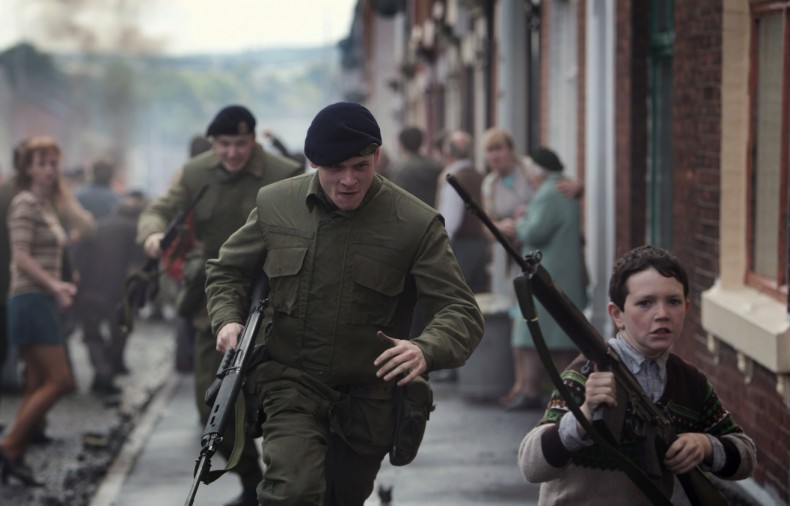 '71 is one of the more honest examinations of the IRA conflicts, but it’s also a somewhat tedious and predictable action thriller with almost no character development.

The ongoing conflict between the IRA (Irish Republican Army), the British Military Reaction Force, and other English factions has been an underrepresented and mostly ignored topic in English film and media. Films like The Crying Game and Steve McQueen’s Hunger are among the best examples, but the subject of the IRA is one that still hasn’t been explored as deeply as it should be.

‘71, the debut feature by French-born director Yann Demange, attempts to illustrate the rising tension between both factions by telling the story of a fictional British soldier named Gary Hook (Jack O’Connell) who spends the worst day of his life fighting his way out of Northern Ireland after being abandoned by the rest of his squad. Enduring pursuits by killers from two different factions, Gary relies on the goodwill of nearby civilians to help him find a path to safety.

Shot beautifully by DP Tat Radcliffe and directed at a fairly breakneck pace, director Yann Demarge’s debut feature is, for better and for worse, the product of a pure visualist. With a dreamlike sensibility reminiscent of both Paul Greengrass and Terrence Malick. Many of the film’s opening action sequences are breathtaking; in particular, one extended shot involving an accidental bomb explosion may rival the famous ending of Children of Men for the sheer magnitude of its vision.

However, ‘71 suffers from a weak script that does its characters and situations absolutely no favors. When the film doesn’t have its characters barreling through an apartment building or chasing each other at gunpoint, it has them spewing exposition-heavy dialogue, leaving no room for any development or subtlety. The film is constantly moving, but not in a way that implies any sort of destination. Additionally, Jack O’Connell is horribly underutilized and, after seeing his work in Starred Up, it’s apparent that this movie is a complete waste of his time.

Recently, the film has generated some distribution-related controversy, with a delayed US release and many citing that American audiences wouldn’t be able to grasp the concepts related to the IRA and the subtleties involved with those conflicts. Usually, I’d be the first to dispute this, but the content of ‘71 is extremely dense, and viewers hoping to comprehend any aspect of this film would be wise to brush up on some recent British history. Yet, as accurate as ‘71 may be – and unless the entire war played out exactly like a cliched action thriller, I don’t think it is – there’s not much intrigue to it on a narrative or personal level.

None of the characters are fleshed-out. Hell, none of them, O’Connell’s included, are even vaguely human. They’re all just placeholders for a specific faction in the conflict, and when their purpose has been served, they’re swiftly and efficiently “taken care of.” Viewers looking to see an exciting action film would be wise to watch something else; the action sequences are few and far between, and much of the violence is too hyper-realistic to be anything but a total bummer. Alternately, viewers looking for an accurate and entertaining depiction of the IRA conflict may also be searching in the wrong place, and would be wise to just watch a documentary on the subject instead.

Josef Rodriguez is a writer, filmmaker, and musician living in New York City. He is often labeled as "that guy who didn't love Boyhood" and he finds himself liking Harmony Korine films more than he likes his own friends. When he's not stressing over turning in reviews on time, Josef can be seen playing guitar, watching "Spring Breakers," or trying to write the next great American movie.
You might also like
Jack O’ConnellSean Harris

by Josef Rodriguez on August 21, 2014
Filled with gut-wrenching performances and not a hint of sentimentality, “Starred Up” is a raw, emotional journey into one of the UK’s most dangerous prisons.
Comments
Leave a reply
Add Comment Register

END_OF_DOCUMENT_TOKEN_TO_BE_REPLACED
Taylor Sinople Picks: The 16 Best Films of 2016
Form and Function in Alex Ross Perry’s “Queen of Earth&...
Digging for Fire and Unexpected: Husband and Wife Process Parenthoo...
Every Thing Will Be Fine 3D Review