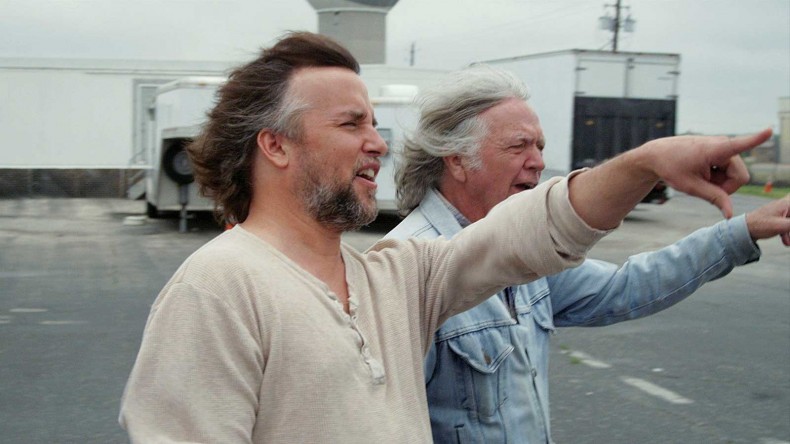 Although director Gabe Klinger has two of the most fascinating subjects one could dream of, “Double Play” is still not quite as good as a film with Richard Linklater and James Benning should be.

Whether or not most people realize it, Richard Linklater changed the future of independent cinema upon the release of his 1991 film “Slacker,” a brilliant yet distinctly youthful take on life during the closing years of the 20th century. Linklater went on to define the 90s several more times with 1993’s “Dazed and Confused”, 1995’s “Before Sunrise”, and 1996’s “SubUrbia” (which still hasn’t even seen a DVD release), with several more masterpieces making their way to the screen over the next two decades.

Even people who are familiar with Linklater’s work may not know that the auteur has had a long-lasting friendship with a director named James Benning, one that began shortly before Linklater began shooting “Slacker.” Benning, who is mostly an observationalist along the lines of Godfrey Reggio, has spent his career making naturalistic documentaries that rarely feature any speaking or human element, greatly in contrast to Linklater’s mostly dialogue-driven work. “Double Play,” a documentary by first-time filmmaker Gabe Klinger, is an extended conversation between the two filmmakers that takes place over the course of one day. During their time together, they discuss each other’s works and the direction of film as art, among other things, while attending Austin Film Society meetings, playing baseball, and overseeing the edit on Linklater’s most recent film, “Boyhood.”

At only 70 minutes long, “Double Play” is a simply told and simply edited film, one that uses archival footage from films of both Linklater and Benning to show how each of their projects reflects a certain notion they held at one point in their lifetime. One particular scene, in which Linklater discusses his potential as a baseball star, really contextualizes the only film that seemed truly out of place in his filmography, 2005’s “Bad News Bears,” a remake of a 1976 comedy with the same name. Linklater, who has always been a champion of original ideas, briefly discusses the impact that baseball had on his life, and it’s much easier now to see why he would have wanted to helm that project.

However, Klinger’s film is not able to maintain this level of insight for its relatively brief runtime, and much of the film’s first half isn’t able to capture the casual brilliance that its two subjects exhibit later on. Instead, both Benning and Linklater seem uncomfortable in front of the camera. Their conversations feel scripted, and it isn’t until roughly the film’s halfway point that the two directors begin ignoring the camera and engaging in a discourse that’s both extremely insightful and entertaining. During the film’s final minutes, in which Benning and Linklater are shadowing editor Sandra Adair as she works on “Boyhood,” there’s such a candidness about the conversation that one can’t help but feel like “Double Play” would have been a much better film had it started there.

What “Double Play” does capture is the eternally youthful spirits of both Richard Linklater and James Benning. Decades after their first meeting, both men still have a passion for filmmaking that only intensifies with age, and Klinger effectively conveys that the unlikely friendship has had an impact on both of their careers in ways that seem to have gone unspoken. Unfortunately, the things that are said in Klinger’s film are not always enough.

Josef Rodriguez is a writer, filmmaker, and musician living in New York City. He is often labeled as "that guy who didn't love Boyhood" and he finds himself liking Harmony Korine films more than he likes his own friends. When he's not stressing over turning in reviews on time, Josef can be seen playing guitar, watching "Spring Breakers," or trying to write the next great American movie.
You might also like
James Benningrichard linklater

by Josef Rodriguez on January 12, 2015
Despite the inspired casting of legendary filmmaker James Benning, Jon Jost’s Coming to Terms is a baffling misfire on every conceivable level, resulting in not only the year’s worst film, but one of the worst film’s in recent memory.
comments
Leave a reply
Add Comment Register