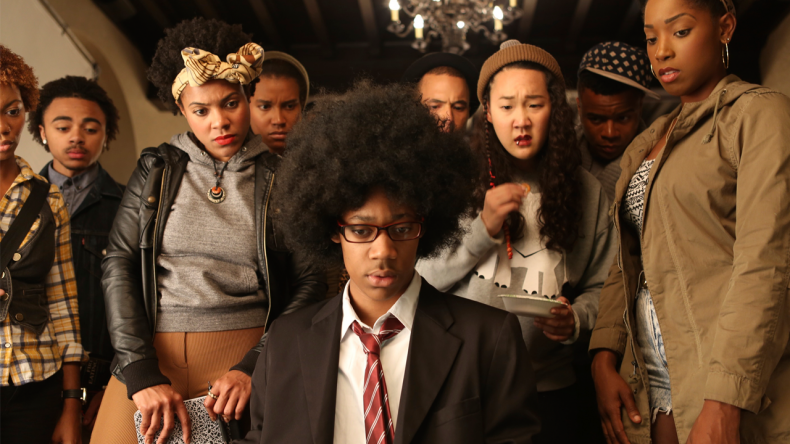 “Dear White People” is the racial satire Hollywood has been waiting for, even if its opinions on racial tension are often better than the movie itself.

Somewhere between Spike Lee’s “School Daze” and Fox News’ worst nightmare lives “Dear White People,” from first-time filmmaker Justin Simien. Samantha White (Tessa Thompson) MC’s a college radio show called Dear White People, in which she blatantly calls out her caucasian peers and points out the tendency, whether accidental or not, to participate in racist behavior in a “post-racial” society.

Her show has attracted the attention of many other students and most of the administration, and a campus paper, in search of a black perspective, recruits Lionel (Tyler James Williams), a gay black writer with a massive afro and a laundry list of interpersonal conflicts at his campus housing involving the house head, Kurt (Kyle Gallner) – who happens to be the School President’s son – and his prestigious comedy troupe.

Meanwhile, a video blogger on campus, Coco (Teyonah Perris), is forced to up her show’s ante when a reality show producer (Malcolm Barrett) comes to campus looking for a camera-ready personality to put on television. This drives Coco to team up with Kurt for his house’s annual Halloween party which, as seen in the film’s prologue, sparked a campus race riot due to racial imagery and its “hip-hop theme.”

“Dear White People” is the Obama-age racial satire Hollywood has been needing, and it’s the most funny, fearless, and original dissection of racial tension since “Do the Right Thing.” Justin Simien has a knack for fast-paced dialogue, where he is able to cram in an impressive number of perspectives. The key, though, is that each and every one of these opinions hinges on a valid truth, and the answers Simien brings to the table about 21st century race relations are not conclusive by any means.

The lead performances by Tessa Thompson, Kyle Gallner, Tyler James Williams, and Teyonah Perris are all fantastic. Thompson and Gallner rise above the rest with candid portrayals of two students at two opposite ends of the racial, financial, and cultural spectrum. The few moment where they share the screen are among the most tense in the film, and one wishes their scenes together could have been more substantial. Perris also turns in a supremely impressive performance as a young woman in one of life’s transitional periods, where we must choose who we are and who we’ll become.

And that’s really the crux of Simien’s film. As much as it is about race relations, “Dear White People” touches heavily upon the idea of an ever-changing identity, one characterized as much by self as by environment. Each student character is, at some point, faced with a decision that will ultimately change the course of their entire life, and Simien handles these moments with sensitivity and skill. As much as he may not agree with some of his characters, he understands that, and that comes through both in the writing and in the final product, which never resorts to cheap shots or unrealistic portrayals of very real issues and personalities.

However, there are times in the film when the characters talk and feel more like vices for the director’s opinions and frustrations about modern black culture. At a certain point, the monologuing about Tyler Perry or the inherent racism in university culture becomes repetitive. The characters are also, outside of their opinions, not particularly interesting, and “Dear White People” often feels like a thesis paper that’s been adapted for the screen. The interpersonal conflicts involving romance and college life are rudimentary, and the film’s only real source of originality comes from its audacious perspective on race and identity. Thankfully, this aspect of the film is so intrinsic to its narrative, that the fresh perspective and originally that is present never becomes muted.

There are no doubts that people will be ripping quotes and scenes from “Dear White People” for the next couple of eternities, and rightfully so. Simien’s film says more about race than the last 10 Spike Lee movies combined. But it’s still hampered by a reliance on first-time filmmaker contrivances, some unnecessary focus on romantic subplots, and sloppy editing that leaves the film bloated at 108 minutes. Regardless of that, “Dear White People” is necessary cinema. Like its silver-tongued protagonist, it demands to be heard.

Josef Rodriguez is a writer, filmmaker, and musician living in New York City. He is often labeled as "that guy who didn't love Boyhood" and he finds himself liking Harmony Korine films more than he likes his own friends. When he's not stressing over turning in reviews on time, Josef can be seen playing guitar, watching "Spring Breakers," or trying to write the next great American movie.
You might also like
Dennis HaysbertKyle GallnerTessa Thompson

by Williamson Balliet on August 21, 2014
While watching “Sin City: A Dame to Kill For” it struck me that directors Robert Rodriguez and Frank Miller (again credited as co-directors) are completely unaware of the law of diminishing returns. There is a certain point in which adding more to a factor of a production will result in a decreased yield. In this […]
comments
Leave a reply
Add Comment Register

END_OF_DOCUMENT_TOKEN_TO_BE_REPLACED
Taylor Sinople Picks: The 16 Best Films of 2016
Form and Function in Alex Ross Perry’s “Queen of Earth&...
Digging for Fire and Unexpected: Husband and Wife Process Parenthoo...
Every Thing Will Be Fine 3D Review