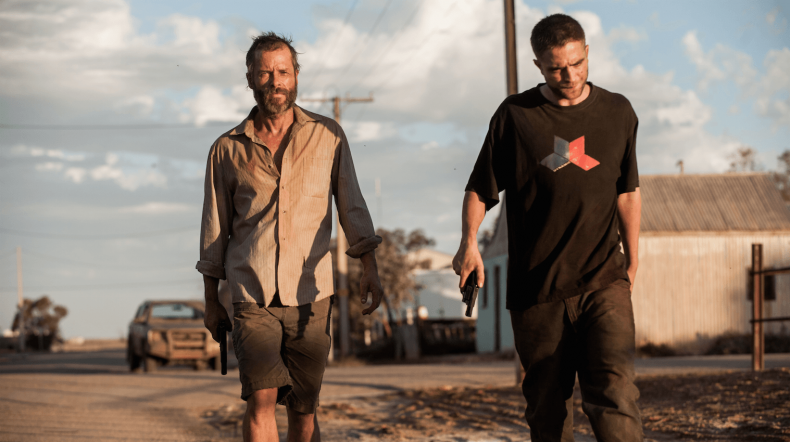 Brutal and immersive, "The Rover" is an exemplary entry into post-apocalyptic fiction that values its characters and mood over plot and action.

Dystopian post-apocalyptia has become the new playground for young adult fiction after the readership chewed up and spat out monster-romance. “The Rover” takes the genre back to the adults – back to real tragedy – for the first time since 2009’s “The Road.”

We learn the rules of this world in the tense opening sequence. Somewhere in the Australian outback, ten years after an event referred to only as “the collapse,” Eric (Guy Pearce), a weathered loner in a stained and dusty collared shirt and cargo shorts, chases after three men who have stolen his car. He drives behind the thieves along a road that stretches miles into either direction of the barren landscape before they wave guns out their window and he backs off – still trailing them, but from further back. Eventually, they stop and ask him what he wants. “…My car back,” he says. The three men hesitate despite their clear upper hand, locked in a standoff with a single, unarmed man.

“The Rover” is an accomplished piece of dystopian fiction because these men talk first, not shoot. These are not archetypal bandits from the sci-fi catalogue of characters – they are humans, caught in a complicated situation that they hope won’t end in taking another’s life. Writer-director David Michôd (“Animal Kingdom”) sets the film only ten years after the collapse. And it’s important that the characters lived in something like the world we know – it means that they still remember, that they haven’t lost all humanity, haven’t become a construct of their environment as the next generation of children will.

But like it or not, Eric has been cut loose from the limitations of a civilized society. A shocking burst of violence early in the film tells us that. After the standoff ends with the men getting away with Eric’s car, he continues to track them and comes across Rey (Robert Pattinson), the younger brother of one of the thieves. Slow-witted and injured from an earlier incident, Rey was left behind by his brother but knows where he’s going. Eric takes the boy under his wing, gets him medical attention from a wasteland doctor, and demands they drive immediately to his older brother.

Michôd shot “The Rover” in the outback, far away from the luxuries of catered meals and reasonable temperatures. These are actors working in 100+ degree heat, there’s no other option but for that passion and commitment to come through as a gritty determination in the characters – a struggle for survival deeper than the character being acted.

The “why” and “how” of the collapse are largely unimportant. We do pick up clues though, like the Chinese markings on train cars, the worthlessness of Australian currency in bartering, and the frequent mention of “the mines,” which many seem to have come from around the world to work in. These details add to the lore of the fiction, but don’t do much to help us understand Eric’s story. “What a silly thing to be worked up over, in this day and age,” a woman remarks at Eric’s determination to track down his car. The final importance of the car is a great separator of “The Rover” from its more action-heavy counterparts – it will divide audiences into those that will find these 102 minutes sticking with them, and those that will find it slight, and unsatisfying in contrast with the expectation of a colossal, 30-minute shootout. I was with the former group. There’s not much more I could think to ask of a post-apocalyptic drama, and “The Rover” is the first film in weeks that I’m ready to see again just days later.

It probably has to do with the fact that we see just one vignette, one instance of the types of interactions taking place in post-collapse Australia. There’s no end-of-the-world plot to contend with here, just a handful of seriously interesting characters clashing in the desert. Where a giant action film gives you the sense that you’re seeing the must-see story, and thus satisfying you by the end that the entire world of the film has been explored, “The Rover” allows your imagination to run away with the setting, to assume that there is more than we see.

The linear, simplistic approach to plot is underlined by the production – with a camera that lingers on the distant, mountain landscape, and a discordant score that’s really more a series of loud sounds (a loose string is pulled back and snapped onto the wood of the guitar, hard, every ten seconds or so in one sequence). Save for a repeated and style-driven shot that follows Eric from behind, every element of the production is bare-bone essential. The complexity lacking in the plot is found instead in the characters.

“Memento” was the last time we saw Pearce this worn and resolute, and Pattinson is unrecognizable, without a benchmark performance with which to compare. Pattinson, at the height of his career between this door-opening performance and his upcoming work in Cronenberg’s “Maps to the Stars,” portrays Rey with an innocence manifested through nervous ticks and a general lack of understanding in some situations. In a masterful scene, we find him listening to a pop song on the radio, singing the words to himself, and for a moment we can pretend that the world hasn’t caved in on itself.

Rey is who he is, but Eric’s moral compass is hidden. They make a hell of a dynamic pair. Eric has withdrawn into himself as a response to the collapse. He holds onto the humanizing personal details somewhere deep inside, and refuses even to reveal his name to others. There’s a relatable beauty to his character. A sense that in this dangerous world where justice and consequence are no longer functioning concepts and domesticity is only a story from another time, the only thing to do to cope – and to last – is to harden.

Taylor is a Chicago-based writer and aspiring film historian. He is the editor here at TFP, and has contributed to a number of international publications such as Cinema Scandinavia, PopMatters, and Room 101 Magazine. He can also be found listening to podcasts, researching topics he has little use for, or running after a city bus.
You might also like
David MichôdGuy PearceRobert PattinsonScoot McNairy

END_OF_DOCUMENT_TOKEN_TO_BE_REPLACED
Taylor Sinople Picks: The 16 Best Films of 2016
Form and Function in Alex Ross Perry’s “Queen of Earth&...
Digging for Fire and Unexpected: Husband and Wife Process Parenthoo...
Every Thing Will Be Fine 3D Review