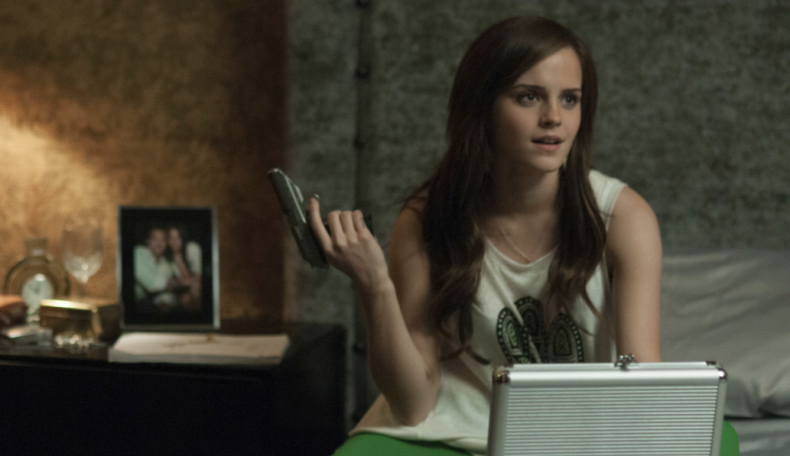 Despite the promise of the creative team, Sofia Coppola’s “The Bling Ring” is as shallow and annoying as its characters.

We see the world as they do: rows of palm trees passing overhead from inside a convertible Porsche, nightclubs pulsing to the beat of the music, designer jewelry and clothing, pop music and drugs. To the group of Californian teenaged friends, it’s just another day in the life of the rich, not yet famous. But what if everything isn’t as it seems? What if that designer jewelry, the clothing, even the sports car…is stolen?

Sofia Coppola’s “The Bling Ring” tracks the rise and fall of a crew of vapid high schoolers driven by an obsession with fame to burglarize the homes of celebrities as wealthy and socially significant as Paris Hilton, amassing a haul of over $3 million of stolen goods over the course of a year.

Based on the 2010 “Vanity Fair” article “The Suspects Wore Louboutins,” the real-life group of teenagers was deemed the “Bling Ring” after word of their robberies spread in the news. The two kids at the center of the ring are the kleptomaniacal Rebecca (Katie Chang) and the troubled Marc (Israel Broussard). They begin by casually “checking cars” for unlocked doors after a party, but before long they have the idea to break into houses.

Making it a project distinctly from the Sofia Coppola camp is the requisite fuzzy, filmic cinematography that isolates the characters into their own private world – a tactic that has been heralded in Coppola’s previous projects including “Lost in Translation.” Lacking in this new feature is the emotional subtext that was handled so delicately in her past films. In “The Bling Ring,” Coppola outright refuses to offer any analysis of the characters – it’s strictly a surface level presentation of the story.  And while the story is intriguing, the process of actually watching it unfold is grating.

Confidently acted by up-and-comers Katie Chang, Israel Broussard, and Claire Julien along with the more experienced Emma Watson and Leslie Mann, the performances are all believable. The problem is in the use – or misuse – of these characters.

Over the course of the 90-minute film, we are subjected to a near endless repetition of party and robbery sequences. Party, robbery, party, robbery. Rinse and repeat. Spread throughout is the completely annoying dialogue between these characters – portraits of the contemporary American teenager dangerously obsessed with vanity. The film is aware of how irritating the characters are, but that acknowledgement doesn’t make it any less annoying to have to actually watch.

The majority of the narrative has the audience inserted into the bubble of these teens’ world, but in one spectacular moment the camera breaks outside of the bubble to take on an objective viewpoint. It is a wide shot of the home of “The Hills” star Audrina Patrdige – targeted by Rebecca and Marc. Up until this point, the robbery scenes have taken us in the house with the Bling Ring as they explore, wide-eyed, the mansions of the famous and playfully rifle through their possessions – taking what they want. You’re almost able to forgive them on the basis of childhood troublemaking. In this moment, from this viewpoint, however, there is no party music, no smiling laughing faces. Only this single exterior shot of the home as we witness, through the windows, the duo break in, steal another’s possessions, and leave. Their actions reveal them for what they truly are, what they have become: criminals.

Moments thick with substance like this are all too lacking in the film – made all the worse by the fact that one or two actually do appear.

It goes without saying that much of the movie is spent waiting for the crew to get what is coming to them. As they continue to push the limits by taking more risks, it’s clear that they will eventually be caught. When it comes, it’s largely unsatisfying.

Fans of Sofia Coppola (many will see any film she makes, myself included) will likely be a little bit lost here. “The Bling Ring” requires a definite willingness from the audience to watch these characters in all of their idiotic, shallow glory that many simply will not be able to afford. It is an interesting story captured in the best way via the original written article, where you’re left only to imagine the character’s voices rather than be forced to hear them.

Taylor is a Chicago-based writer and aspiring film historian. He is the editor here at TFP, and has contributed to a number of international publications such as Cinema Scandinavia, PopMatters, and Room 101 Magazine. He can also be found listening to podcasts, researching topics he has little use for, or running after a city bus.
You might also like
emma watsonsofia coppolathe bling ring

by Taylor Sinople on June 16, 2013
The Earth opens up as everyone around you fall into pits of endless hellfire; others are lifted into the sky to the clouds and beyond by beams of angelic blue light, but you aren’t so lucky. You neither fall nor ascend, but your chances for survival are slim nonetheless. With the arrival of the apocalypse […]
comments
Leave a reply
Add Comment Register

END_OF_DOCUMENT_TOKEN_TO_BE_REPLACED
Taylor Sinople Picks: The 16 Best Films of 2016
Form and Function in Alex Ross Perry’s “Queen of Earth&...
Digging for Fire and Unexpected: Husband and Wife Process Parenthoo...
Every Thing Will Be Fine 3D Review