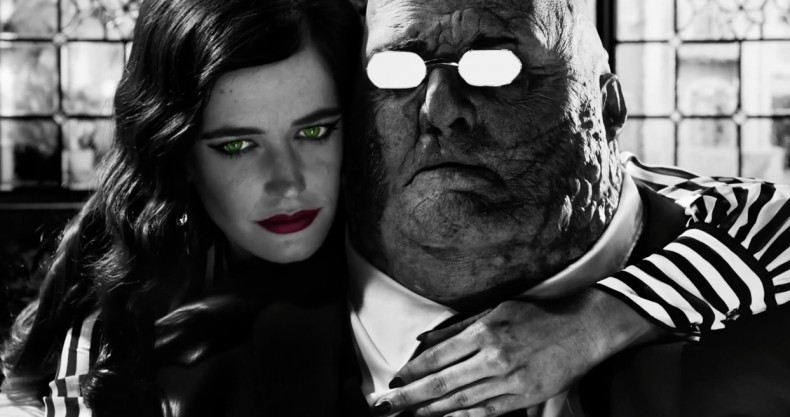 Overall Rating
2.5
2.5
Critic Rating
You have rated this

While watching “Sin City: A Dame to Kill For” it struck me that directors Robert Rodriguez and Frank Miller (again credited as co-directors) are completely unaware of the law of diminishing returns. There is a certain point in which adding more to a factor of a production will result in a decreased yield. In this case, the factors that were gratuitously added were nudity and violence. The result was the inevitable decrease in their yield, that is, any enjoyment I could have had watching this movie.

I place myself firmly in the camp that believes “Sin City” was a fantastic experience at the cinema. As such I will be writing about it quite a bit just to note how awry its sequel  went. It was wonderfully structured, generally enthralling , and emotionally impactful despite the hyperbolic stylistic choices. Even a few objectively bad performance found therein were not enough to remove me from the intensity and excitement of Frank Miller’s world. There is not a single other film like “Sin City” and, after seeing its sequel, this fact still remains.

“A Dame to Kill For” is structured in a similar vein to its predecessor, telling multiple stories within the confines of Basin City. But instead of attempting to rebuild the atmosphere of Frank Miller’s ultra-violent, neo-noir hellscape, we are thrust into the first narrative involving Marv (Mickey Rourke). I use the term ”narrative” incredibly loosely as this story has no purpose and holds no interest, forgotten almost as soon as the focus shifts. He awakens in a similar amnesiac state that afflicted him momentarily in the previous film, a pile of wreckage and bodies at his feet. He complains about his condition and not having taken his medication, then begins to stalk the survivors of his rampage. His mental disorder was an interesting aside  previously, leading to mistaken identity and threatening the completion of his revenge. Here, it is mentioned once and forgotten for the remainder of the film.

The burden of the film is placed on Marv, appearing in three out the four storylines. He is used in the film like one would use a cheat code in a video game, enlisted to aid other characters in their fights. To do this a single time is almost forgivable but twice comes off as supremely lazy screenwriting. He was a character once intriguing because of his austerity in addition to his other-worldly strength, likely the most fascinating of the first film, but loses his mystique entirely when thrust into the spotlight on multiple occasions.

The meat of the picture is in the remaining three plots. The first centers around, Johnny (Joseph Gordon-Levitt), a gambler who shows up in Sin City to take down Senator Roark (Powers Booth) in poker. This is the strongest of the film despite its lack of complexity, and is elevated in a large way by a brief appearance by Christopher Lloyd. Second is a story of Dwight McCarthy (Josh Brolin though previously played by Clive Owen), who attempts to aid his former love interest Ava Lord (Eva Green) in escaping her relationship with her husband. I am of the belief that the filmmakers were aware of how poorly this section was written and hedged their bets by removing the clothes of Ava Lord for half of her scenes. The saving grace of this section would be Christopher Meloni, playing an easily duped detective, who seems to know exactly what kind of movie he is in. The final turn of events concerns Nancy (Jessica Alba) seeking revenge on Senator Roark for leading her savior John Hartigan (Bruce Willis) to suicide in the film prior. There are just about zero redeeming qualities to this portion of the film. It is a disinteresting story where one must abandon common sense and the logic of storytelling entirely to be moderately enthralled. And its attempt at inspiring awe in its conclusion, and that of the film itself, can only be met with apathy. Or perhaps derisive laughter.

“A Dame to Kill For” maintains the visual stylization that succeeded in the original but now seeming more like dispassionate mimicry. For those unfamiliar with the palate of “Sin City,” it is largely black and white and reliant on lighting to achieve its magnified noir look, but with the occasional stark colorization of a person or piece of clothing. Attempting to recapture this look, the sequel’s aesthetics seem fraudulent in their pandering. The directors have only amplified what succeeded for them previously. “Sin City” worked phenomenally well as a stand-alone. It was largely the novelty of its appearance that endeared viewers and garnered such praise and focus. It parodies such established tropes of noir that its look is timeless, working as well today as it did in 2005. The sequel is not a poorly shot film by any stretch, but all the chiaroscuro and sweeping camera work in the world cannot save “A Dame to Kill For” from cannibalizing its source’s iconography. It also contains one very strange color choice that made me question the purpose of breaking from its monochromatic tendencies at all.

This film seems to be centered on the muddled perception of what fans would want to see in a sequel in terms of spectacle, but failing to comprehend the reason the original work resonated with so many people. This is also referred to as “George Lucas syndrome.” The problem is, acquiescing to these sorts of demands leads to repetitiveness, culminating in a soulless imitation. “You liked Marv? Well now he’s in every story!” “Oh, you like how Jessica Alba dances on a stage in a revealing outfit? Now she does that seven or eight times!” (Note: I lost count of how many times Jessica Alba dances on that stage, but those numbers are not inflated.) By the end of the film I was exhausted by insistence.

I’m simply not sure who this film is for. I was fourteen when “Sin City” first came into theaters and I saw it as a revelation. It was a vital time for a budding film-lover and would lead to the exploration of Robert Rodriguez’s filmography. From the youthful “El Mariachi,” where I began to consider how money may not matter when colliding with vision and motivation, to “From Dusk till Dawn,” where I saw actors and actresses removed entirely from their elements and a second act reveal that remains something to marvel at. So I look at “A Dame to Kill For” with only disillusion and consternation. That it would take nine years to create such a derivative film, filled to the brim with misogyny and excess heaped upon excess, is just disheartening. But were I am optimist I would say that this film serves as proof of how much thought went into its forebear, showing how wrong they could have gotten it in 2005.

by Chris P. on February 8, 2015
An ambitious mixture of hard-nosed topes and goofy animation makes Zemeckis' film unlike anything else, and it's absolutely splendid.
Comments
Leave a reply
Add Comment Register

END_OF_DOCUMENT_TOKEN_TO_BE_REPLACED
Taylor Sinople Picks: The 16 Best Films of 2016
Form and Function in Alex Ross Perry’s “Queen of Earth&...
Digging for Fire and Unexpected: Husband and Wife Process Parenthoo...
Every Thing Will Be Fine 3D Review