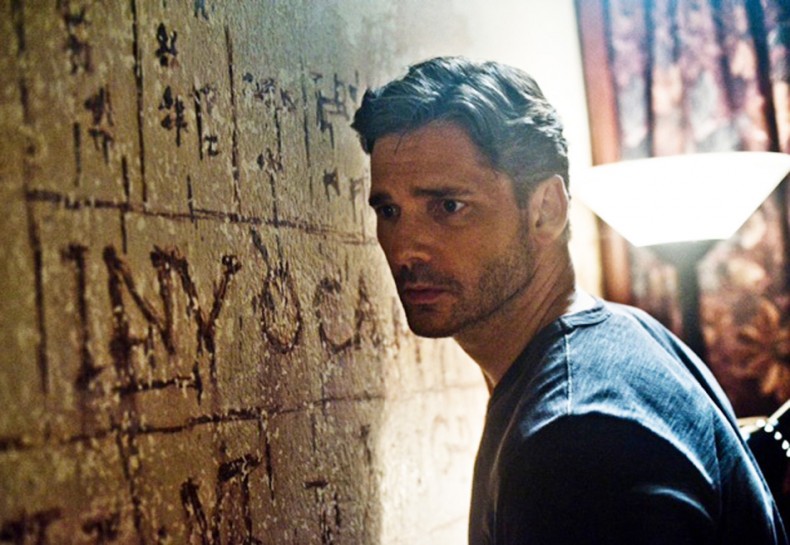 Scott Derrickson throws horror elements into a crime thriller and hits "blend" in "Deliver Us From Evil," a genre mash-up that works about as often as it doesn't.

Trailing just behind “good” and “long” in the list of go-to adjectives most audiences use to describe movies is the phrase “it just doesn’t know what it wants to be.” As someone interested in films that push boundaries, twist genres, and break way from the “stock movie ‘A’” mold, I often read that negative remark as an unintended compliment. So take it from me – a master at dismissing negatives as misunderstood positives – when I say with a shrug and a grimace that “Deliver Us from Evil” just doesn’t know what it wants to be, I mean it as a criticism.

Exorcism movie square one: someone finds a strange artifact and unknowingly unleashes an ancient evil. This time, it’s a group of soldiers in Iraq who bring the evil back to New York City after their tour of duty – as if “coping with demonic possession” is really something that needs to be added to the list of PTSD symptoms.

A few years later, solemn-faced NYC police sergeant Ralph Sarchie (Eric Bana) and his wisecracking partner (Joel McHale) are working the overnight patrol shift when they respond to a call for disturbing, violent behavior. A woman calmly threw her baby into a lion’s den and now sits at the zoo, unresponsive, muttering the same phrase under her breath over and over. It’s the start of an unexplainable series of crimes that Sarchie becomes obsessed with linking. But as the spirituality-resistant officer digs into the case and butts heads with a maverick priest specializing in the demonic (Édgar Ramírez), he begins to face an unthinkable, paranormal conclusion.

“Deliver Us from Evil” is Scott Derrickson’s (“Sinister,” “The Exorcism of Emily Rose”) most ambitious film yet. He reunites with his frequent co-writer Paul Harris Boardman in an attempt to transcend the horror genre by alternating suspenseful set pieces with legitimate crime drama. Together, the two have crafted an hourglass-shaped screenplay that begins and ends with broad, typical conventions but narrows in the middle for a strong passage of tight, genre-bending mystery.

The top of the hourglass, though, is rough. Derrickson takes a lot of time going through the frustrating motions of every supernatural horror film in which the protagonist refuses to believe certain events are paranormal . We see the evil is real, but Sarchie brushes it off. Repeat – upping the ante until he has no choice but to face the truth. It’s an inevitable back-and-forth that eats up a third of the film and needlessly delays the strongest drama — that of the character asking not “is this real?” but, “now that I know this is real, what do I do?” Watching this man alienate himself from his family and co-workers and go rogue to further investigate the case is a lot of fun, but to get to that point we have to wade through the opening sludge of conventional set-ups and cringe-worthy lines like when Sarchie approaches a vicious lion, quipping, “I hate cats.”

Nevertheless, “Deliver Us From Evil” takes us into some fresh territory. Notable set pieces include that trip into the Bronx zoo at night (a very creepy place when the lights are off and the crowds have gone home), and a house where light bulbs burn out instantly and even the holy candles won’t burn. The scariest moments come from POV, found footage style shots in which Sarchie’s flashlight is our only source of light as he casts it around a room and you wait for the jump.

Fans of crime dramas may stumble into this one and not know what to make of it. For every standout choice in horror mechanic, there are two severely over-worn ones. A decrepit basement, a child’s bedroom in the middle of the night, and a recurring jack-in-the-box bit all appear to play host to the relentless jump scares – a tactic low on the list of respected cinematic devices. These are settings and techniques that need to be retired from horror. They were once genuinely scary, but now act as some sort of ritualistic highlight reel of the scenes that “must” appear in every film in the genre.

While the set-ups aren’t innovative, several of the performances are. The effects of demonic possession are rendered in truly disturbing ways. Where a zombie movie may use rapid-cutting to build up suspense, Derrickson holds his camera. And, like the master of the genre, “The Exorcist,” his possessed character’s are scary well past their initial reveal, allowing for an indulgent 20-minute exorcism sequence that doesn’t lose much momentum.

McHale, the king of sarcasm from TV’s “The Soup” and “Community,” is the buddy-cop we never knew we needed. He plays the stilted part well enough, but a moment when Sarchie teases his character – saying, “you’re such a bad actor” – doesn’t go by without a certain degree of irony. Bana is more successful and responds well to the challenge of playing a hardened cop that has his barometer for what’s possible, and what’s right and wrong, stripped from him.

Contemporary horror seems to only have a shot at critical recognition if embracing the camp of the genre while still pulling off excellent scares. The 2013 re-make of “Evil Dead” and “Cabin in the Woods” come to mind. “Deliver Us From Evil” is at its worst when it dips into camp unintentionally. Everyone who read through the script in pre-production shares the blame for allowing “Deliver Us From Evil” to go to release with one of the dumbest narrative devices I’ve ever seen in a film. For some inexplicable reason, the demons use the music of The Doors as their anthem. Lyrics are spoken by the possessed and carved into walls. It’s unthinkable that somewhere along the line, Derrickson wasn’t told that finding loose relevance in a few Doors’ lyrics like “break on through to the other side” and “people are strange” is not enough motivation to write in an entire subplot that claims demons from hell that originate in the middle-east for some reason enjoy 1960’s American rock music to the point of using it as their calling card.

Blending horror with crime drama is a mashup no one asked for, but as a fan of movies you can’t help but be interested in the results. There are pieces of two good movies here, but they don’t cooperate well. “It just doesn’t know what it wants to be.” The gross-out horror gags and jump scares interrupt any stretch of believable mystery drama. There’s an overwhelming feeling that we’re watching a decent crime mystery that some production assistant somewhere accidentally collated with a horror script and no one ever noticed.
Continue Reading Issue #6

Taylor is a Chicago-based writer and aspiring film historian. He is the editor here at TFP, and has contributed to a number of international publications such as Cinema Scandinavia, PopMatters, and Room 101 Magazine. He can also be found listening to podcasts, researching topics he has little use for, or running after a city bus.
You might also like
Eric BanaJoel McHaleSean Harris

by Taylor Sinople on January 25, 2014
A 4-man Navy SEAL team is deployed in an Afghanistan mountainside to take down a known terrorist when they’re attacked by local Taliban forces. Outnumbered, backed against a cliff, and out of contact with command forces, the squad makes a desperate run for higher ground in a true story based on a memoir by Marcus […]

by Taylor Sinople on September 3, 2013
John Crowley’s political conspiracy thriller “Closed Circuit” opens on the tiled images of 15 security cameras capturing the intimate, everyday moments shared by strangers shopping in a London market. Our brief, intrusive access is shattered by a sudden truck bombing that kills more than a hundred people in the square. A suspect, Farroukh Erdogan (Denis […]
Comments
Leave a reply
Add Comment Register

END_OF_DOCUMENT_TOKEN_TO_BE_REPLACED
Taylor Sinople Picks: The 16 Best Films of 2016
Form and Function in Alex Ross Perry’s “Queen of Earth&...
Digging for Fire and Unexpected: Husband and Wife Process Parenthoo...
Every Thing Will Be Fine 3D Review