Reviews
3
1
previous article
The Best Films of 2013
next article
Review: The Great Beauty 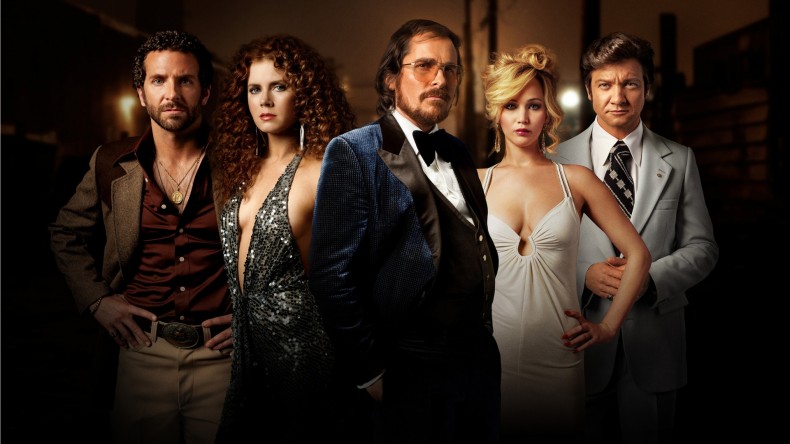 Straight from the 1970’s throwback studio logos for Columbia Pictures and Annapurna Pictures used at the head of the film, David O. Russell throws us into the bell-bottomed, shag-carpeted, leisure suited world of “American Hustle.”

The year is 1978 and con artists Irving Rosenfeld (Christian Bale) and Sydney Prosser (Amy Adams) are about to find themselves entangled in the infamous FBI sting operation ABSCAM. Irving and Sydney (his British partner and lover) took their lucrative phony-loan business too far when they unknowingly tried to scam FBI agent Richie DiMaso (Bradley Cooper). DiMaso offers them a way out – they work with the Feds to take down three major players in the New Jersey crime game and they’re free. At the top of the list is Carmine Polito (Jeremy Renner) – a politician with a determination to improve the city that knows no legal bounds. As DiMaso’s obsession with being the hero pushes the criminal/Fed trio deeper into the local crime syndicate, the line between “right” and “con” blurs in the midst of million dollar deals and meetings with the mafia.

Russell is a thoughtful enough director to see potential beyond creating another slick con action movie – instead, he gives us those satisfying criminal sequences while also finding time to really dig into how everyone engages in “emotional scams” to get what they want. Irving declares, “We’re all conning ourselves in one way or another just to get through life.” DiMaso becomes hellbent on the recognition and respect he stands to gain from taking down the Mayor. Sydney convinces herself she has to pretend to be someone she’s not in order to be happy. This is the biggest challenge of moral compass that any of these characters have ever faced – and they all nearly collapse because of it.

“American Hustle” is clearly larger in scope than any of David O. Russell’s previous films, and that’s a significant challenge considering the intimate, small-town scale is a big part of what was so great about his most recent films, “Silver Linings Playbook” and “The Fighter.” In “American Hustle,” the characters talk like they’re in a David O. Russell film, but the look and feel is pure Scorsese. This is both as good and as bad as it may sound. Russell is working with big genre, big music, and big stars and it all amounts to an extremely fun movie that sets loose its collection of eccentric and volatile characters for 2+ hours of entertainment. The performances (that include an overweight, balding version of Christian Bale and another iteration of Bradley Cooper in the throes of mania) are each hilarious, interesting, and unpredictable, but the story is what suffers.

“American Hustle” is stuffed with plot developments and we’re left with little chance to understand how they relate and work together before we head in an entirely different direction. It’s just sloppy storytelling. As a biographical account of ABSCAM, “American Hustle” doesn’t deliver – but it isn’t really about that anyways, the biographical context is just a place-setting to explore the comedy and style of the era. What we do get is a project with great writing and acting on a scene-to-scene basis, but with a lacking sense of cohesiveness.

We’re being pulled from both arms. For every good mark, there is a countering drawback. An exciting unbilled cameo is lost in a muddled plot. The quick-moving “re-cap” montage bringing us up to speed with the characters’ pasts is interrupted by a flashback that bizarrely lifts a gag directly from Chaplin’s 1921 comedy “The Kid.” Amy Adams is pitted against a collection of some of the best working American actors and stands her ground, only to again and again become the subject of exploitative shots fixated on her sex appeal.

In a lengthy dinner scene, Rosalyn (Jennifer Lawrence), Irving’s young wife, shares her infatuation with the smell of her nail polish. Sweet, but rotten, she describes it.

(All Reviews), Crime, Drama, Reviews
About the Author
Taylor Sinople

END_OF_DOCUMENT_TOKEN_TO_BE_REPLACED
Taylor Sinople Picks: The 16 Best Films of 2016
Form and Function in Alex Ross Perry’s “Queen of Earth&...
Digging for Fire and Unexpected: Husband and Wife Process Parenthoo...
Every Thing Will Be Fine 3D Review