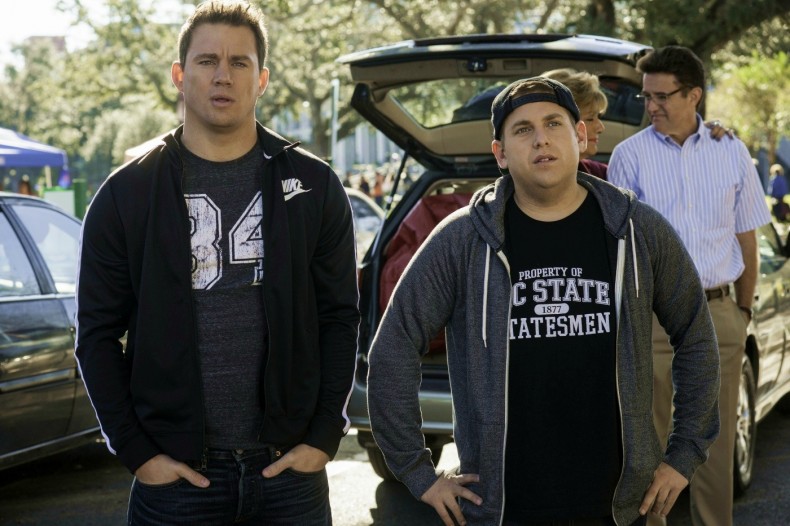 Although “22 Jump Street” sometimes feels like jokes in search of a movie, the self-aware humor and chemistry between its two leads keep the film from going off the rails.

With many recent comedy sequels faring the way they have, it was a surprise to hear that directing duo Phil Lord and Chris Miller would be helming the follow-up to “21 Jump Street” which was, against all expectations, one of 2012’s best films. Seeing that Lord and Miller passed on directing sequels to their two animated films (“Cloudy with a Chance of Meatballs” and this year’s “The LEGO Movie”), tackling “22 Jump Street” seemed to be an odd direction for the two, who are known for their refusal to adhere to formula.

The success of the Jump Street program has landed officers Schmidt (Jonah Hill) and Jenko (Channing Tatum) the chance to hunt down a narcotics dealer in a local college: an online college. Schmidt and Jenko aren’t exactly doing the high-risk work they had become accustomed to, and after a run-in with a drug lord known as The Ghost (Peter Stormare) leaves them empty-handed, they’re re-assigned to the Jump Street program under the supervision of Captain Dickson (Ice Cube), who has been moved across the street to 22 Jump Street, where yet another abandoned church has been repurposed as an undercover headquarters.

Equipped with a host of fancy new gadgets, Schmidt and Jenko are assigned to infiltrate a university where a drug known as WHYFY (pronounced Wi-Fi) has been spreading around campus, leaving one of its users dead. With the same identities, the duo are given their own dorm and told to, once again, infiltrate the dealer and find the supplier. That becomes difficult in a college setting, where all the students are much more aware, much more cynical, and much less willing to divulge information about where to find the drug. Meanwhile, Jenko gets close with the school’s star quarterback, a lunkhead named Zook (Wyatt Russell) who may or may not be the dealer they’re looking for, and discovers a natural ability for football. Schmidt, on the other hand, is having a tough time fitting in and feels left out of the investigation. The two are beginning to drift apart and are forced to consider the fact that maybe the success they had with Jump Street was only supposed to be a one-time thing.

Phil Lord and Chris Miller’s fourth feature is, like the three that came before it, a film that isn’t supposed to be as good as it is. Comedy sequels are almost never as satisfying as their predecessors, and are often met with diminishing returns both critically and commercially. “22 Jump Street” isn’t quite the exception to the rule, but it is a step in the right direction. Aesthetically and narratively, “22 Jump Street” is a superior film to the original. The chemistry between Hill and Tatum is even more refined, the script is loaded with an endless stream of self-aware jokes that run the risk of completely demolishing the fourth wall, and the cinematography by Barry Peterson is a massive improvement on the first film. If “22 Jump Street” isn’t quite as funny as its predecessor, it is a smarter and better made film, one that continues to benefit from the relaxed but dependable chemistry of its two leads.

Like this year’s “Neighbors,” “22 Jump Street” enlists the help of comedy’s most unique new voices, including an extended cameo from the brilliant Lucas Bros, who are currently showrunners for their own animated program on Fox. Craig Roberts also shows up for a couple of minutes as one of the college’s “art kids,” and Jillian Bell, who some may recognize from Comedy Central’s “Workaholics,” gives the film’s most rewarding performance as Mercedes, Maya’s snarky and seemingly omniscient roommate. Bell and The Lucas Bros are a complete revelation and threaten to steal the film from its two stars, but Lord and Miller have the wherewithal to not let the characters outstay their welcome.

Michael Bacall, who returned to write the film’s script, is something of a comedic godsend. Having written some of the best action-comedies of the past five years, his work here remains consistently entertaining and engaging without defaulting on one side of the hyphen. It was reported that, because of their obligations to “The LEGO Movie,” Lord and Miller weren’t given time to do any script revisions. Thankfully, they didn’t have to, because Bacall knows exactly what to do and how to deliver most of the goods that were promised at the end of the first film.

Like the first film, “22 Jump Street” is robbed of greatness by its poor editing, this time from the duo behind 2010’s “You Again,” Keith Brachmann and David Rennie. At almost two hours, the film is easily fifteen minutes too long, and the final edit seems almost determined to clear the film of any discernible depth, optioning instead to quickly get on to the next gag or punchline. The central romance between Schmidt and a student named Maya (Amber Stevens) is handled even more poorly than the one between him and Molly (Brie Larson) from the first film, who isn’t even mentioned in the sequel. Scenes that seem set-up to reveal something about the characters, most notably a poorly placed montage where Schmidt and Maya just sit up talking all night, are instead used as ways to slip in yet another unnecessary gag. The “Jump Street” films are already very intelligent and entertaining movies to watch, but I couldn’t help but feel like directors Lord and Miller were constantly trying to one-up themselves, with mixed results.

The duo behind the “Jump Street” films are undoubtedly two of the most talented directors in Hollywood, and have the potential to establish themselves as this generation’s Coen Brothers. However, even their best work, which was probably this year’s “The LEGO Movie,” has never reached the level of greatness that it deserves to. Their films are smart, hilarious, and surprisingly thoughtful pieces of work, but the humor often relies too heavily on the surprise of hearing the joke for the first time, which poses a problem when discussing the durability of their films in the comedy pantheon.

What separates something like “21 Jump Street” from recent classics like “Anchorman” or “Swingers” is that, while the three films share certain elements, I don’t know that “21 Jump Street” can ever really be as enduring as those films. We don’t watch “Anchorman” expecting different jokes, we watch it because it’s the illegitimate love child of a series of well-crafted jokes, and watching Dawson-era “Family Feud” on acid. It’s such a joy to watch the 10th, 15th, 20th time you see it that it’s become one of the most enduring pop culture symbols of the 21st century.

Lord and Miller, however, have just not made that film yet. Can they eventually? I have no doubts they will, but their increasing focus on drowning their films in irony has resulted in an insincere relationship with the audience that will eventually get old. “22 Jump Street” is a very good comedy film, one that made me laugh a lot, but it’s missing some of the heart and indulgence in candor that brings depth to the greatest films of the genre. Jonah Hill and Channing Tatum have some of the best comedic chemistry ever put on the screen, and it’s a shame that their natural abilities are often second tier to the film’s incessant winks to the audience. If there ever is a “23 Jump Street,” or even a “29 Jump Street” according to the ending credits, Lord and Miller should consider making it a less calculating film; instead, take a tip from Schmidt and Jenko and allow the friction to create a fire of its own.

Josef Rodriguez is a writer, filmmaker, and musician living in New York City. He is often labeled as "that guy who didn't love Boyhood" and he finds himself liking Harmony Korine films more than he likes his own friends. When he's not stressing over turning in reviews on time, Josef can be seen playing guitar, watching "Spring Breakers," or trying to write the next great American movie.
You might also like
Channing TatumChris Millerjonah hillPhil Lord

END_OF_DOCUMENT_TOKEN_TO_BE_REPLACED
Taylor Sinople Picks: The 16 Best Films of 2016
Form and Function in Alex Ross Perry’s “Queen of Earth&...
Digging for Fire and Unexpected: Husband and Wife Process Parenthoo...
Every Thing Will Be Fine 3D Review