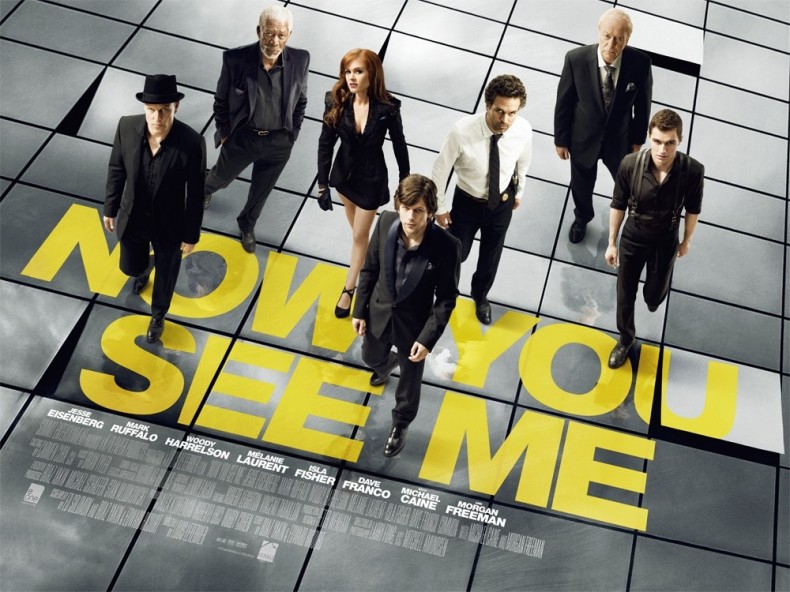 Overall Rating
3.0
3.0
Critic Rating
You have rated this

Movies and magic aren’t so different. Whether it’s watching a film or enjoying a magic act, there exists an important ratio of give-and-take between the audience and the magician or filmmaker. The performer or filmmaker takes from the audience a certain suspension of disbelief, and in return produces a worthwhile and compelling experience. If the take is more than the give, you end up with a poor movie, or a cheap trick. Heist-thriller “Now You See Me” is both.

Jessie Eisenberg, Woody Harrelson, Isla Fisher, and Dave Franco play four entertainers: a successful magician, a mentalist, an escape artist, and a pickpocket. Together, they are invited by a mysterious, unknown party to form the touring magic super-group The Four Horsemen. For their first performance, they magically teleport a randomly selected audience member to a bank vault on the other side of the world – allowing him to take back all the money with him. Millions of euros rain down on the audience. It is, of course, only an illusion – but the money, the robbery, is real. Assigned to investigate the performers’ impossible crime is FBI agent Rhodes (Mark Ruffalo) and Interpol agent Alma Vargas (Melanie Laurent). Together, they interrogate the magicians and begin to unravel a web of illusion-fueled heists that seem to point towards an ulterior motive and a larger target.

Intriguing, right? On paper this was clearly a desirable product, but with the addition of blockbuster action director Louis Leterrier (“The Transporter”, “The Incredible Hulk”, “Clash of the Titans”), the resulting film is an unimpressive exercise of CGI, hollow, arch-typed characters, and dreadful plot twists. It’s a cheap, dime-store trick.

Of a cast featuring both new actors and veterans, the talent power is anything but lacking in this film. With heavy hitters Michael Caine and Morgan Freeman backing up newer kids Jesse Eisenberg and Dave Franco, the performances aren’t all that bad. It’s the connection (or complete lack of) to the characters they are playing that make for a rough experience. At an overly long, near two-hour runtime, it is of vital importance that an audience can easily care about and invest in the characters on screen. With actors that have al proven their ability to portray compelling characters, it is disappointing that “Now You See Me,” offers a screenplay with nothing new to the genre in characterization. Each of the magicians is indistinguishable from one another outside of their painfully thin bit parts. It’s a challenge to even recall a single character’s name.

Surprisingly, the best piece of the puzzle turns out to be the always-amusing Woody Harrelson as he assigns his typical sarcastic, drunken demeanor to a mentalist able to acutely read others and manipulate them. Filling out the plot are a number of “Ocean’s 11”-inspired heist sequences in which events come together in what is meant to be a mysterious and thrilling way. These montages instead read as a checklist from the back of the “how-to” book on the modern heist thriller – traditional orchestral action score, multi-location crosscutting, out of place chase sequences and other excessive splatters of budget. These types of films can be really fun, but this one just isn’t.

What’s missing is the section of the list that can be the least expensive and the most challenging: the vitalizing heart of a captivating performance, or the comforting sheen of an original, worthwhile story. The magic act sequences take implausibility to a new level as the film attempts to suggest literally impossible magic tricks to be plausible in the real world. Sure, not everything needs to be plausible – especially with brainless eye candy set pieces like this – yet, the film doesn’t provide any layer of cinematic magic in which to let that implausibility become genuine entertainment. The trouble is, people are used to seeing “magic” in some sense every time they see a movie. Cinema in itself is nothing but a series of increasingly elaborate magic tricks. To make a successful film about magic, it requires not solely CGI tricks that an audience can dismiss with a wave of “Well, they can do anything with green screens these days” – but a well-crafted narrative that brings the magic of illusion and the magic of cinema together in cooperation by way of Christopher Nolan’s “The Prestige”.

Recent summer action blockbusters have shown that legitimate dramatic merit truly can come from something as excessive as a superhero story. “Now You See Me” is an action-thriller that squanders dramatic potential in exchange for an impressive ensemble cast that serves only to remind you of films you liked more, and a “gotcha” twist that will delight not because of its cleverness, but because it signifies the film will soon be over.

Taylor is a Chicago-based writer and aspiring film historian. He is the editor here at TFP, and has contributed to a number of international publications such as Cinema Scandinavia, PopMatters, and Room 101 Magazine. He can also be found listening to podcasts, researching topics he has little use for, or running after a city bus.
You might also like
Dave Francomark ruffaloWoody Harrelson

by Josef Rodriguez on March 15, 2015
Ken Scott’s second collaboration with Vince Vaughn, Unfinished Business, is suitably funny and well-performed, even if it sometimes can’t help but barely feel like an actual movie.

by Taylor Sinople on February 4, 2014
An unexceptional construction worker mini-figure (or “Lego guy”) named Emmet (Chris Pratt) lives day-to-day, decision-to-decision following the instructions that inform everyone in the Lego universe on how to live and behave. He buys his $37 coffee, he goes to work, he builds skyscrapers only to tear them down again, and he’s REALLY happy about it. […]
comments
Leave a reply
Add Comment Register

END_OF_DOCUMENT_TOKEN_TO_BE_REPLACED
Taylor Sinople Picks: The 16 Best Films of 2016
Form and Function in Alex Ross Perry’s “Queen of Earth&...
Digging for Fire and Unexpected: Husband and Wife Process Parenthoo...
Every Thing Will Be Fine 3D Review