Reviews
0
previous article
10 Reasons Why “The Fault In Our Stars” is the Best Book Adaptation of the Year
next article
Review: Let's Be Cops 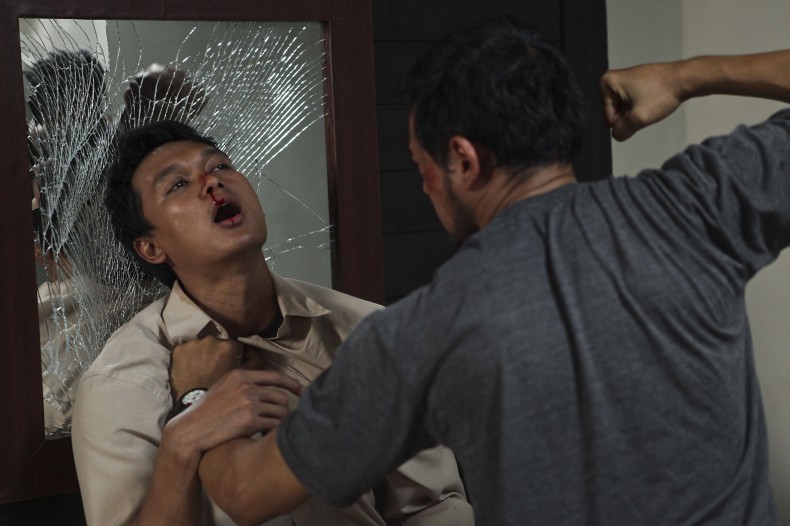 Killers is too stylish and thought-provoking to ignore, but it’s tonally inconsistent and, by the standards of other East Asian horror films, a little stale.

The Indonesian film market has been given some great exposure in Western culture by Gareth Evans and his Merantau Films, the production company responsible for both films in the “Raid” series and, now, The Mo Brothers’ “Killers,” an off-beat serial killer production starring two of Eastern Asia’s biggest stars. The film tells the story of two men in Japan and Indonesia. One, Nomura (Kazuki Kitamura), is a methodical serial killer who posts his grisly exports on a privatized video hosting site. The other, Bayu (Oka Antara), is a disgraced Indonesian journalist who watches Nomura’s videos compulsively, obsessing over their creator.

One night, while riding home in a taxi, Bayu is mugged by the driver and his accomplice, a heavyset man wielding a gun to Bayu’s head. In a split-second decision, Bayu decides to retaliate, forcing the gun from his attacker’s hand and killing both men in the cab. The next morning, he vaguely remembers the events transpired but sees evidence of the previous night on Nomura’s site. Apparently, when he arrived home, Bayu uploaded the footage to his computer and edited it before posting a short film on the site for Nomura to see. When he does, the two men begin a correspondence that will permanently alter the course of their lives.

Meanwhile, both men experience domestic issues that become the fuel for their killings. Nomura meets a flower shop attendant named Hisae (Rin Takanashi), a bright-faced young girl who takes care of her younger brother. He suffers from autism, and Nomura recalls a time in his past when he diligently cared for his sister. The two bond over their similar lives, and Nomura’s feelings become conflicted when his desire for connection and his desire for blood are indecipherably similar.

Bayu, on the other hand, pines for reconciliation with his wife, Dina (Luna Maya), and the love of his young daughter. Consumed by his work and exacting revenge on the man who ruined his career, an Indonesian socialite named Dharma (Ray Sahetapy), Bayu’s scattered thoughts and ever-growing sense of helplessness leads him to take matters into his own hands, and murder Dharma, his family, and his associates, posting all the videos online for Nomura and the rest of the world to see.

Timo Tjahjanto, one half of The Mo Brothers, is a director known for his contributions to “The ABC’s of Death” and “V/H/S 2,” where he, in both cases, directed excellent short films that saved two anthology films from becoming useless additions to an already played-out subgenre. Tjahjanto and Kimo Stamboel, his collaborator, are true stylists, and many of the most basic pleasures of “Killers” come from the excellent utilization of cinematography and sound to create a truly unsettling and dreamlike quality. The use of color is one of the most unique that any moviegoer is bound to see this year, and the basic differences in aestheticism between the Tokyo and Jakarta scenes are sometimes the best thing on-screen.

The script, which was penned by Tjahjanto alongside Takuji Ushiyama, is a mish-mash of potent social commentary, unspeakable brutality, and thriller cliches that often create an exciting and refreshing take on the serial killer genre. Other times, however, the mediocrity of both the storytelling and the pacing are a massive detriment, as the film relies heavily on its character development, and not incessantly grotesque violence, to progress comfortably.

“Killers’” insistence on justifying its characters’ behavior is both a possible source of intrigue as well as a cause for dismissal. At 137 minutes, the runtime should have been defended by the surprisingly lofty material, which touches upon, among many things, the global attitude towards violence in the digital age. Where “Killers” doesn’t quite succeed is in the execution of these ideologies; no one watching this film is going to mistake it for high art, which is very much the point. “Killers” is a film that exists to provoke thought, that’s a given. But it’s also one that yearns to nauseate its audience and shove violence down their throat with no regard for their tolerance. Reports of people walking out of this film in disgust are probably the kinds of reviews a film like this would be honored by.

Yet, I never felt that “Killers” committed to its darkly comic attitude the way it should have, which results in an unbearable amount of tonal inconsistency. In one scene, the audience is asked to be revolted by Nomura’s unforgiving barbarism, but in the next, when he is punching a prostitute into submission, it’s played for laughs. “Killers” could have been a much better film had it stayed with the black comedy that is responsible for many of its best scenes, but the script’s refusal to be as ruthless as it thinks it is becomes a problem when the audience is then expected to feel a shred of sympathy for Nomura, who is given an unnecessary backstory that cheapens the character.

There’s nothing about him that, as a sympathetic figure, hasn’t been done in other Asian horror films to greater success. The most fascinating aspects of his character aren’t necessarily how he became the psychopath we see on-screen. Watching him methodically clean his house after a kill, seeing him edit his snuff films after the body has been disposed of: these are the things that make “Killers” worth watching. And perhaps the film could have been even better if it had stuck with its original plot, one involving two notorious serial killers who battle for the title of World’s Best Murderer. There are many times that “Killers” obviously wants to be that film, but it just doesn’t let itself go there, and the message is ultimately diluted as a result.

Oka Antara, who stole every one of his scenes in “The Raid 2,” is maddeningly inconsistent here as Bayu, in a bizarre performance that flips the switch from wonderfully restrained to insufferably hammy whenever the character is required to perform a murder. His facial expressions and body language after the initial taxi murder are laughable at best, and not in a way that is agreeable with the comedic tone of the film. From there, it doesn’t get much better. However, the great shame of his performance is that the scenery chewing that goes on during the action in no way resembles the potency of scenes involving the character’s wife or daughter, or the methodical ways he examines his surroundings before committing the actual killing.

Perhaps it’s what The Mo Brothers wanted, but Antara’s performance is unlike anything else in the Indonesian actor’s filmography. Nevertheless, his foray into leading man status is not entirely wasted. In fact, Antara’s performance is representative of the entire film: inconsistent but fascinating. “Killers” earns points for its compulsive watchability, and I have no doubt that I’ll revisit it from time to time. There’s no denying that it’s the weakest of Merentau’s output, and it can’t shine the shoes of other Asian serial killer films (the masterful “I Saw the Devil” comes to mind) but “Killers,” like the videos directed by its two characters, is not a film to be ignored.

Josef Rodriguez is a writer, filmmaker, and musician living in New York City. He is often labeled as "that guy who didn't love Boyhood" and he finds himself liking Harmony Korine films more than he likes his own friends. When he's not stressing over turning in reviews on time, Josef can be seen playing guitar, watching "Spring Breakers," or trying to write the next great American movie.
You might also like
rin takanashi

END_OF_DOCUMENT_TOKEN_TO_BE_REPLACED
Taylor Sinople Picks: The 16 Best Films of 2016
Form and Function in Alex Ross Perry’s “Queen of Earth&...
Digging for Fire and Unexpected: Husband and Wife Process Parenthoo...
Every Thing Will Be Fine 3D Review