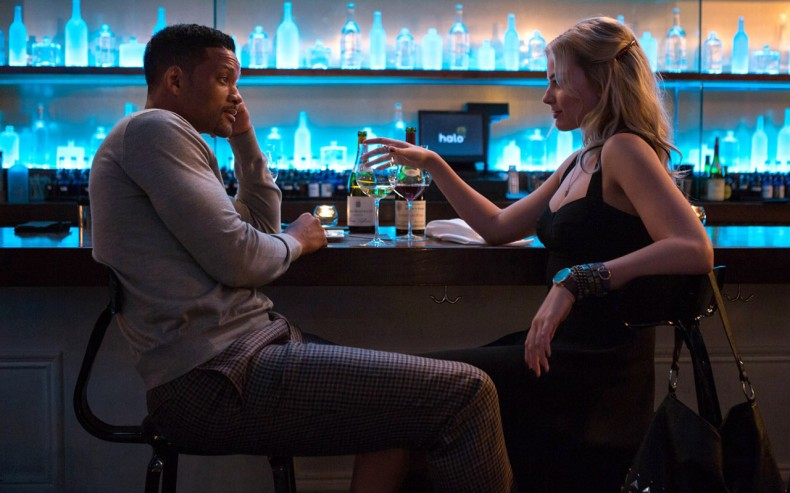 Focus may sometimes feel like a ton of great scenes in search of a great movie, but that’s still better than anything Will Smith has done recently.

The directing team of Glenn Ficarra and John Requa have somehow become the Hitchcocks of the romantic comedy. Their first two directorial features – I Love You, Philip Morris and Crazy, Stupid, Love. – hinged on legitimately shocking and credible twists that ended up actually elevating the narrative far beyond what’s come to be expected from the rom-com genre. In a way, Requa and Ficarra are con men themselves, which is fitting considering the subject of their third feature, Focus.

Rid of unnecessary punctuation, Focus is a slick crime caper starring Will Smith as Nicky Spurgeon, a veteran con man who decides to take on a new team member, the beautiful, smart, and eager Jess Barrett (Margot Robbie), who meets Nicky after unsuccessfully trying to rob him in her hotel room. Nicky realizes that Jess has an aptitude for his business beyond what he ever anticipated.

In fact, he finds himself falling in love with her. So he does what he has to do and drops her off at the airport with her cut of the money and an invitation to never see him again. Three years later, Nicky is running a job for a hotshot racecar owner (Rodrigo Santoro) looking to buy himself a little luck. There, he runs into Jess, who happens to be dating Nicky’s latest client. Through one scheme or another, Nicky realizes that seeing Jess is a sign that maybe he isn’t cut out for this kind of work anymore.

Focus is the kind of film that will only work if there are a ton of zany personalities flying in and out of the frame, some stylish camera tricks, and a lot of quickly delivered, witty dialogue. Oh, and a ton of one-liners. Thankfully, Ficarra and Requa are well aware of their responsibilities, and supply enough of each to last a lifetime. From scene to scene, there’s enough drama, humor, and style to make any viewer happy. And, for the most part, Focus is really a fun movie. But it doesn’t add up to much, and it sometimes feels as if the constant sensory overload is being used to con the audience into thinking they’re watching a great film.

However, it’s important to remember the most important thing about Focus: it’s actually fun. So many crime comedies tend to take themselves too seriously or not seriously enough, and Focus is just the right amount of sexy, dangerous, and tender to keep it unpredictable and thrilling. But cutting up the film into two unrelated halves and not giving Margot Robbie much of a character end up delivering major blows to what could have been a legitimately great crime comedy.

A lot of this film is entirely inconsequential, and lazily written to boot, giving the viewer an in-the-moment rush that must then be replaced by the next thrill or twist or reversal. It never adds up to much and, while it turns out to be a credible love story, the almost episodic nature of the narrative does the film no favors, especially when, as a character, Nicky insists on running a tight and efficient operation. The film itself doesn’t reflect his attitude, and so the final product is uneven and ultimately unsatisfying. Ficarra and Requa seem to be having so much fun devising creative plot twists that they forgot to actually lay them on a credible foundation, the very same foundation that made their first two movies so fulfilling.

The performances are all top notch, with scenes stolen by Adrian Martinez and Brennan Brown as two of Nicky’s closest associates. Smith and Robbie have an electric chemistry on screen despite the 23 year age difference, and Robbie continues to display an ability to develop character where there would otherwise be none. There are very few young actresses who are able to turn their sex appeal into an aspect of their characters, and Robbie’s self-aware approach to her work is refreshing and appealing. Although she was utilized far more in The Wolf of Wall Street, Robbie is an undeniable talent that will continue to develop into a distinguished and acclaimed Hollywood star.

Smith is reliably charming, and although Focus is definitely a step in the right direction, it isn’t quite the “dangerous” and artistic role he promised after the flop of After Earth. I can appreciate that working on this film has allowed him to be more open about his career trajectory, and I think Focus may be the movie to get him back on top, but if Smith really wants to make good on his promise he’s going to have to do more than say the f-word a couple times and do an above-the-shoulders sex scene.

Admittedly, Focus is the weakest entry in both Requa and Ficarra’s directorial oeuvre, but the fact that they are willing to take their signature style into uncharted territory like this makes it clear that they’re some of the most enjoyable and reliable big budget directors working today. I’m enthusiastic about their future projects, as well as a future collaboration with Margot Robbie in the upcoming war comedy Fun House. As for Focus, it’s an enjoyable, compulsively watchable film that will probably be played on cable TV for the next million years, but as cool and slick as it can be, it often feels like a $100 million dollar party that you weren’t invited to.

Josef Rodriguez is a writer, filmmaker, and musician living in New York City. He is often labeled as "that guy who didn't love Boyhood" and he finds himself liking Harmony Korine films more than he likes his own friends. When he's not stressing over turning in reviews on time, Josef can be seen playing guitar, watching "Spring Breakers," or trying to write the next great American movie.
You might also like
Margot Robbie

Review: The Wolf of Wall Street

by Taylor Sinople on January 13, 2014
Out of the backroom mob politics of “Goodfellas” and “Casino” and into the skyscraper offices of New York City’s financial district, “The Wolf of Wall Street” is a feverishly exciting dramatic thrill ride that deals with issues of overlength but finds its rightful place in the catalogue of Martin Scorsese’s best epics. When we meet […]
Comments
Leave a reply
Add Comment Register

END_OF_DOCUMENT_TOKEN_TO_BE_REPLACED
Taylor Sinople Picks: The 16 Best Films of 2016
Form and Function in Alex Ross Perry’s “Queen of Earth&...
Digging for Fire and Unexpected: Husband and Wife Process Parenthoo...
Every Thing Will Be Fine 3D Review