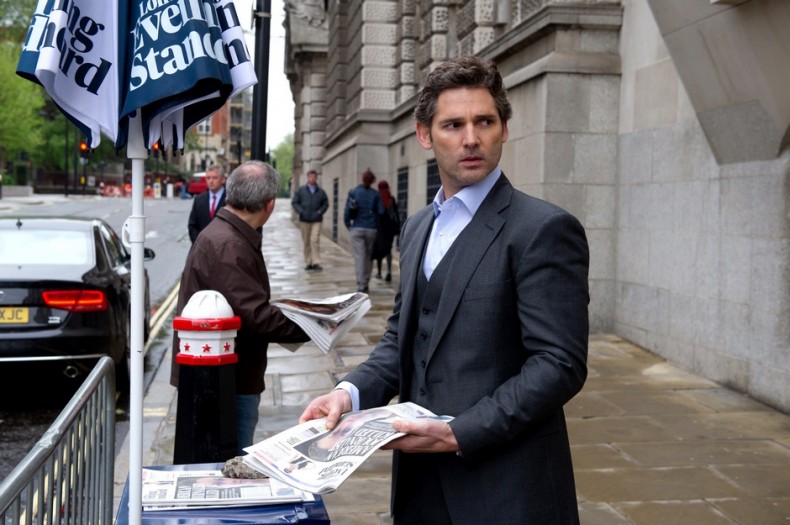 “Closed Circuit” succeeds with definite timeliness, but is overwhelmingly familiar when stacked against recent political thrillers.

John Crowley’s political conspiracy thriller “Closed Circuit” opens on the tiled images of 15 security cameras capturing the intimate, everyday moments shared by strangers shopping in a London market. Our brief, intrusive access is shattered by a sudden truck bombing that kills more than a hundred people in the square. A suspect, Farroukh Erdogan (Denis Moschitto) is quickly apprehended and charged with the act of terrorism.

Six months later, defense attorney Martin Rose (Eric Bana) is tasked with defending Erdogan after the previous barrister committed suicide before the case was able to go to trial. The high profile investigation is the case of a lifetime, but things are complicated when Martin’s ex-lover Claudia (Rebecca Hall) is named the special advocate responsible for defending Erdogan in closed court. Certain evidence in regards to the bombing violates policies of national security. Claudia is brought on to be the sole witness to this sensitive material. Martin will be responsible for defense in traditional “open” court, followed by Claudia’s discussion of the closed material that is kept even from Erdogan himself and the prosecutor.

Eager to pursue the case, Martin and Claudia agree to lie when asked whether they have any prior relations that would conflict their involvement in the case. They’re prohibited from meeting with one another or discussing evidence during the investigation, but when Martin begins to uncover faults in the terrorist’s story he quickly begins to unearth things powerful entities would prefer stay buried. He brings Claudia into the loop. The couple begin to question everything – from the identity of the terrorist suspect, to the legitimacy of the previous barrister’s suicide.

“Closed Circuit” is a fairly effective thriller steeped in mysterious conspiracy and driven heavily by dense dialogue. Keep up during the first act or the plot turns won’t pack much of a punch. Americans will have to battle the additional barrier of trying to figure out the English legal system that can be confusing even before the white wigs come on.

Eric Bana is a dependable face in any film and here he does well acting against an outstanding supporting cast that includes Jim Broadbent, Ciarán Hinds, and one of my favorite up-and-comers: Riz Ahmed. Bana throws everything he has into the role but the role doesn’t offer much back to him. Rebecca Hall’s performance is similarly untapped, and a brief and pointless cameo from actress Julia Stiles as an American journalist is offensively inserted for seemingly no other purpose than to get an American on the billing.

Screenwriter Steven Knight (“Eastern Promises”) pens a decent political thriller but ultimately invests more in story than the characters. Despite the warning in the title, I was actually irritated at just how closed the “Closed Circuit” is. It’s the type of film that isolates its characters into a world their own. There are MI5 agents and terrorists and upper echelon lawyers – but the average person, the person most likely viewing the film, aren’t represented onscreen. Subsequently, we’re forced to experience the events from a perspective that’s not all that relatable. Fine for campier spy thrillers, but “Closed Circuit” loses some relevancy by ignoring the potential to connect with audiences through crucially current themes.

The bad guys are transparent and a couple of character-related reveals are predictably dull, but the story related twists work much better and are often genuinely surprising. The film is at its best when channeling the modern anxieties of an omniscient government, but at its worst when trying to give these characters a decent romantic arc.

The final sequences of the film tumble into action-thriller – foot chases and heightened intensity. This endgame material is bold in its exposure of government manipulation, but it all but fizzles out with a largely unsatisfying ending that puts the thrill of the conspiracy on the backburner to focus on closing out the romantic subplot between Claudia and Martin. Every time the characters are put to the forefront, things fall apart. It’s a real weakness.

Visually, this is the same desaturated, urban portrayal of London you can see in all sorts of other pictures as recently as 2012’s “Skyfall”. Greys and greens, oh look there’s the Palace of Westminster. It’s great photography, but quite familiar. The interchangeable look could really hurt the film if audiences don’t find enough to distinguish it from similar films a year (or less) down the line.

It’s a little 70’s, a little contemporary. A little “The Conversation,” a little “Bourne.” It’s a lot of things, but it’s not distinct, not original.

Fortunately, the saving grace of the “Closed Circuit” identity crisis is in the highly effective edit, cut by Lucia Zucchetti. This is a story of two main characters and the two groups of ancillary players that surround them – complex stuff to tie into a digestible film, never mind the espionage plot that has most character’s true motivations obscured. The edit is consciously pushing the film forward in exciting ways, and as Zucchetti bounces between Martin and Claudia, she creates a compelling rhythmic intensity from what are essentially a series of conversations.

Indeed, nary a gun is drawn or fired in the film and yet stakes are kept high by a larger, more looming threat. What can be done when the authority you look to for safety and justice turns on you? The end-of-summer stretch gets a lot worse than “Closed Circuit.” It mostly worked for me, but it skates a thin line between being a fun political twister and a waste of a huge amount of talent.

Taylor is a Chicago-based writer and aspiring film historian. He is the editor here at TFP, and has contributed to a number of international publications such as Cinema Scandinavia, PopMatters, and Room 101 Magazine. He can also be found listening to podcasts, researching topics he has little use for, or running after a city bus.
You might also like
Ciarán HindsConspiracyEric BanaJim Broadbent

by Josef Rodriguez on September 14, 2014
Although “Eleanor Rigby’s” script doesn’t always rise to the occasion, it features some of the year’s best performances, and a truly well-crafted romance from first-time director Ned Benson.
comments
Leave a reply
Add Comment Register

END_OF_DOCUMENT_TOKEN_TO_BE_REPLACED
Taylor Sinople Picks: The 16 Best Films of 2016
Form and Function in Alex Ross Perry’s “Queen of Earth&...
Digging for Fire and Unexpected: Husband and Wife Process Parenthoo...
Every Thing Will Be Fine 3D Review