Reviews
1
1
previous article
Jazz and Spiritual Havens: The Spontaneous Rhythm of "On the Road"
next article
Review: The Admiral: Roaring Currents 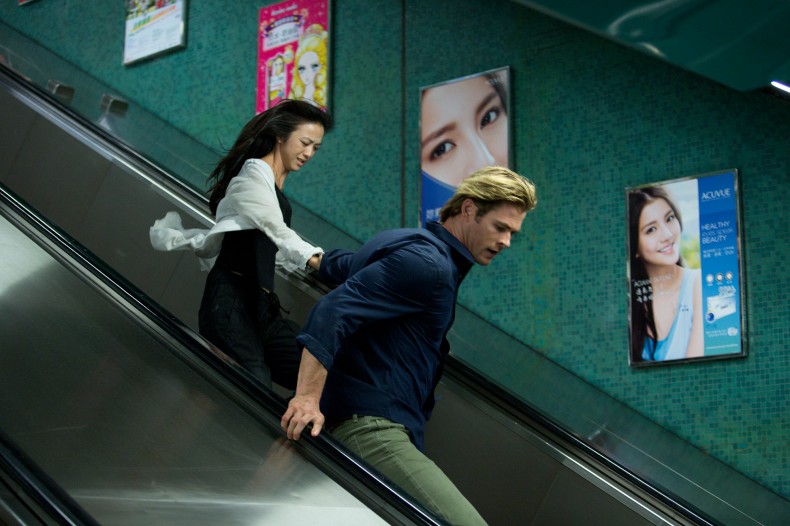 "Blackhat" is a restless and relentless assault from Michael Mann, dropping Chris Hemsworth into a hacker-out-of-time plot excused by remarkable cinematography and meticulous detail.

Michael Mann doesn’t have a reputation for half-measures. His career as a writer-director mirrors those of most of his protagonists: uncompromising perfectionists obsessed with their vocation, consumed with getting the job done properly. His go-it-alone tactical sensibilities are on glorious display in Blackhat, a consummate, furious return to feature filmmaking after 2009’s Public Enemies (and following an aborted and controversial turn anchoring the HBO horse-racing drama, “Luck”). It’s thin on plot (hacker vs. hacker!) but overwhelming in style, detail and vision, building to a series of stunning, vice-grip set pieces that pledge allegiance to modern Chinese crime cinema over staid American cat-and-mouse procedurals.

After a series of opening CGI shots that recall 2001: A Space Odyssey and immerse us in disaster at a Chinese nuclear facility, we’re briskly introduced to Nick Hathaway (Chris Hemsworth). He’s an incarcerated super-hacker whose old code was deployed by a mystery party to incite a near-meltdown in China. In a well-worn genre move, the only guy who can catch a bad guy is the worst of the good guys, and so convict Hathaway finds himself furloughed to track down the malicious coder. He’s supervised by C.I.A. special agent Carol Barrett (Viola Davis, terrifically severe) and paired with hacker pal and PLA computer security expert Chen Dawai (Leehom Wang), and his sister, Chen Lien (Wei Tang), a private-sector systems analyst.

The what and why of this joint American-Chinese task force jumping from Los Angeles to Hong Kong and Jakarta don’t matter beyond window dressing for Hathaway’s anxious quest to beat the clock. His failure to prevent further chaos will see Hathaway dumped back into a Supermax prison, a concern written on his face as his crew barrels through humid food markets and back alleys, chasing leads of a sometimes digital but mostly physical, gun-toting nature.

Chris Hemsworth does good, clipped work here in the typical format of Michael Mann’s no-nonsense heroes, avoiding contractions and moving with purpose. It’s easy to take shots that he’s too pretty, toned, or Thor-y to play a dangerous hacker, but there’s no more miscasting here than there was with Tom Cruise as a ruthless hitman in Collateral. Mann’s invasive and floridly lit digital cinematography (led by Stuart Dryburgh, of “Luck” and Texas Killing Fields) goes a long way toward making Hemsworth look more like a flesh-and-blood human than in any other starring role he’s had, leasing him a lean and lived-in gravitas. Of greater dismay is the casual way the film handles Hathaway’s deputation with the C.I.A. If an imprisoned hacker threatens the right federal personnel and is up on his Foucault, he’s apparently granted access to firearms in the field and sent to kick in doors and collect evidence.

Despite some of the sloppy plotting, Morgan Davis Foehl’s first feature screenplay features impressively scrupulous attention to detail. Shots and dialogue crackle with volumes of research that’s shown rather than told. There’s almost none of the goofy cartoon GUI that generally represents “hacking” in mainstream film, but plenty of Linux command lines and telltale coding hashes, seamlessly dramatized. Plot mechanic similarities to the 2010 Dow Jones “flash crash,” as well as the state-sponsored Stuxnet worm that infiltrated Iranian nuclear centrifuges, imbue the film with an urgent, real-stakes edge lacking in lesser so-called “techno-thrillers.” The visual detail dazzles, too, from the blinking blue diodes of a server room, to red-hot skittering ball bearings, to a sea of torches in a Jakarta street festival, all pulsating, swirling, and elevating the film to an abstract and frenetic high.

With so much control and craft on display, it’s a shame that the opening of the third act stalls out a bit, weakening the otherwise relentless pace as we’re torn from location to location. A romance between Lien and Hathaway also seems misplaced, if only for the reason that it conjures several scenes of bullheaded manifestos that remind us of much better execution by James Caan in Thief.

Blackhat ultimately isn’t about romance or even hacking, though. Much in the same way that David Fincher’s The Social Network used dorm-room coding as a surrogate for betrayal and capitalistic ambition, Mann hangs his outsized obsessive action epic on the framework of a timely, universal uncertainty over our digital vulnerability. That’s the hook, but in the end we’re just left with a man waiting for the big hammer to drop. As James Walcott assessed of the protagonist in Mann’s Heat, so goes for Hathaway: the reflection he sees in the mirror is simply that of a stranger, living on borrowed time, trying to keep moving.

Adam resides in Halifax, Nova Scotia, and enjoys running and trying to build a better veggie burger when he's not mainlining cinema. His preferred Peter Gabriel album is Peter Gabriel (Melt), and he dreams of someday buying a Eurail pass.
You might also like
Chris HemsworthViola Davis

by Taylor Sinople on September 30, 2013
Formula One World Champion Niki Lauda observes in the opening of “Rush”: “Twenty-five people start Formula One, and each year two die. What kind of person does a job like this?” The answer is what seasoned biopic director Ron Howard (“Apollo 13”, “Frost/Nixon”) spends two hours searching for. Lauda (Daniel Brühl), a strict, calculated German […]
comments
Leave a reply
Add Comment Register

END_OF_DOCUMENT_TOKEN_TO_BE_REPLACED
Taylor Sinople Picks: The 16 Best Films of 2016
Form and Function in Alex Ross Perry’s “Queen of Earth&...
Digging for Fire and Unexpected: Husband and Wife Process Parenthoo...
Every Thing Will Be Fine 3D Review