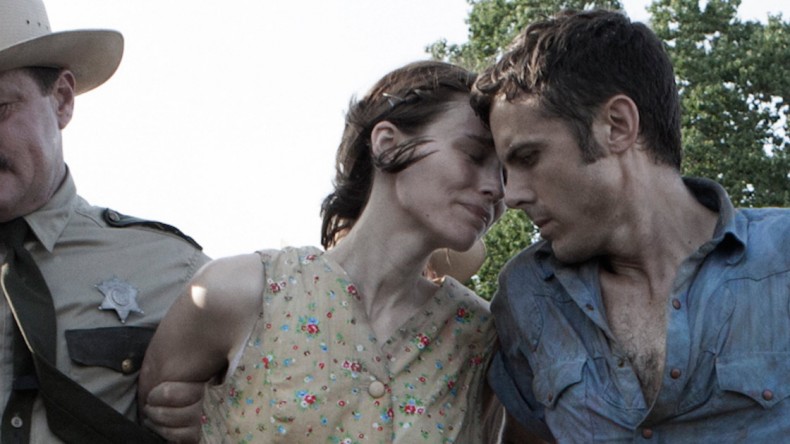 Don’t be put off by the strange title; “Ain’t Them Bodies Saints” is a visually transportive crime drama with rich atmosphere and wholehearted performances.

In a dingy, sepia-toned bar in 1970’s Texas, Bob Muldoon squares up to Sweetie – an old friend and the proprietor. Bob (Casey Affleck) recounts to Sweetie (Nate Parker) his very recent escape from prison. He was sentenced 25-to-life after a crime spree with his pregnant wife, Ruth (Rooney Mara), ended in a shootout. His wife shot the local Sheriff, but Bob took the fall for it. Four years into his sentence he escaped, and he’s out for one reason – to reclaim his wife and the daughter he has yet to meet and run away with them into an idealistic life of anonymity.

As he shares his plans with Sweetie, Ruth is on the other side of town attempting to live a life of normalcy as a single mother, still unable to move past her lost love and fighting the tender advances from the Sheriff (Ben Foster) – seemingly unaware of her crime against him. Bob is determined to reach Ruth, to be a father and a husband, but with the authorities and his personal enemies closing in on him there aren’t many outcomes that don’t end in bloodshed. What choice does Bob have? He hides out at Sweetie’s bar, regaling him for the night, and perilously moves on towards Ruth in the morning. “I used to be the devil, now I’m just a man.”

“Ain’t Them Bodies Saints,” stylistically written and directed by David Lowery, gets the “Bonnie and Clyde” similarities out of the way early on but never shakes the memory of “Badlands.” In an interview with Digital Spy, Lowery discusses his frustrations: “I guess you can’t really turn a camera on outside in Texas without getting Terrence Malick comparisons.”

Indeed, characters are occasionally bathed in backlit sunlight or followed around with a handheld camera; whispered narration is laid over stunning Texan nature imagery. Despite these visual associations, Lowery’s film isn’t written or structured much like typical Malick fare. This is straightforward filmmaking with clear narrative momentum and purpose, and thus very much its own machine.

Much of what there is to say about “Ain’t Them Bodies Saints” can be credited to Bradford Young – the cinematographer notable for winning the Sundance prize for cinematography for two separate films this year (including this one). Young has crafted an irresistibly cinematic piece of art rich with atmosphere and mood. He’s the type of DP who gets everyone up at 4am for the perfect sunrise landscape shot. Every frame is enticing in composition and light.

There are a few instances of pure white light – an ethereal sequence of a child’s birth, a nighttime conflict in front of the beams of a truck’s headlights – but the tonality of “Saints” is largely dominated by warm, dim light. In nearly every interior, Young places lamps in the frame to light the characters rather than with cinema-grade tungsten lights. In many cases, these lamps were actually used as the only source of light in the scene. The result is an incredibly moody softness to the look that Young has described as “shooting through a bottle of bourbon”.

If bourbon filters the image, then Daniel Hart’s score is the perfect sonic equivalence. The soundtrack is an outstanding collection of folk music that makes full use of instruments from the plucking of violins to wailing of banjos – all of which organically wrap around the cinematography and punch up the emotional payoff of the plot.

Lowery’s skill as a director here is in the building of quiet, background suspense that heats to a boil with the ensuing romantic tragedy. It works because the characters work. Casey Affleck (who has already gone back in time to brilliantly play Robert Ford) is resolute in his portrayal of Bob Muldoon. Several hushed monologues on his love for Ruth and the importance of being a father are impressive moments, and Lowery never allows Bob’s character to blow up into a cliché. It only helps that Affleck is playing against Rooney Mara, now a far stretch away from her thin characterization in “The Girl with the Dragon Tattoo.” Ruth is burdened with a secret that put her husband in jail and left her free. Mara has the challenge of advancing a character that chooses not to reveal her emotions to others. Ben Foster is at the top of his career as Sheriff Wheeler – a man flirting with the woman that he suspects may have shot him, and deftly tiptoeing around it. All of the actors in “Saints” have a powerful sense of place in the overall presentation – they really live and breathe for the 96 minutes they exist.

If there are missteps, they stem from Lowery’s odd crafting of the story. Atmosphere is outright nailed, but the plot isn’t always on mark. The screenplay sidesteps certain crucial moments like Bob’s breaking out of jail. On one hand, this pulls the focus away from conflict-heavy moments that have been done before, but without these broader conflicts it really is a quiet ride. Not a whole lot happens and it’s all very downbeat – this has to be your type of movie. The one time Lowery’s skittishness works (and I happen to love this) is in the brief, opening ten minutes of the film before Bob and Ruth are physically separated and arrested after the shootout. The image of their separation is the film’s iconic shot. It forces us to understand the strength of their love predominately while they are apart. It feels real – the way love can fade or multiply in times of detachment.

I was locked in during this viewing, aware of a few flaws (the off-tone end credits are for some reason styled as a western throw-back, talk about immersion breaking) but I was mostly utterly compelled by the on-screen beauty. The plot doesn’t fully elevate the outstanding visual bite into a masterpiece project, but “Ain’t Them Bodies Saints” is nonetheless one of the most artistically satisfying films of the year.

Taylor is a Chicago-based writer and aspiring film historian. He is the editor here at TFP, and has contributed to a number of international publications such as Cinema Scandinavia, PopMatters, and Room 101 Magazine. He can also be found listening to podcasts, researching topics he has little use for, or running after a city bus.
You might also like
Ben FosterCasey AffleckNate Parker

by Taylor Sinople on January 25, 2014
A 4-man Navy SEAL team is deployed in an Afghanistan mountainside to take down a known terrorist when they’re attacked by local Taliban forces. Outnumbered, backed against a cliff, and out of contact with command forces, the squad makes a desperate run for higher ground in a true story based on a memoir by Marcus […]
Comments
Leave a reply
Add Comment Register

END_OF_DOCUMENT_TOKEN_TO_BE_REPLACED
Taylor Sinople Picks: The 16 Best Films of 2016
Form and Function in Alex Ross Perry’s “Queen of Earth&...
Digging for Fire and Unexpected: Husband and Wife Process Parenthoo...
Every Thing Will Be Fine 3D Review