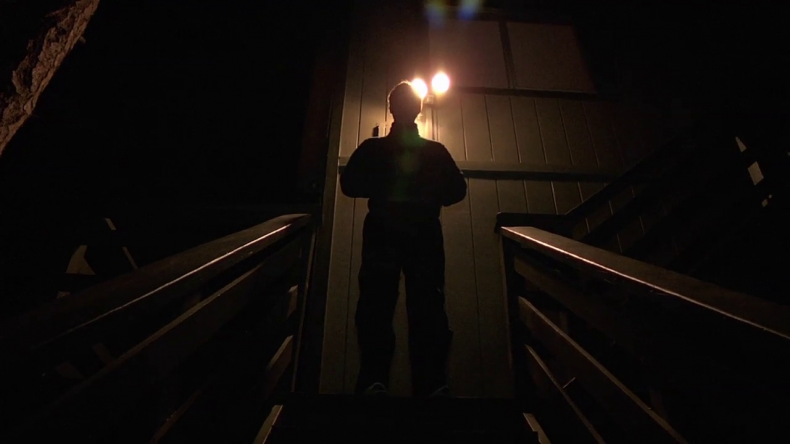 “Creep” finds Mark Duplass (“Safety Not Guaranteed,” “The One I Love”) and buddy Patrick Brice with a spare weekend, a digital camera, and a scary premise. Okay, it wasn’t nearly that simple – Brice and Duplass worked on the film for over a year – but this fusion of found footage horror and mumblecore dialogue is as close as we could hope to get to seeing what a few talented filmmakers would cook up with a few weeks to spare between projects.

And as a piece of found footage horror, “Creep” is refreshingly logical and features some of the most organic jump scares and sound logic since “The Blair Witch Project.” The title of the film puts a presumption in the audience’s head before they even buy their ticket. As the film is presented from the point of view of Aaron’s camera, we’re tightly linked to his emotional point of view. And with that title in the back of our heads, we question with Aaron whether entering a strange man’s cabin in the woods is a very good idea.

Before things get creepy, though, and even after they do, this thing is hilarious. This is my favorite Duplass performance yet and it’ll probably be yours, too. We meet his character as someone we’re familiar with – someone that makes sense for his real-life personality and look – and slowly teases whether everything he says and does is authentic. There’s just no looking at him the same way again.

Duplass worked in this space with 2008’s “Baghead,” but Brice, the film’s director, adds a more conventional momentum to the film and lends it broad appeal. Blumhouse Productions (“Paranormal Activity”) picked up “Creep” for U.S. distribution, but according to Duplass, by the time you see the first film, a full trilogy will be shot with all three films releasing in 2015.

The story could ultimately go to more interesting places in its final act, but if this is the new standard for found footage we’re in a far better place than we were this time last year. Stick around during the credits for an original song that sums up the mood of the whole film, and bring on “Creep 2.”

Taylor is a Chicago-based writer and aspiring film historian. He is the editor here at TFP, and has contributed to a number of international publications such as Cinema Scandinavia, PopMatters, and Room 101 Magazine. He can also be found listening to podcasts, researching topics he has little use for, or running after a city bus.
You might also like
ciff 2014Found FootageMark Duplass

END_OF_DOCUMENT_TOKEN_TO_BE_REPLACED
Taylor Sinople Picks: The 16 Best Films of 2016
Form and Function in Alex Ross Perry’s “Queen of Earth&...
Digging for Fire and Unexpected: Husband and Wife Process Parenthoo...
Every Thing Will Be Fine 3D Review