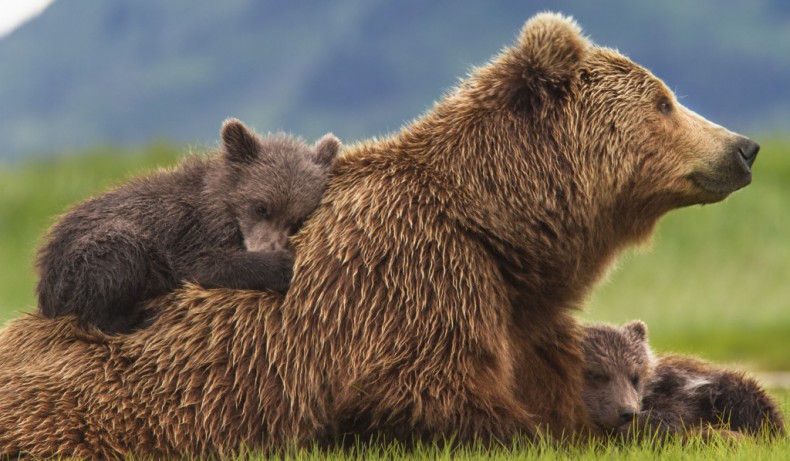 “Bears” is a fun little film about a family of bears living out bear lives and doing bear things in the Alaskan wilderness. While the film occasionally tries to pretend it has a plot or some story beyond the bears, it has no actual story, instead providing the viewer with an hour of footage of bears being bears.

There isn’t much substance to the film, or indeed, footage and images that haven’t been seen in some other film about the Alaskan wilderness. There aren’t glorious swooping shots of Alaska or of scenic vistas. Instead, there is a focus on this family of bears and their (mis)adventures. This tight focus on the bears works in the film’s favour, establishing this as a film that is not about some greater context or some bigger message, but just about bears. It allows the viewer to get more absorbed and understand more about these bears, as well as to admire them and what they do.

They are, of course, bears, and despite the narration’s attempts to personify them, there is a constant reminder that the viewer is watching footage of bears living out their lives. John C. Reilly’s narration represents by far the weakest part of the film, with his attempts to give a voice to baby bears and narrate their thoughts often being laughably bad, even bordering on obnoxious. While it is understood that this is not meant to be an educational documentary about the survival habits and lifestyles of Alaskan grizzly bears, equally, Reilly’s attempts to give voice to a baby bear fail succeed only in detracting from the immersion, reminding the viewer that they are watching a film. Even when Reilly’s narration isn’t anthropomorphising the bears, it still adds very little, except to add a human voice where none is required.

While “Bears” is fairly short, this, too, works in the film’s favour. Instead of dragging out a weak narrative or wear out the film’s welcome by flooding the audience with too many images of bears, the length sets a clear end goal and creates refreshing ambiguity about the fate of the bears. It is an optimistic film, but considering it opens with the general sentiment that it is difficult for baby bears to survive, a bit of ambiguity regarding the bears is very welcome.

Perhaps unintentionally, one of the most interesting strengths of the film is the interest it generates in these animals and their futures. The grizzly bear is an endangered species, and one of the things the film does extremely well is convey the majesty of their lives as well as the difficulties of survival. In portraying these animals, it inherently asks the audience to care, not only within the context of the narrative, but in the greater context of conservation as well. Films such as “Bears,” intentionally or otherwise, could potentially be used to generate interest and funding for preserving these endangered species and their environments. It is this additional benefit of the film beyond its surface-level enjoyable bear time that makes it more interesting than just a collection of film clips of bears. It is very successful in creating interest in bears, and in forcing the audience to engage with them when they might otherwise never have done so.

On the whole, “Bears” comes across as fulfilling the same purpose as a trip to the zoo. It gives the viewer the opportunity to watch animals while pretending they are learning something. “Bears” is less educational than the zoo, but provides just as much entertainment and just as much of an opportunity to enjoy nature and all the creatures

Janneke Parrish lives in South Korea where she struggles to order pizzas and consoles herself by watching far too many movies.
You might also like
John C. Reilly

by Marcus Michelen on October 18, 2014
Paul Thomas Anderson’s “Boogie Nights” is an entertaining and often tragic film that features some of Anderson’s most memorable characters, despite occasionally falling into cliché.

by Williamson Balliet on August 3, 2014
Director James Gunn’s penchant for hyperbole is form fit to the little-known "Guardians of the Galaxy," sneaking in ludicrousness and self-awareness behind layers of masterful production design.
Comments
Leave a reply
Add Comment Register

END_OF_DOCUMENT_TOKEN_TO_BE_REPLACED
Taylor Sinople Picks: The 16 Best Films of 2016
Form and Function in Alex Ross Perry’s “Queen of Earth&...
Digging for Fire and Unexpected: Husband and Wife Process Parenthoo...
Every Thing Will Be Fine 3D Review