Reviews
1
0
previous article
A Conversation with Kevin Asch
next article
Review: The Boxtrolls (with quotes from a Q&A with co-directors Graham Annable and Anthony Stacchi!)

Review: As Above, So Below 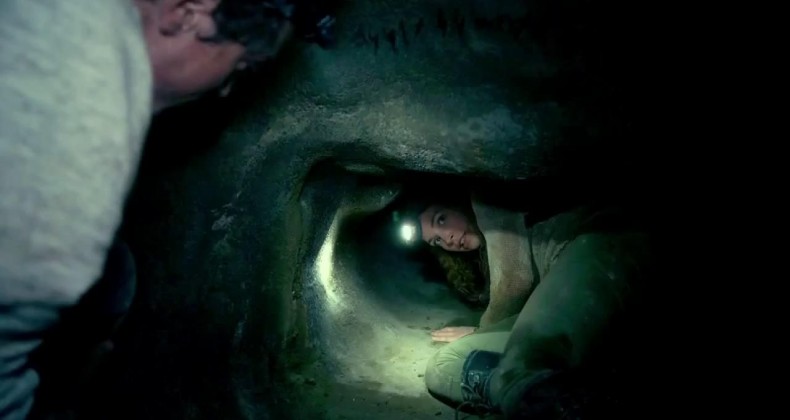 Filmed in the actual Parisian catacombs, “As Above/So Below” is another inventive, claustrophobic thriller from The Dowdle Brothers, who incorporate elements of Dante’s “Inferno” in a film that’s as ambitious as it is scary.

The Parisian Catacombs are one of the most infamous tourist attractions in the world. Led by a guided tour for the most curious of visitors, there are many corridors, hallways, and caves in the Catacombs that have gone undiscovered for many years. John Erick Dowdle, known for 2008’s “Quarantine” and the M. Night Shyamalan-produced “Devil,” is one of the only filmmakers to ever take a camera crew into the grave, which holds the remains of over six thousand people. The result is “As Above, So Below,” the bastard child of Dowdle’s previous forays into found footage and a more adventurous sensibility akin to “Indiana Jones” and “The Goonies.”

Equipped with two PhD’s, the ability to speak six languages, and experience spelunking into forbidden tombs around the world, Scarlett (Perdita Weeks) has spent her entire life trying to finish what her father, a similarly brilliant scholar, started. Although his life was cut short by suicide, Scarlett is convinced that he did not suffer from mental illness, and was instead consumed by what he discovered beneath the ground. Accompanied by a loyal documentarian named Benji (“The Purge’s” Edwin Hodge); George (Ben Feldman), an old flame who speaks fluent Aramaic and has a knack for fixing the unfixable; Papillon (Francois Civil), an adventurous explorer who apparently knows the Catacombs like the back of his hand; and Papillon’s two accomplices: his girlfriend Souxie (Marion Lambert), and his friend Zed (Ali Marhyar).

Each saddled with their own demons, the group enters the tombs with the knowledge that they’re sometimes known to keep what comes along. The deeper they go, the more they are forced to work together, battling their greatest fears and deciphering the numerous texts and riddles that bring them one step closer to their goal: the Philosopher’s Stone, a sacred jewel that is rumored to give its owner eternal life.

Co-written by Dowdle and his brother Drew, the brothers come prepared with a killer script based in centuries of classic fables and mythology. While the film does provide the requisite number of scares required for a horror film, including one particularly terrifying scene in which the group’s cameraman gets trapped in a narrow corridor, the Dowdles obviously have more on their mind. Infused with rich historical context, “As Above, So Below” plays out like a demented, R-rated reimagining of “Indiana Jones,” complete with ancient texts that correlate with what the characters must do to survive. What’s even better, the adventure-themed plot of the film allows the Dowdles to write characters worth rooting for, not ones that are created for the sole purpose of massacring as gruesomely as possible, which tends to be the case with most modern horror films, especially ones of the found footage variety.

The film’s basic conceit – that the Parisian Catacombs confront you with your greatest fears – only works as a result of these well-written characters that are forced through the literal gates of Hell, reading the inscription “abandon all hope ye who enter here” as they go. Dowdle uses every scare, regardless of its magnitude, to propel the story and character development forward in a new and interesting direction, never stopping to distract the viewers with unnecessary red herrings. With a uniquely claustrophobic depiction of the underworld, Dowdle creates an on-screen Hell that may be the most frightening ever committed to film, due mostly to his insistence on replacing the infamous inferno with an unbearably silent, dark, and endless tomb of isolation.

A relative newcomer, Perdita Weeks gives a wonderfully three-dimensional performance as Scarlett. Although she is undeniably gorgeous, her work in this film speaks for itself and proves that she is far more than just a pretty face, especially when the film requires her to convincingly utilize and balance both her physicality and intelligence, which she does without missing a beat. As her former lover, Ben Feldman is finally given a decent amount of material to work with for the first time since his minor but endearing performance in 2008’s “Cloverfield,” and he proves himself to be a more-than-capable leading man. The Dowdles smartly leave many aspects of their relationship unspoken, and the rising tension in the film parallels the unresolved romantic tension between the characters. As a result, the inevitably amorous catharsis feels earned and not obligatory.

There’s not much to say about the found footage subgenre that hasn’t already been said. For almost a decade, directors have been hopping on the found footage bandwagon to make a quick buck, usually with a moderate amount of success. However, John Erick Dowdle and his brother Drew are two originals in the found footage wave. Their 2007 debut, the deeply flawed but effective “The Poughkeepsie Tapes,” set into motion one of the most successful horror careers of the 21st century thus far. “As Above, So Below” is not the director’s scariest film – that honor still belongs to 2008’s “Quarantine” – but it is his best, and it’s one of the smartest and most original horror movies to hit theaters since “Paranormal Activity” made America collectively wet their pants five years ago.

END_OF_DOCUMENT_TOKEN_TO_BE_REPLACED
Taylor Sinople Picks: The 16 Best Films of 2016
Form and Function in Alex Ross Perry’s “Queen of Earth&...
Digging for Fire and Unexpected: Husband and Wife Process Parenthoo...
Every Thing Will Be Fine 3D Review