Review: The SpongeBob Movie: Sponge Out of Water 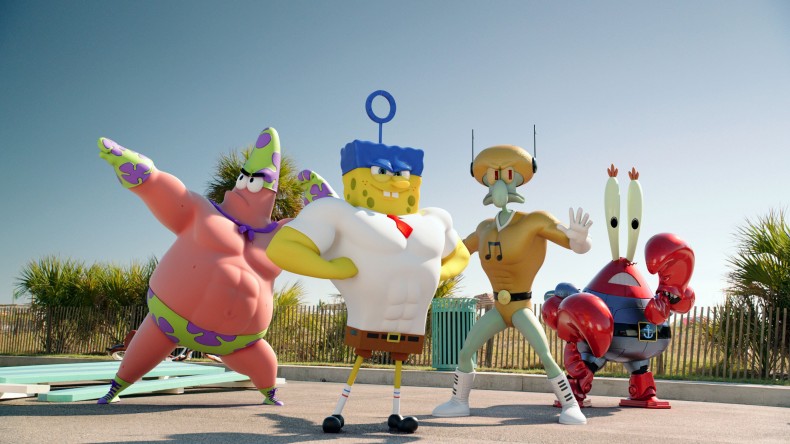 "The SpongeBob Movie: Sponge Out of Water" is unfocused and overlong even though there are plenty of laughs to be had.

When The Simpsons Movie was announced, fans of the legendary, long-running cartoon were skeptical. How could The Simpsons—a show that prided itself on its refusal employ extended plotlines—manage to fill a full 87 minutes without stretching itself thin? The answer that Simpsons creator Matt Groening (along with 10 cowriters) came up with was to create a sort of adventure/comedy hybrid. The Simpsons Movie is hyper-focused on a single adventure; it’s relatively tight story-telling is the glue that holds The Simpsons Movie together which allows the humor of the Simpsons family to stay around for an hour and a half without feeling tired. The SpongeBob Movie: Sponge Out of Water could learn a lot from The Simpsons Movie; The SpongeBob Movie is unfocused, meandering, and drags despite its often laugh-out-loud funny screenplay.

The SpongeBob Movie—not to be confused with the marginally better 2004 film The SpongeBob SquarePants Movie—begins in live-action with Antonio Banderas playing Burger Beard, a pirate who follows a treasure map to a mythic book. The book tells the story of SpongeBob SquarePants (Tom Kenny) and fills in newcomers to the TV series on the basic plot and the central cast of characters. As per usual, Plankton (Mr. Lawrence) is attacking the Krusty Krab—the greasy spoon where SpongeBob makes Krabby Patties, the food-of-choice of the denizens of the undersea city of Bikini Bottom. Plankton is planning to steal the secret formula to the Krabby Patty from Krusty Krab owner Mr. Krabs (Clancy Brown), but the sole copy of the formula strangely disappears as SpongeBob foils one of Plankton’s plans.

Without Krabby Patties, Bikini Bottom becomes a post-apocalyptic wasteland a la Mad Max. SpongeBob and Plankton team up to try to figure out what happened to the recipe and build a time machine in hopes to get it back. As promised by the film’s ad campaign, SpongeBob, Plankton, Mr. Krabs, Patrick (Bill Fagerbakke), Squidward (Roger Bumpass), and Sandy (Carolyn Lawrence) end up out of the water to confront Burger Beard as the film transitions from traditional animation to hybrid live-action and 3D animation; die-hard fans of the series need not worry though—this transition occurs well over an hour into the film, and our heroes spend less than 20 minutes out of the water.

As with the TV series, The SpongeBob Movie has its fair share of laughs. With a story by director Paul Tibbitt SpongeBob creator Stephen Hillenburg and a screenplay by Kung Fu Panda writers Glenn Berger and Jonathan Aibel, this is a film filled with all sorts of visual gags, character humor, puns, and non-sequiturs. This dream-team of writers have their sense of humor intact, but haven’t solved the problem of bridging the time-gap between the show’s 11 minute episodes and the film’s 93 minute runtime. Between the Antonio Banderas framing device and a mystic dolphin overseer, it’s hard to say that every minute feels essential. The whole secret-formula-being-stolen plotline was a staple of the TV series, and the film’s attempt to up the ante by turning Bikini Bottom into a wasteland feels like a forced change of pace rather than an organic way of raising the film’s stakes. This screenplay has a lot of great stuff in it—the spare references to the TV series are extremely well placed—but could benefit from a bit more structure.

The slightly-higher-budget traditional animation is in the same style as the series, and is quite nice to look at; SpongeBob was always a more visually interesting cartoon, exemplified by the ever-present psychedelic flowers and the movie is visually true to its source. The live-action and 3D hybrid scenes are less visually interesting. There’s something off about the 3D character design that’s just a bit off-putting but not quite venturing into uncanny valley territory. These sequences are brief, but their half-assed design makes them feel desperate, as if Tibbitt and Hillenburg are grasping to make a 16-year old cartoon still exciting to children.

One of the main appeals of the original series was the fantastic voice acting—let by Tom Kenny’s fantastic performance as SpongeBob—and everyone here turns in great voice work. Nearly all of these actors have been with the show since its debut in 1999, and you can tell that they’ve really lived with these characters for a while. Kenny and Lawrence have great chemistry together as SpongeBob and Plankton, and the rest of the cast help bring to life the humor that the film is built upon. Perhaps these great voice performances make The SpongeBob Movie even more frustrating; there’s really a lot of good stuff going on here, but there’s nothing going on here to bring all of it together. The lack of cohesion makes it hard to justify The SpongeBob Movie as a film; with how scattered this film is, you’re probably better off just watching a few episodes of the TV series.

Marcus is a graduate student of mathematics in Philadelphia. He is not related to the tire company of similar name.
You might also like
Antonio Banderas

by Josef Rodriguez on August 10, 2014
“The Expendables 3” is arguably the best film in the series despite its PG-13 rating, but it’s still too loud and too dumb to transcend the genre to which it pays homage.
Comments
Leave a reply
Add Comment Register

END_OF_DOCUMENT_TOKEN_TO_BE_REPLACED
Taylor Sinople Picks: The 16 Best Films of 2016
Form and Function in Alex Ross Perry’s “Queen of Earth&...
Digging for Fire and Unexpected: Husband and Wife Process Parenthoo...
Every Thing Will Be Fine 3D Review