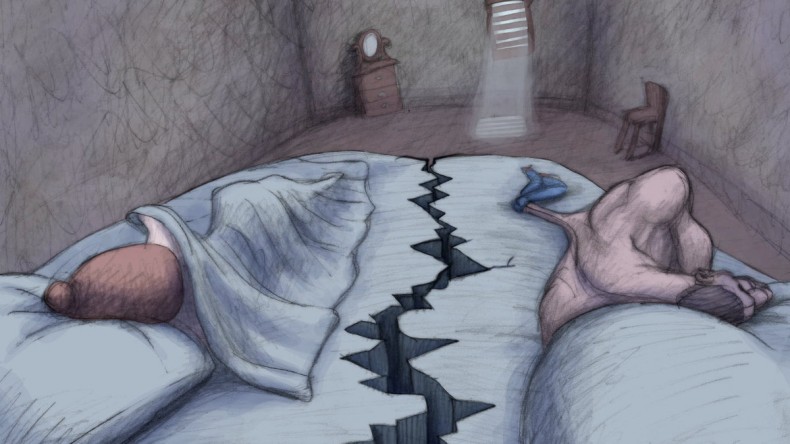 While it doesn’t necessarily have anything profound to say about love, and it doesn’t always answer the questions it poses, but Bill Plympton’s Cheatin’ is one of the most original, hilarious, and uniquely animated films of the year.

The art of animation has never been as varied and advanced as it is now, yet animator Bill Plympton’s new film Cheatin’ feels like a relic from the days of classic animation. Stitched together with over 40,000 hand-drawn images, Cheatin’ is the kind of film that Hollywood stopped producing many years ago. At 68, Plympton has made an animated feature that is funnier, smarter, and more alive than any Pixar, Dreamworks, or Laika movie released in the last three or four years.

The film tells the story of Ella and Jake, a lovestruck couple who are enjoying the early months of their marriage. Ella is a stay-at-home wife while Jake works the day shift at a local gas station. But when a meddling woman at the local mall falsely accuses Ella of engaging in an affair, Jake is absolutely heartbroken and begins seeking the brief, sexual comfort of other women. Ella, unaware that Jake is under such an impression, has her heart broken when she finds him consummating with another woman in a nearby hotel room. The two, both woefully oblivious to the other’s motives, engage in a cat-and-mouse game of lies and deceits, hoping to understand where and why their marriage fell apart.

Without a word of dialogue, Cheatin’ offers one of the year’s most idiosyncratic perspectives on love, marriage, and fidelity. While it isn’t exactly groundbreaking – Plympton is content to teach a new dog some old tricks – it’s inventive, hilarious, and visually resplendent, and Plympton is obviously enthusiastic about twisting and turning the narrative beyond all comprehension, even if the themes presented remain relatively straightforward. Scenes of Ella and Jake reveling in the happiness of their new marriage feature the idea of love as royal domesticity, including a gut-busting musical number set to “Libiamo Ne’ Lieti Calici” that beautifully encapsulates the idea that size and wealth have nothing to do with a feeling of grandeur; it is only love.

These are arguably the most ingenious scenes of the film, as they perfect the balance of emotional honesty, visual originality, and winning humor that Plympton is constantly striving for throughout. It doesn’t hurt that, narratively, Cheatin’ is one of the most insane films of the year, and its constant subversion of expectation is as surprising as it is satisfying. Plympton asks a lot of his audience, and the result sometimes feel like a series of sketches than a fully cohesive idea, but it’s doubtful that there is a film in theaters now that is as structurally bonkers as this.

Instead of confronting Jake directly, Ella befriends a scientific magician who has devised a way for two people to switch souls at will, which Ella uses to her greatest advantage. To begin with, Ella and Jake meet as a result of a freak bumper car accident which ends with Ella hanging upside down when an electric shock causes the currents to transfer to the car’s wheels. Jake’s repeated attempts at suicide upon learning of Ella’s affairs are thwarted by nature at every turn in the most preposterous ways.

Plympton isn’t necessarily asking his audience to agree with the film’s twists and turns, but just to go with them and accept the fact that, despite the film’s complete lack of physical realism, Plympton has a lot of truth to offer about the nature of relationships, betrayal, and forgiveness. Regardless of its contempt for the laws of physics and anatomy, Cheatin’ is obviously a very personal film, and one that will resonate with audiences of all shapes and sizes. Whoever says animation is only for kids just needs to take a look at Plympton’s work, recognize its brilliance, and promptly shut up.

END_OF_DOCUMENT_TOKEN_TO_BE_REPLACED
Taylor Sinople Picks: The 16 Best Films of 2016
Form and Function in Alex Ross Perry’s “Queen of Earth&...
Digging for Fire and Unexpected: Husband and Wife Process Parenthoo...
Every Thing Will Be Fine 3D Review