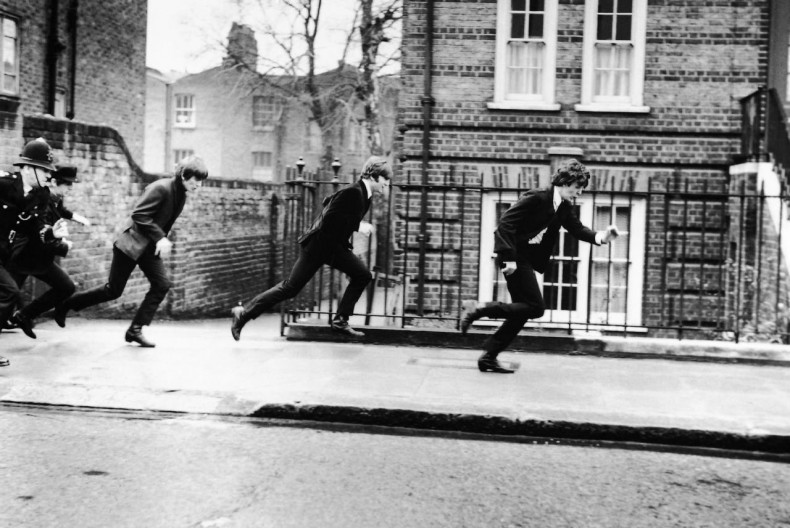 "A Hard Day's Night," one of the greatest rock-and-roll comedy adventures in existence, is a memorable mockumentary following "a day in the life" of John, Paul, George, and Ringo of The Beatles as fame takes them by storm.

If you want to know why the world fell in love with The Beatles in 1964, all you have to do is watch “A Hard Day’s Night.” Or better yet, watch it the way it was originally broadcast: on the big screen in all of its glory.

Back in theaters in order to celebrate the 50th anniversary of its original release – the first movie by the world famous act has never looked or sounded better. Brandishing a gorgeous new digitally restored print from the original camera negative, it also boasts a remixed and remastered soundtrack produced by Giles Martin (the son of legendary Beatles producer George Martin who originally wrote the music for the film).

No one could have predicated how groundbreaking “A Hard Day’s Night” would turn out to be, much less how it would continue to stand the test of time – becoming more vibrant and charming now than it was in 1964. Upon its original release, film critic Andrew Sarris of The Village Voice hailed it “the Citizen Kane of jukebox musicals,” and 50 years later, it still shines brighter than ever as a perfect example of pure, delirious, irresistible joy.

The Beatles were fans of director Richard Lester’s work, specifically his efforts with Peter Sellers and the Goons and his 11-minute short “The Running, Jumping and Standing Still Film.” Lester’s fly-on-the-wall, cinema style was a perfect fit for the Alun Owen’s uniquely humorous screenplay, whose expertly written dialogue confirmed the public’s perception of John Lennon as the witty one, Paul McCartney as the sweet one, George Harrison as the quiet one and Ringo Starr as the funny one.

But since The Beatles were not actors, their dialogue was kept short and simple, much like the plot itself, thus retaining a very realistic film style. It is simply 36 hours in the lives of the four as they went from being “in a train and a room, and a car and a room, and a room and a room.” Interesting side characters join them throughout their day: their highly strung manager (Norman Rossington), their slow minded roadie (John Junkin) and their temperamental TV director (Victor Spinetti), all leading up to the climax of the film – The Beatles’ live concert.

But as was always the case with the group, it was the music that solidified this film. In addition to the landmark title track, they performed some of their most vibrant hits for the picture, and at times emphasized The Beatles’ influence on the new format called the music video.

“A Hard Day’s Night” cost $500,000 to make and started filming just two weeks after The Beatles returned from their triumphant first visit to the states. It made being a Beatle look like fun, but also captured the darker unseen side, revealing just how much they had become the prisoners of their own unprecedented fame. An iconic band in an iconic film masterpiece, “A Hard Day’s Night” is a superb watch for any generation of Beatles fans, regardless of whether the year is 1964 or 2014.

END_OF_DOCUMENT_TOKEN_TO_BE_REPLACED
Taylor Sinople Picks: The 16 Best Films of 2016
Form and Function in Alex Ross Perry’s “Queen of Earth&...
Digging for Fire and Unexpected: Husband and Wife Process Parenthoo...
Every Thing Will Be Fine 3D Review