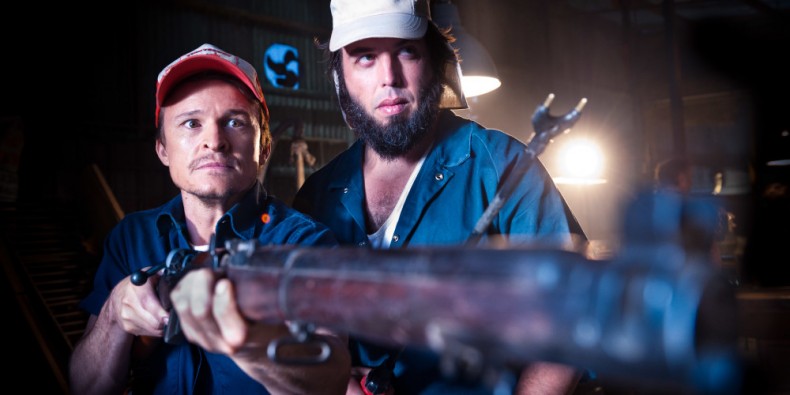 Anchored by two excellent performances and a mostly original story, “100 Bloody Acres” is a patient, rewarding take on a high-tension genre.

Brotherly directing duo Cameron and Colin Cairnes mash genres with their feature film debut, horror-comedy “100 Bloody Acres.” The film stars Damon Herriman as the peculiar Reg Morgan. Reg is driving his Morgan Brothers delivery truck when he stumbles upon a car crash that has left a man dead behind the wheel. Reg pulls over.

You see, the Morgan Brothers’ business has been booming ever since they began pulling dead car-crash victims out of wrecked cars and into their grinders. What’s more organic than a person? Reg is actually the mostly harmless younger partner to Lindsay (Angus Sampson), his frightening and abusive brother.

After loading up the dead guy, Reg passes by three young adult friends hitch-hiking next to their broken down car. He can’t help but let them in. They are Sophie (Anna McGahan), her boyfriend James (Oliver Ackland), and their mutual idiot of a friend Wesley (Jamie Kristian). The friends are en route to a music festival and ask Reg for a ride. Reg sees an opportunity to impress his brother by bringing him the three traveling kids alive for use in their next batch of fertilizer, but becomes conflicted when Sophie romantically manipulates him.

Reg isn’t the only one to feel Sophie’s allure. James has been dating Sophie for a while and even has a ring in his pocket, ready for a proposal. Meanwhile, Sophie is using their road trip to cheat on him with their friend Wesley. As the truth comes out (about both Sophie’s infidelity and Reg’s true intent), the romantic plot runs congruently with the horror plot that has the three friends attempting to escape once arriving at the Morgan Brothers’ farm.

“100 Bloody Acres” is a strong, easy to like film, damaged only by the sometimes imperfect screenplay. It starts off too conventionally, but quickly departs to more interesting territory only to return to conventions again. It amounts to a story that touches on a fair amount of familiar notes, but also some original, utterly unexpected ones.

The film leans more towards humor, and the performances that vocalize it make for a really fun time. The comedy comes from diverse sources, and the audience has to be as easily able to embrace the dry wit as the brutal black comedy. Moments like a dead man’s fingers getting chopped off in the hastily closed door of a delivery truck are hilarious in the context of this film. Some of the biggest laughs stem from Reg’s oblivious denial to his crimes as he accidentally becomes friends with his victims (“We’re not psychos, all right?! We’re small business operators!”).

Horror is approached thematically – it is a scary situation, not a scary movie. Not to suggest that ample amounts of blood and bone grinding don’t punctuate the lighter romantic triangle/square plot in really satisfying ways.

Performances from the three friends are competent and watchable, but the film truly succeeds with its villains: Reg and Lindsay Morgan. Damon Herriman is pitch perfect as Reg – awkward, somewhat innocent, and desperate for approval to the point of endangering others. Angus Sampson plays older brother with a terrifying note of recklessness and hits notes of violence on a whim. These characters are very strong; I would gladly spend another film’s length with them.

Visually, cinematographer John Brawley adds another successful link to a strong production chain with his light-handed style. I liked that the film was shot simply – the camera is following the story, not telling its own. Every shot is interesting to look at, without having to resort to gimmicky tricks of the genre.

Directors Cameron and Colin Cairnes have over a decade’s experience creating short films. I guess, then, it is not surprising that their first feature feels structured a whole lot like a short film. It’s not overlong, but has a very small arc that contributes to its charm. Much like a short film, the experience of watching “100 Bloody Acres” isn’t exhausting – it’s a light, fun journey into the kind of content that makes you laugh and cringe in trade. With a willingness to embrace the dark comedy and overall bloody extremity of the plot, “100 Bloody Acres” is some of the most fun you’ll have in theaters this year.

Taylor is a Chicago-based writer and aspiring film historian. He is the editor here at TFP, and has contributed to a number of international publications such as Cinema Scandinavia, PopMatters, and Room 101 Magazine. He can also be found listening to podcasts, researching topics he has little use for, or running after a city bus.
You might also like
Angus Sampsonblack comedyMidnight Movies

by Taylor Sinople on September 8, 2013
James Wan has had a big summer. The “Saw” helmer first put out “The Conjuring” a few months ago – a film I called a spectacular throwback to the genre’s best – and is now presenting the sequel to 2010’s “Insidious” only a few months later. I had dreamed of Wan going two-for-two and accomplishing […]
Comments
Leave a reply
Add Comment Register

END_OF_DOCUMENT_TOKEN_TO_BE_REPLACED
Taylor Sinople Picks: The 16 Best Films of 2016
Form and Function in Alex Ross Perry’s “Queen of Earth&...
Digging for Fire and Unexpected: Husband and Wife Process Parenthoo...
Every Thing Will Be Fine 3D Review