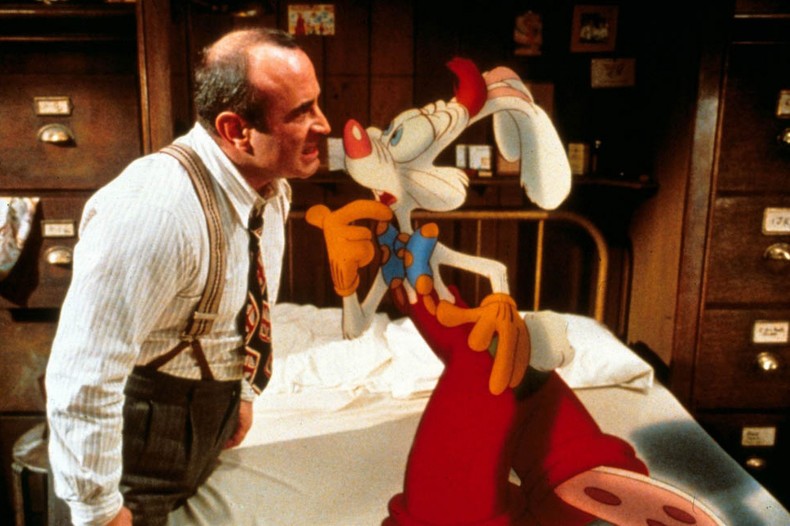 An ambitious mixture of hard-nosed topes and goofy animation makes Zemeckis' film unlike anything else, and it's absolutely splendid.

Toeing the line between different genres is no simple task for filmmakers, yet Robert Zemeckis masterfully balanced the yuks of cartoons and pessimism of hardboiled detectives with 1988’s Who Framed Roger Rabbit–adapted from Gary K. Wolf’s 1981 novel Who Censored Roger Rabbit? Even amid the mixture of live-action and animation, Zemeckis’ film provides a well-crafted story that renewed interest in animation.

In 1947 Los Angeles, cartoons and human beings coexist. Movie studio executives have a boundless amount of talented cartoons to star in their pictures and the cartoons have a steady line of work. But Eddie Valiant (Bob Hoskins), a washed-up and  gin-soaked private eye, can’t stand looking at “Toons” anymore after one killed his brother. And no matter the case, he refuses to work for them. Out of desperation, he takes a seemingly simple job from a movie executive, R.K. Maroon (Alan Tilvern), to tail Jessica Rabbit (voiced by Kathleen Turner), the wife of a famous Toon, Roger Rabbit (voiced by Charles Fleischer), and gets pulled back into the world he despises. Valiant takes compromising pictures of Jessica Rabbit with jokester and bigwig Marvin Acme–proprietor of the iconic cartoon company– and soon after Acme is found murdered with Roger Rabbit on the hook for the crime. With Acme’s last will and testament missing, one that proves ownership of all Toontown–a borrough of Los Angeles where cartoons reside, Eddie recognizes he and Roger have been set up, and the suspicious Judge Doom (Christopher Lloyd) may be linked to it all.

Screenwriters Jeffery Price and Peter S. Seaman not only use dialogue that captures the essence of Film Noir, but also incorporate enough jokes that evoke iconic cartoon tropes. What makes their feat all the more impressive is that they allow these two seemingly opposing ideas to play off of each other. As mentioned, Eddie’s brother was killed by a Toon. What is revealed in a dramatic moment is that the Toon “dropped a piano” on his head.  While this murder has all the makings of a traditional crime story, there are plenty of scenes where Toons have objects dropped on them, only to see stars or little birds circle around their head. But in this instance, a cartoon trope is used to facilitate a murder mystery. 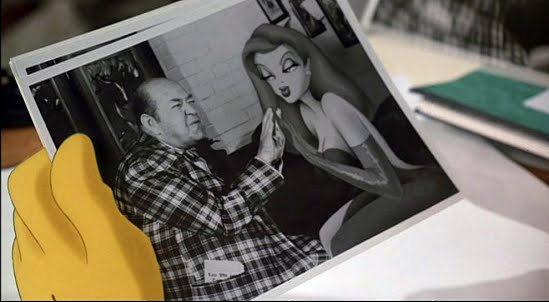 Another instance of this is when Eddie takes the compromising photos of Jessica and Marvin Acme. He constantly says in his tough guy bravado that he caught them playing “patty cake.” While this is thought to be a sexual innuendo, the two were actually caught playing patty cake.  In this scene, the conventions of a Noir story–infidelity–are the punchline to a joke.

Who Framed Roger Rabbit also boasts an extremely tight-knit story, as there a multiple details of the story that appear minute, but actually resurface at a later point. One instance is the “Simoleons” that Eddie refers to. This currency used by cartoon figures is what lead to his brother’s death. The pair were chasing a Toon bank robber that made off with a great deal of these Simoleons and he killed Eddie’s brother when he made his getaway. It is also noted that Judge Doom rose to power buy throwing Simoleons around to buy the election. When it comes out that Judge Doom is actully the Toon that killed Eddie’s brother, it’s clear that he used the stolen Simoleons to buy the election and further his own nefarious plan to destroy Toontown. Even Eddie’s backstory ties into the events of the dramatic present.

Another example comes when Eddie and Roger meet Benny The Cab (also voiced by Charles Fleischer). After their first interaction concludes, Benny remarks in passing that Eddie should “stick out [his] thumb” if he ever needs a ride. Fast forward to when Eddie and Jessica are looking for Rodger, but have no car. To show Jessica what direction he went, Eddie sticks out his thumb. In an instant, Benny is there to escort them. Every detail seems to play a create and understanding or help the characters later in the film. 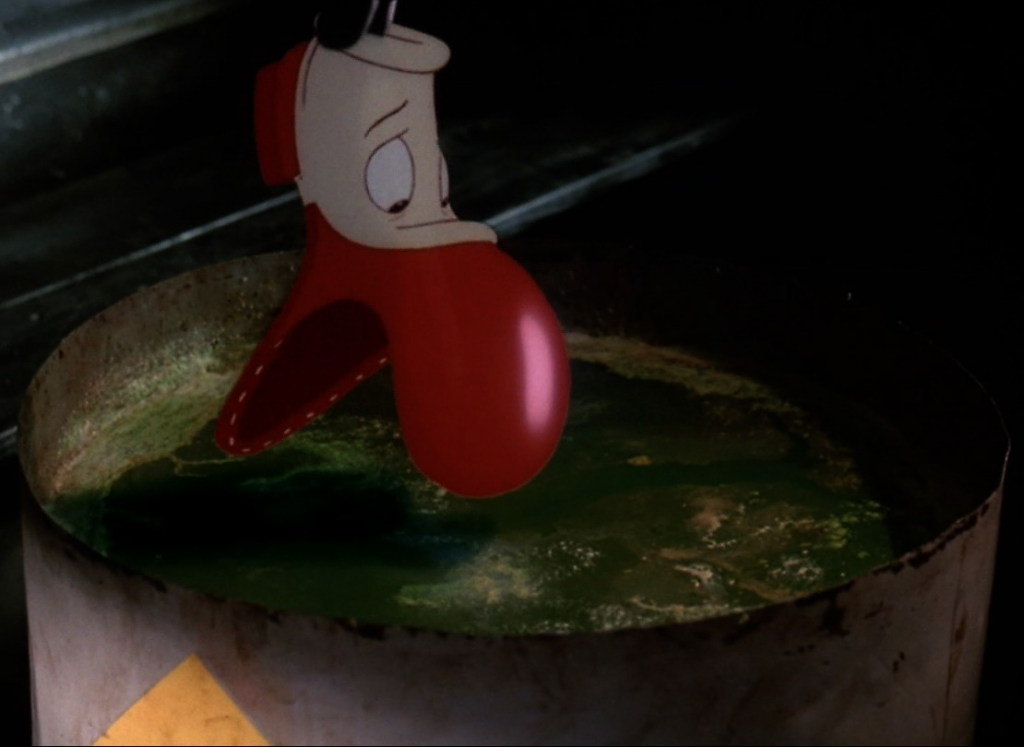 An innocent cartoon gets dipped.

Finally, there is “The Dip.” Judge Doom’s lethal mixture is known as the only way to kill a Toon. It’s described as a mixture of Turpentine, Acetone, and Benzene. After some internet research, this concoction is recognized paint thinner that animators can use to erase a design. This then becomes a moment of self-examination in the film, for Judge Doom dipping these characters is akin to an artist erasing cartoons. It is this attention to detail that make give the story the feel of high quality. 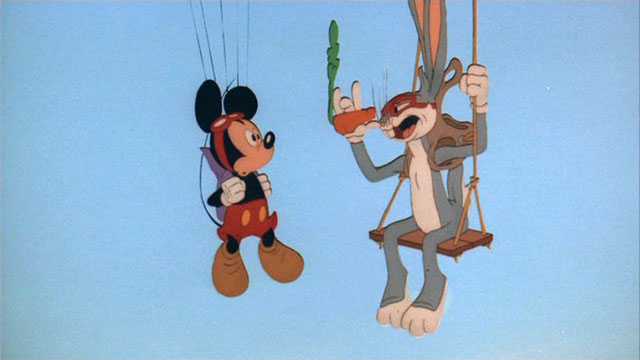 Bugs Bunny and Mickey Mouse on screen together.

Zemeckis bringing Warner Brothers and Disney characters together on one screen is perhaps more impressive that the blending of live-action and animation. With cameos from classic Disney and Warner Brother’s characters–Dumbo, Mickey Mouse, Bugs Bunny, Yosemite Sam, and many others– Who Framed Roger Rabbit brought back an immense appreciation for these characters. This led to an increased appreciation for animation, and according to Susan King, this film is responsible for the modern animation boom at Disney.

Between it’s high-quality story and deep understanding of both Film Noir and animation, it is clear why Who Framed Roger Rabbit was a box office smash, and its extensive editing process shows why it won Academy Awards for Best Film Editing, Best Sound Editing, Best Sound Mixing, and Best Visual Effects. The story walks the line between so many different elements, but does it in a fashion that works magnificently.

Due to an affinity for Classic Hollywood, Chris spends most of his time looking for the “newest” old movies to watch. When he’s not scanning Netflix, or annoying his girlfriend with movie references, Chris spends his free time wishing he could be Cary Grant.
You might also like
christopher lloyd

by Williamson Balliet on August 21, 2014
While watching “Sin City: A Dame to Kill For” it struck me that directors Robert Rodriguez and Frank Miller (again credited as co-directors) are completely unaware of the law of diminishing returns. There is a certain point in which adding more to a factor of a production will result in a decreased yield. In this […]
comments
Leave a reply
Add Comment Register

END_OF_DOCUMENT_TOKEN_TO_BE_REPLACED
Taylor Sinople Picks: The 16 Best Films of 2016
Form and Function in Alex Ross Perry’s “Queen of Earth&...
Digging for Fire and Unexpected: Husband and Wife Process Parenthoo...
Every Thing Will Be Fine 3D Review