Let’s just start off that I didn’t go on some epic perverted quest to sit down and work out which films gave me the most morally ambiguous boner. I already had about two thirds of this list kicking round my brain and appearing like that uncle at family parties every now and then so it wasn’t too much effort to push the proverbial boat out here. I mean with the list, not the uncle. 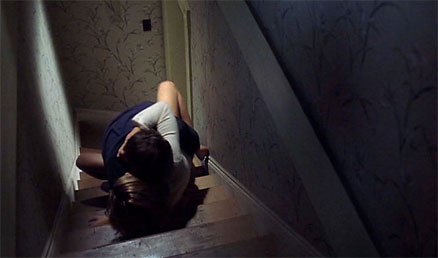 10. A History Of Violence

Right away, the title might hint that any scenes of a sexual nature could be laced with blood and aggression but I don’t think anyone was fully prepared for the stair fucking. That’s fucking on the stairs, not fucking the stairs (I probably could have reworded that to make it less ambiguous but I just wanted to make you wonder how one would go about violating stairs). After a particularly emotional scene Edie, the wife, wants to go and weep alone upstairs. Sadly her husband wants to “talk about it” and so he grabs her in order to keep her downstairs. Sound rapey? Kinda is. Yet about halfway through their tiff, there seems to be a switch flipped which makes the unhappy couple think that wooden stairs would make a great place to try out missionary position. (Spoiler alert – bruises!) It’s such an intense scene that probably makes ironically bearded media studies students ponder on what it means that sex hurts them in this way, but really it’s just messed up. I’ve heard of angry sex, I’ve heard of marital rape, I can even see how these two things might become linked and the lines blurred. But I would never slam my partner’s back down on hard wooden slats to get my rocks off.

Andy is an internet layabout who has little better to do than watch movies, eat Ben & Jerry’s and drink enough wine to float a reasonably sized yacht. When not on the internet, he can probably be found asleep, or at work, or both. For some reason he studied French literature and history and lived over in France for longer than he cared to. Some say that he is the next James Bond and is related to Jason Bourne (if only through marriage) but these people are often found dead in an alleyway. While an introvert, Andy is fully prepared to take off more clothes than is socially acceptable, climb on a table, and recite Shakespeare soliloquies to the tune of Billy Jean if you ply him with enough alcohol and money. His often explicit, but thoroughly interesting internal monologue can be found with his twitter handle: @sirandytaylor.
You might also like
fargo

by Peter Mahaffey on May 18, 2014
10. MASH (1970)  The plot: A crew of army doctors and surgeons in a camp near the frontlines amuse themselves in order to deal with the horrors of war. They pull pranks, play football, commit suicide, and cause more trouble than they need. Why it’s so great: Robert Altman’s signature is prominent in “MASH.” People […]

by Andy Taylor on July 25, 2013
The summer is over (at least it is on this side of the Atlantic where our annual week of blue-skied loveliness has been and gone) and therefore winter is coming, and will be upon us long before we’ve even thought about cleaning the barbeque. But worry not, because there is nothing better than curling up […]
comments
Leave a reply
Add Comment Register

END_OF_DOCUMENT_TOKEN_TO_BE_REPLACED
Taylor Sinople Picks: The 16 Best Films of 2016
Form and Function in Alex Ross Perry’s “Queen of Earth&...
Digging for Fire and Unexpected: Husband and Wife Process Parenthoo...
Every Thing Will Be Fine 3D Review