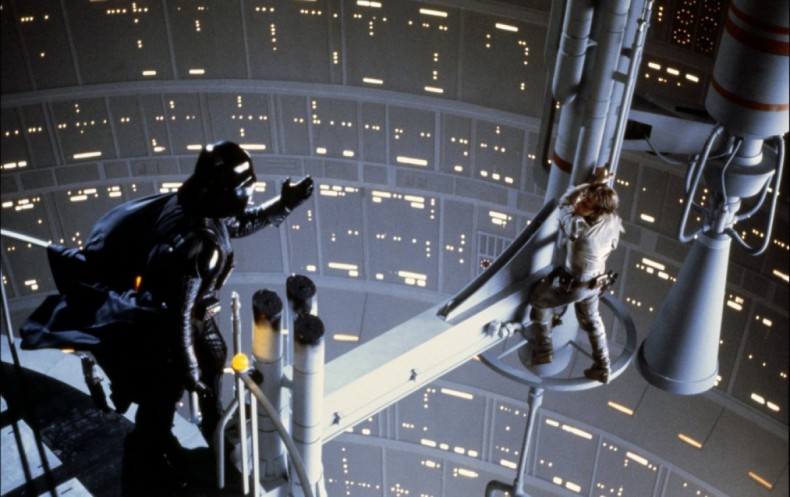 We’ve all seen far too many movies these days and yet the film studios haven’t seemed to have cottoned on to the fact that we’ve seen every possible incarnation of every story ever with the same tired clichés spattered all over the place. Thing is, if we’re honest, like deep-down-confessing-on-your-deathbed-that-it-was-in-fact-you-who-took-the-cookie-from-the-cookie-jar honest, then we would be able to admit that we’ve grown to like these moments that happen in almost every major blockbuster. Don’t believe me? Well there are five steps: denial, anger, bargaining, depression, and acceptance. You’re at step one and I’ve been through the programme and I’m here to tell you it gets better-ish.

10. Jumping through windows and not ending up in a pool of blood

Have you guys ever seen someone fall through a plate glass window? Nether have I but I imagine that’s because glass is usually double glazed these days and thus, harder to jump through. Not only do films ignore the fact that just about every window will react like a brick wall but also how do people not lacerate themselves? Jesus – this is like primary school stuff here. Glass, when smashed, is sharp and will cut you to shreds. It will slice up your clothes, it will shatter and get in your eyes and rip them to shreds too. It’s not pretty and it’s common sense. But God do we love watching people jump through windows without dying. And when it’s a few hundred floors up and the hero turns round mid-air and starts blazing away with guns in both hands, I’m not ashamed to say that a little bit of wee comes out I’m so excited.

I think that if I’m ever arrested and I’m not interviewed by two officers who are on opposing ends of the fluffiness scale I’ll be so confused that I’ll end up confessing to anything. Good cop bad cop is so ingrained into crime dramas these days that without it we think things are unrealistic and unrelatable. It’s sad and perhaps a little lazy on script writer’s parts but damn do we like some diametrically opposing forces in the interrogation room. Even better if it’s bad cop/psychopath cop.

8. Walking away from an explosion

I’ve yet to work out why the blustering fuck anybody would do anything other than run for cover when they know there’s a ma-hoo-sive explosion mere seconds away right behind them. And you can’t argue that they don’t know the big boom is coming because no hero ever shits himself and falls to the ground in surprise. Not to mention that explosions also contain lots of fire (spoiler alert) and this typically tends to burn things. How do all of these badasses manage to judge the distance perfectly enough so that not even a fibre of their suit is singed? I know that my dad made us hide behind a five foot wall when he lit a Catherine Wheel over ten metres away! That said, these scenes look so unspeakably cool that even though our inner scientist is screaming about the inaccuracies, we still want to be those guys walking away from billions of dollars of taxpayer funded damage repairs.

Ever tried a one handed pull up? Yeah, neither have the guys who write cliffhanger scenes where people hold on for dear life using only their pinky. That said, I love these scenes if only for the new and inventive ways the actors try to twist their faces to make us believe that they’re actually putting some physical effort into this.

For those of you who’ve ever seen a Spielberg film, any Lord Of The Rings, or anything where a random extra falls a long way for any reason, you will have heard the Wilhelm Scream. It’s part lazy sound editing and part nerd humour these days but anyway, here’s a twelve minute long compilation video of 50 Years Of Wilhelm Scream.

You know the moment. The big thing has just been blown up or whatever crazily implausible action that has to be done to stop it from happening, but *then*! It’s behind you! The bigger, badder, betterer thing that’s gonna really give you a headache in the morning! Cue another deus-ex-machina or perhaps just Orlando Bloom hopping up the legs by clinging to arrows and spears. While these tend to draw out fight scenes a little too long, there’s no denying that it’s FUN! Tasteless and awful when you actually consider the plot, but hey – perhaps they had some extra money to burn. And yes, I did just quote The Phantom Menace for the title of this section. Sue me.

The Incredibles highlighted this problem perfectly. “He starts monologuing! He starts like, this prepared speech about how *feeble* I am compared to him, how *inevitable* my defeat is, how *the world* *will soon* *be his*, yadda yadda yadda.” We all know it sucks and is the stupidest thing in the world Mr Bad Guy could possibly do, but it’s also where the script writers often come into their own and are allowed to let loose the crazy a little. I know that when I’m watching a big bad monologue, I may be cringing and/or screaming for him to just blow the hero’s brains out (I root for the bad guys) but I’m also listening attentively for the glorious snippets of sarcasm that I’ve waited the last hour for. If you’re still not convinced – watch The Matrix again and tell me you don’t love Agent Smith’s lines. They’re practically all monologues where he should just be spraying brains across the nearest wall.

3. That one badass guy who is bigger than Schwarzenegger with all the cool lines

Let’s face it, it’s probably Terry Crews these days. We almost expect the token black guy in the cast of a blockbuster (and when was the last time you saw a blockbuster where the racial minority wasn’t token?) to have nothing else to do but crack wise, have a big gun, and have precisely zero chance of getting out of whatever-pickle-it-is alive. But while this may be (in fact, it most certainly is) racist it’s still quality movie making. Big hulking black men are simply superior to big hulking white men. After all, when did you last see such a white dude without serious issues or an orange jumpsuit? And while we are finally getting round to casting such mavericks of cinema in actual roles these days (see Idris Elba in Pacific Rim) we still have a few years left of the token minority guy who gets loaded with all the sass and snark and makes you snicker while you frown about it being old hat.

2. If you didn’t see the guy die, he’s probably not dead

Thanks to our ever strengthening stomachs where violence is concerned, we now expect to see a dismembered bloody corpse with Satan feasting on the still warm spleen of the deceased whenever anyone bites the dust in modern films. We can argue whether or not this is a good thing (of course it is – you love the gore) but due to the gallons of blood and detached body parts we’re waiting for, whenever a character simply pops off the edge of a cliff or handily goes MIA off screen, odds are they’re all set to come back Deus-Ex-Machina style and save the motherfucking day yeah! It’s tired in just about every respect but you cannot deny the thrill, the rush of dopamine, that accompanies the turn of the head and the “Miss me?” before they swiftly decapitate a demon possessed zombie ninja vampire robot with a hammer.

Face it, while Star Wars is the immortal example and thus the only film allowed to get away with this without you wincing, it’s still pretty cool. Who wouldn’t want their daddy to be a big crime boss or a secret undercover mafia-posing cop? Secretly we always guess at this plot device hoping it to eventually turn out true and a) vindicate our sweet guessing skillz and b) make us smile inwardly with glee and want to point while squeaking “He did it! He did the thing like Darth Vader!” Oh, and while we’re on the subject, don’t you ever misquote The Empire Strikes Back in my presence and say “Luke, I’m your father”. Nerd up and wise up – it’s “No *I* am your father” with so much emotion in that “I” that whoever you’re talking to scrunches their face up like Ann Widdecombe sucking a lemon.

Andy is an internet layabout who has little better to do than watch movies, eat Ben & Jerry’s and drink enough wine to float a reasonably sized yacht. When not on the internet, he can probably be found asleep, or at work, or both. For some reason he studied French literature and history and lived over in France for longer than he cared to. Some say that he is the next James Bond and is related to Jason Bourne (if only through marriage) but these people are often found dead in an alleyway. While an introvert, Andy is fully prepared to take off more clothes than is socially acceptable, climb on a table, and recite Shakespeare soliloquies to the tune of Billy Jean if you ply him with enough alcohol and money. His often explicit, but thoroughly interesting internal monologue can be found with his twitter handle: @sirandytaylor.
You might also like
star warstop 10

END_OF_DOCUMENT_TOKEN_TO_BE_REPLACED
Taylor Sinople Picks: The 16 Best Films of 2016
Form and Function in Alex Ross Perry’s “Queen of Earth&...
Digging for Fire and Unexpected: Husband and Wife Process Parenthoo...
Every Thing Will Be Fine 3D Review