Over the years, British cinema has certainly been influential in terms of both style and substance. At their best, British films are masterpieces of the big screen. From the realities of David Lean films, to the raw humanity of Ken Loach and Carol Reed, via the ingenious comedy of the Monty Python series and Ealing Studios comedies, British films are brimming with creativity, wit and passion. Being English myself, I hold the masterful, awe-inspiring cinematic works of my culture particularly closely.

In this list I have aimed to include a high level of diversity, in terms of genre, director, cast, and year of release. Due to these limitations, there are plenty of films that I was subsequently unable to put on this list much to my dismay, such as: the cult-classic “Hot Fuzz,” influential horror “28 Days Later,” or the legendary “The Bridge on the River Kwai.”

So with that, take a look at my personal list of the Top Ten British Films, and if you have any opinions of your own please feel free to comment – I’d love to hear it. 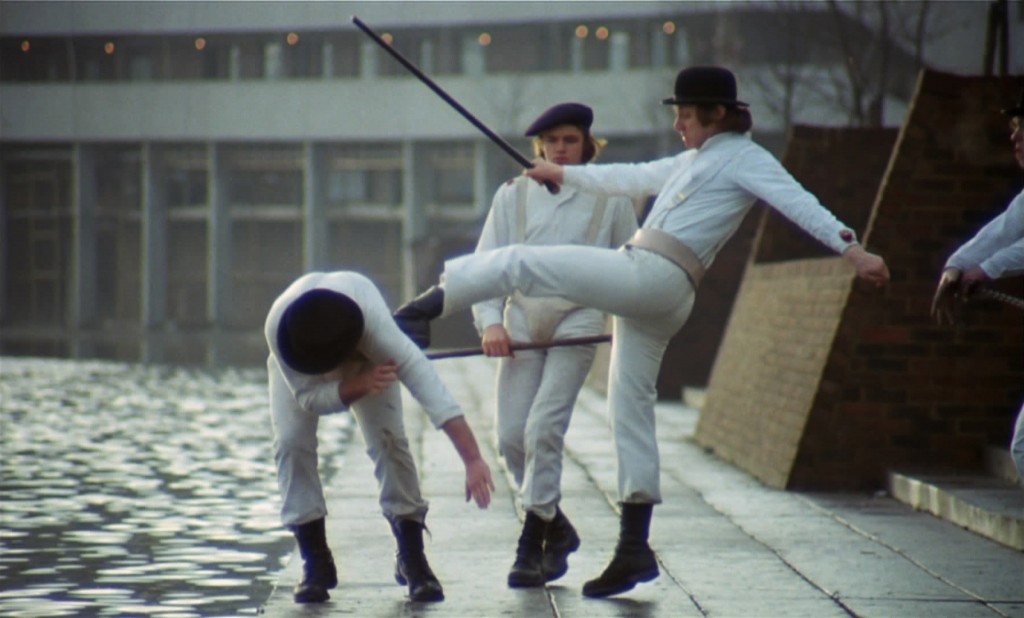 The plot: Set in a dystopian English society, a young Beethoven-loving Alex and his ‘droogs’ wreak mayhem wherever they go.

Why it’s so great: Despite Stanley Kubrick being a Manhattan-born director, “A Clockwork Orange” is still considered a wholly British film; with an all-British cast, UK-based filming locations, and inspired by British author Anthony Burgess’ book, it certainly has all of the necessary elements. Malcolm McDowell stars as Alex, leader of a gang ‘droogs’ (friends), who perpetrate ‘ultra-violence’ at their own will – rape, mugging, fighting and murder are among their list of everyday activities.
The vividly futuristic set designs by John Barry, eerily synthesized electronic score by Wendy Carlos, the colorful and ingenious cinematography by John Alcott, and the original slang-inspired jargonistic language of Burgess’ novel, produce both a striking and unforgettable film. McDowell deserves acclaim as the deeply disturbing yet sympathetic Alex, as he requires a level of likeability without condoning the violence that he demonstrates.
This is Kubrick’s astonishing commentary on societal violence, raising many thought-provoking questions such as how violence can be removed from society, and if we are deprived of our free will, do we ultimately lose our humanity? Outstanding and definitive, “A Clockwork Orange” remains as relevant today as it was over forty years ago. 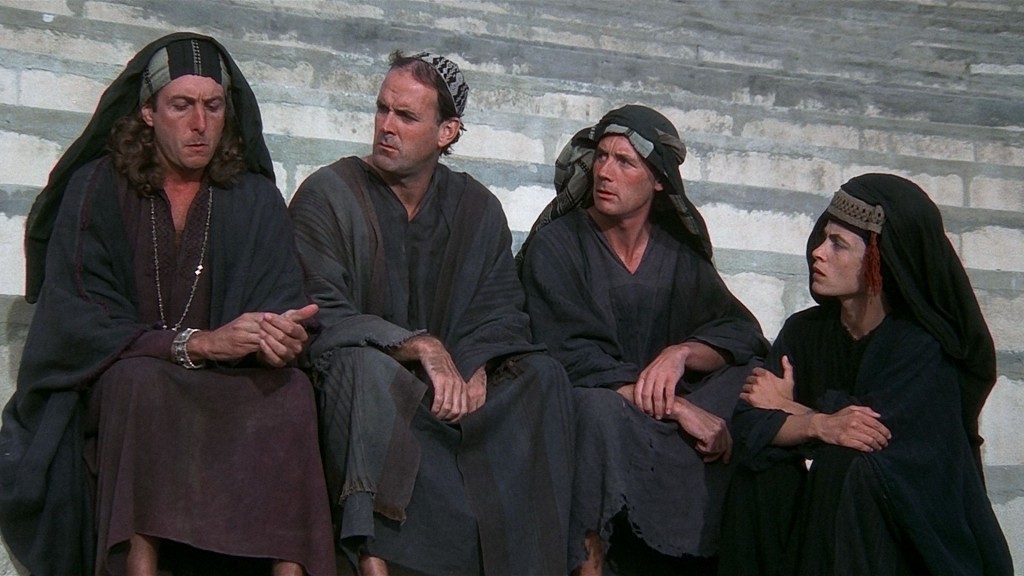 The plot: A satire of Biblical films and religious intolerance, the film focuses on Brian who is mistaken for a prophet, and ultimately becomes a reluctant Messiah.

Why it’s so great: There is no film that embodies British comedy quite like “Life of Brian.” Full of piercing satire, absurd visuals, and memorable dialogue, this picture is one of the best comedies in film. The plot follows a young Jewish man named Brian Cohen (Ben Chapman), who is born in the stable next door to Jesus Christ on Christmas Day. Consequently, he spends his life constantly being mistaken for the Messiah, but instead of glory and praise, he ends up on the run as a fugitive.
This is not however, a film to take seriously. It relentlessly picks apart every religious and political institution possible, but with its sheer wit and quality of execution, it is impossible not to laugh. Starring Monty Python regulars like Eric Idle, John Cleese, Terry Gilliam, and Terry Jones all playing supporting roles, “Life of Brian” is a must for anyone with a true passion for comedy. 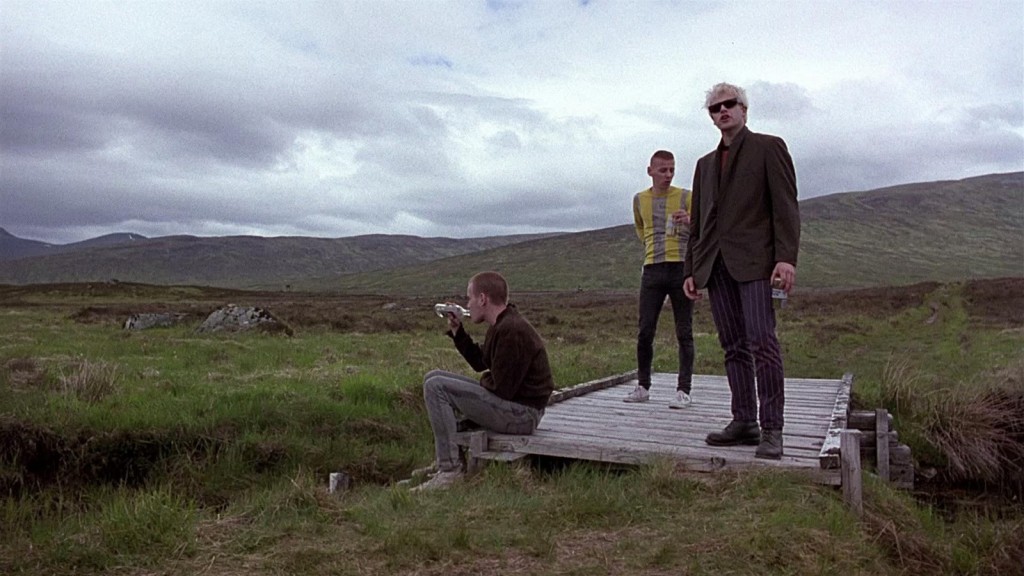 The plot: A group of rebellious Scottish youths turn to heroin in order to escape the vapidity of their modern, everyday lives.

Why it’s so great: Based on Irvine Welsh’s novel of the same name, “Trainspotting” managed to bring director Danny Boyle’s talent into the international cinematic eye, and became an icon of 1990’s counterculture. Focusing on a group of heroin-addicted lower class citizens living in an economically depressed Edinburgh, the film does not hold back from a realistic discussion of drug use.
Thus the film presents an honest story, which oozes with gritty, funny, and disturbing details through themes of addiction and friendship, providing a truly sensory experience. Dark and unforgettable, “Trainspotting” is an achievement in terms of style, story elements, and central performances, whilst offering an entertaining yet deeply unsettling insight into the true horrors of drug use. 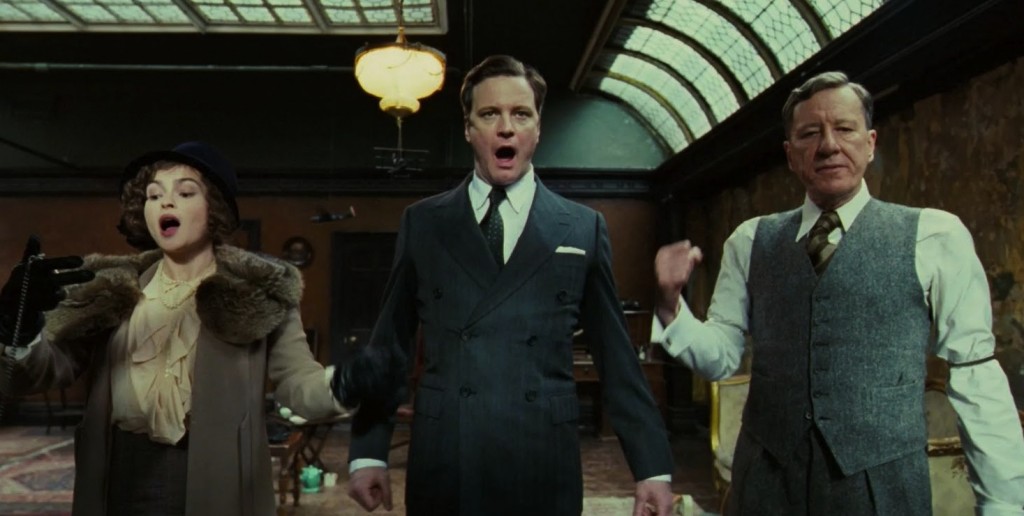 The plot: Prince Albert, who has suffered from a debilitating stammer his entire life, is suddenly crowned King George VI of England. With war on the horizon, and in desperate need of a leader, his wife Elizabeth and future Queen Mother seeks the help of a speech therapist.

Why it’s so great: Tom Hooper directs this stunningly acted biographical film with just the perfect balance of subtlety, humor, and emotional mastery. The two leads – Colin Firth as the unprepared King and Geoffrey Rush as his eccentric speech therapist – are expertly cast in their refined and sympathetic portrayals. Screenwriter David Seidler’s work is truly commendable as he educates the audience on the heavily misunderstood causes, challenges and traumas faced by those with speech impediments.
The film hinges on the developing, unlikely friendship between the wealthy and temperamental Prince Albert, along with poor speech therapist Lionel Logue as they learn to understand one another and the trials and tribulations of their own lives along with the different classes. Deservedly, “The King’s Speech” won an Oscar among its many other awards, and will no doubt live on to be a timeless treasure. 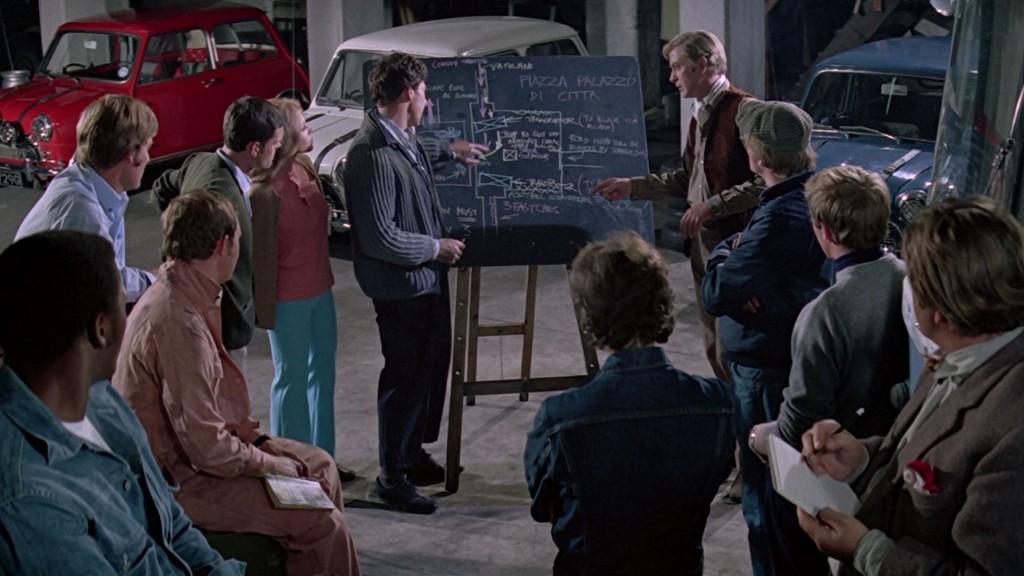 The plot: A small team of gold thieves set out on a daring heist in Italy, with the mafia trailing right behind them.

Why it’s so great: The cult classic British escapade film of the 1960’s, “The Italian Job” is a slick, fast paced adventure, which chases a team of criminals throughout one of the biggest international gold heists in film history. Michael Caine stars in one of his most famous and beloved roles of his career, as a criminal freshly released from prison and an eye for riches.
Collinson did well in creating a smoothly entertaining, and intelligent crowd-pleasing spectacle; brimming with colorful characters with witty exchanges, skillful car chases, clever twists and turns, and one of the most praised cinematic finales of all time. With its unique setup, likeable characters and memorable script, this 60’s comic caper is one of the best of its kind. 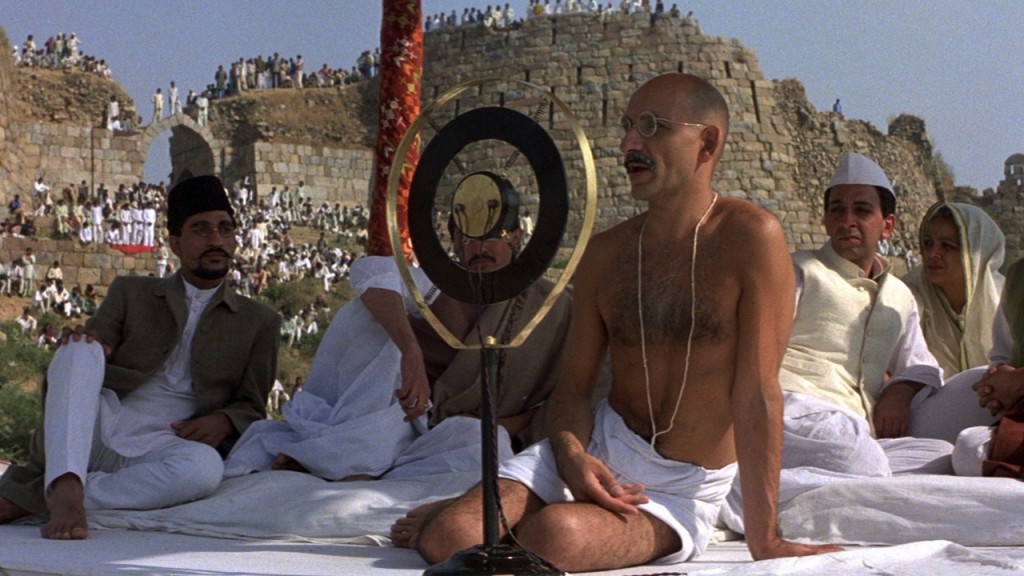 The plot: This epic biographical film focuses on the legendary Indian leader, as he utilizes peaceful means in order to free his homeland from British rule.

Why it’s so great: This grand epic traces Mohandas K. Gandhi and his mission to gain India independence via non-violent and peaceful methods. Ben Kingsley deservedly won numerous awards for his transformational performance as the political leader in his flawless on-screen debut. “Gandhi” offers us a philosophical experience, as it teaches us about a true visionary and manages to portray with great sensitivity the agonies, traumas and frustrations of political leadership, that ultimately transform a private man into a public icon.
The film vividly depicts how Gandhi’s courage and determination united his homeland beneath an umbrella of moral idealism, and how his philosophy and personality left an everlasting mark both on his nation, and the world. An epic biography in terms of both scope and scale.

Why it’s so good: An intelligently and expertly made epic that rightfully won the Best Picture award of 1962, this film stars Peter O’Toole as the titular character, an eccentric British officer during WWI who rallies Arab allies in order to combat the Turkish. O’Toole, in his breakthrough film, earned an Oscar nomination as the famous hero, with some superb support acting from the likes of Alec Guiness as Prince Faisal.
The film has been appropriately honored for its production design, photography, editing, sound and score. The small, subtle details in each and every grandiose frame along with a delicate story of identity and allegiance, makes this film the legend that it is today. 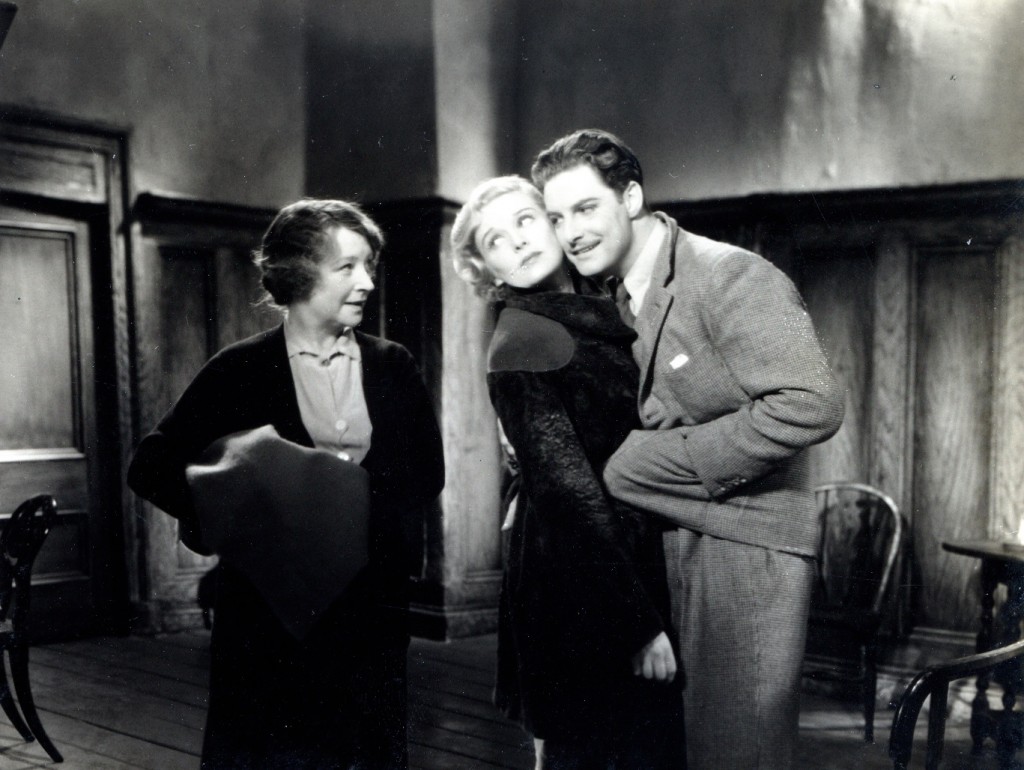 The plot: A man falsely accused of murdering a spy races across Scotland, whilst unwillingly handcuffed to the woman who turned him in.

Why it’s so great: Without a doubt one of Hitchcock’s finest British films, it is as entertaining today as it was eighty years ago. It goes without saying that the master of suspense fills his adaptation of John Buchan’s novel with some truly iconic and unforgettable moments. But what truly lifts this above subsequent thriller-chase films is the spark between characters Richard (Robert Donat) and Pamela (Madeleine Carrol), reluctantly handcuffed together for much of the film. In scenes such as pretending to be newlyweds in order to share a hotel room, their antics and exchanges push the movie into comedic genius territory. Even in an age of 3D spectacles, black and white masterpieces like this can still take your breath away. 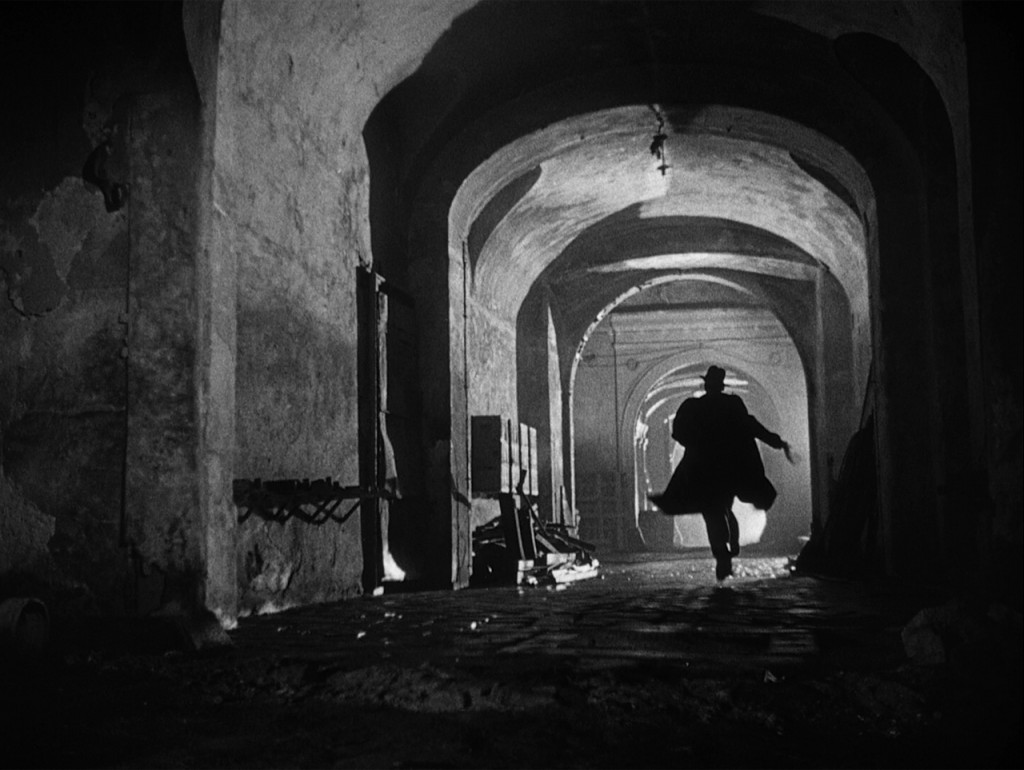 The plot: After pursuing an investigation of a friend’s death, a man uncovers a world of corruption in post-World War II Vienna.

Why it’s so great: Carol Reed’s narrative surrounding the mysterious Harry Lime (played by Orson Welles) set in an Allied-power occupied Vienna is a genuine classic, and perhaps British cinema’s most successful attempt at a Hollywood-style noir masterpiece. Stylish and suspenseful, the viewer is thrown back into a world of beautiful Italian architecture, cobblestone streets, and romantic cafés which stand in stark contrast to the underground network of sewers that were patrolled by police for those involved with the black market.
Oscar-winning cinematography by Robert Krasker contains some reminiscent traits of German expressionist films, and the titled angles reflect the uncertain tone of the film. Accompanied by a perfectly fitting, zither based music score; it is easily one of the greatest films in cinematic history. 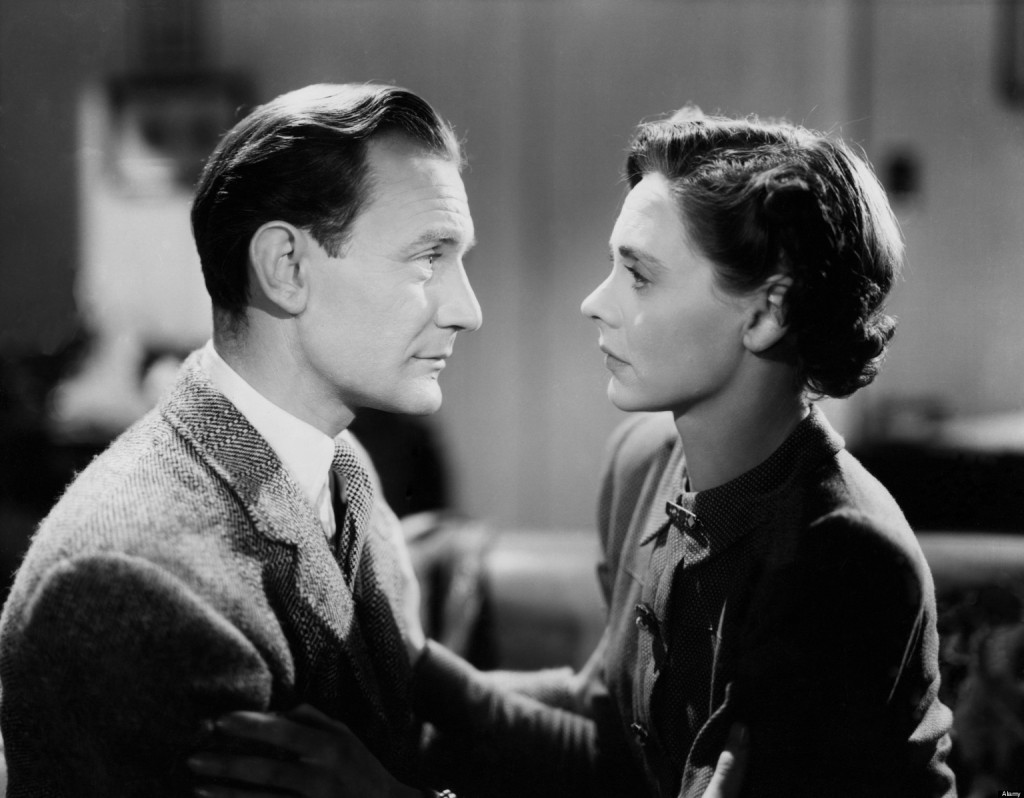 The plot: Two married strangers unexpectedly meet at a train station, and find themselves drawn into a short yet sentimental romance.

Why it’s so great: “Brief Encounter” is a 1945 film gem directed by David Lean. Intense and unforgettable, it touches on the social dramas involved with an unspoken lust for a forbidden romance; underscored by a perfect use of Rachmaninoff’s Second Piano Concerto. Qualities of the film noir genre litter this picture beautifully, such as the dismal rain-covered streets, less than glamorous locations, and dimly lit passages, that reflect the unfulfilled and fleeting love of the story.
With some remarkably touching, realistic and emotional performances by the wonderful Celia Johnson and stiff upper-lipped Trevor Howard, this masterpiece perfectly captures a true down to earth romance in all its glory. The films perfect acting and memorable cinematography add to what is arguably Lean’s magnum opus, and is deservedly considered one of the greatest directors of all time.

Jess is a 21 year old university student studying English Literature. Born and raised in England, she's an aspiring writer and film lover, with a strong affinity for cats.
You might also like
A Clockwork OrangeAlfred HitchcockCarol Reeddanny boyle