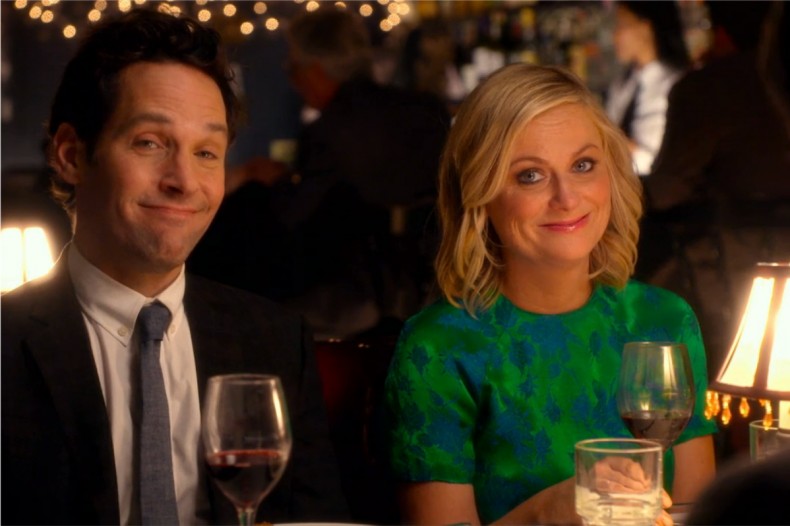 Taylor Sinople: The concept is a simple one: a rom-com spoof more romantic and comedic than the cookie-cutter lightweights it’s based on. In practice, though, David Wain’s “They Came Together” assembles a super team of comedy but gets little more out of the snide, would-be-clever screenplay than a few punchlines and a whole lot of flatlined bits.

Paul “handsome in a non-threatening way” Rudd plays up his everyman appeal as Joel – an executive at a powerful New York City candy corporation who falls in love with Molly (Amy Poehler), the owner of a small candy shop. They date, fall apart, and find their way back together again – almost as if they’re stuck in a romantic comedy movie.

Like the most off-beat SNL sketches, the ones that come after the third or fourth commercial break, “They Came Together” makes you feel “in on the joke” – connected with the actors to the ludicrousy of the bit. But then the sketch keeps going, and by the one-hour mark it’s clear that the glimpses of sincerity that make satirical comedy successful are never coming. No one wants an 83-minute long SNL sketch.

Josef Rodriguez: I feel like the film is able to overcome the setbacks of its inherent structural problems by establishing a legitimate chemistry between Rudd and Poehler that carries the film. At barely 80 minutes there’s no way anyone could say this film outstays its welcome, especially considering how funny it is. Some bits work better than others, but Wain’s humor is targeted at a very small demographic of people. I never got the impression that each scene was structured like a sketch, because it’s obvious that Wain has an affinity for the genre, and instead of assaulting it outright, he’s merely teasing it in a way that’s totally fresh. 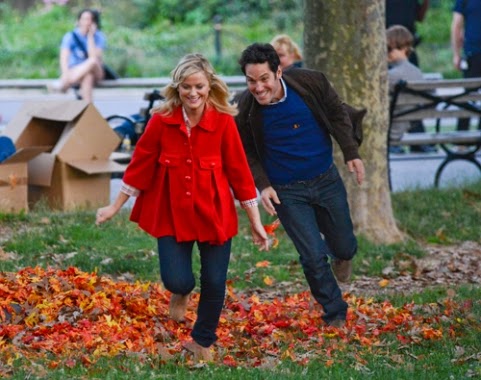 Taylor: I felt nothing for either of these characters. Rudd and Poehler (hot off a Golden Globe win for “Parks and Recreation”) are at the top of their game right now, yet their performances here feel restrained and impersonal, held back by the insincerity of the content. No one is really cutting loose on screen – they’re participating in the comedy but rarely truly engaging with it. I could observe their chemistry as two comedic actors having a fun time performing together, but I didn’t have any sense that their love was a real possibility. It’s good satire to show us characters without a shred of nuance in order to make a point about the thinness of rom-coms, but when that emptiness is reflected through the entire film (that is, we never feel the characters are authentic or interesting), you end up with a funny exercise, a very strong sketch comedy piece, but a bad movie.

It’s nearly impossible to make Bill Hader not funny, but Wain finds a way. The film commits hard to jokes and often takes them too far. Not into provocation (at least that would be something to talk about), but into monotony. Funny enough set-ups – like one involving a man at a Halloween party who rushes to the bathroom but can’t get his superhero costume off in time – are dragged through the mud with an entirely unfunny pay-off that just refuses to move on.

Josef: It’s interesting that you say Bill Hader wasn’t funny. The unique thing about this film, in my opinion, is that he was finally playing the straight man to the two absurd characters played by Paul Rudd and Amy Poehler. There’s a bit in the film where he congratulates Rudd’s character, Joel, for hooking up with his ex-girlfriend, and it seemed like it was included only to give fans of Hader the traditionally offbeat comedy they’re used to from him. He made me laugh quite a bit in this movie but for reasons that had been previously undiscovered. I didn’t know how much I liked straight-faced Hader until I saw this movie, and I think “They Came Together” revealed a new side to him that we haven’t necessarily seen before.

Taylor: I think that Hader plays the straight man in contrast only – I don’t think anyone involved in this film was smart enough to realize what they were doing with him. He does get some great reaction shots in when bizarre portions of Joel’s story jump cut to his confused face. But Wain and co-writer Michael Showalter write in this half-assed subplot involving Hader’s relationship and at that point he’s asked to perform material that just isn’t very funny. He felt phoned in to me, and I found his short and zany appearance in “Forgetting Sarah Marshall” to be far more down-to-earth and committed.

Josef: As far as the bathroom joke, the scene where he’s trying to take off the costume isn’t funny as a standalone, but the following sequence where he’s wearing the bathrobe and fabricating the story of what happened is one of the most hilarious bits in the entire movie. We’ve all seen the gross-out scene in every romantic comedy, but instead of trying to one-up those other films, Wain takes into account the one thing that most of those other films never do: the aftermath. 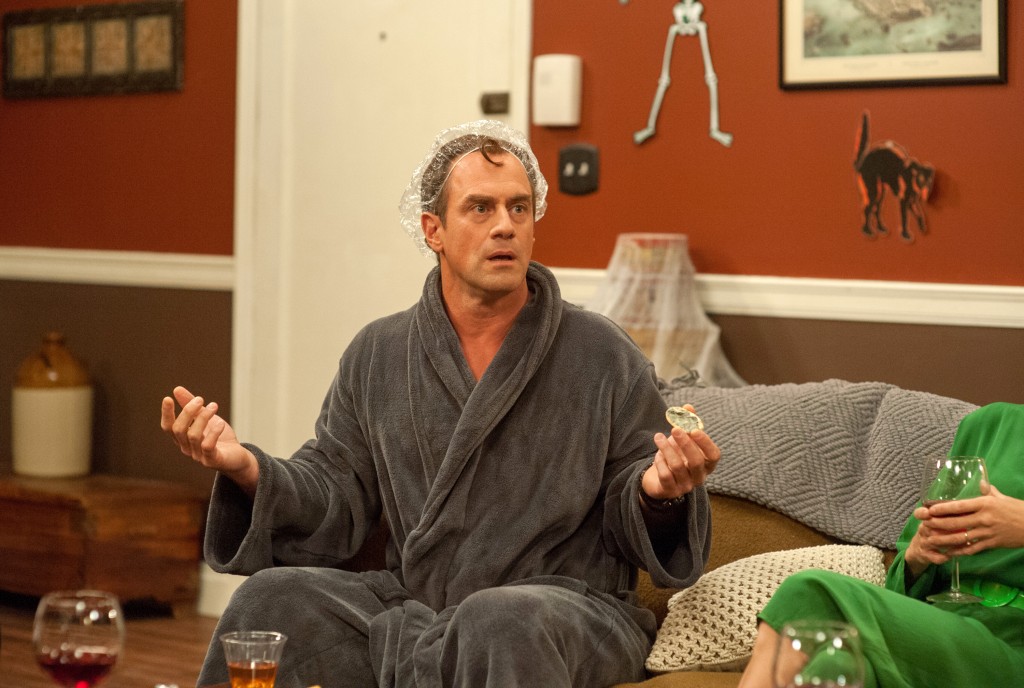 Taylor: See, we’re so far apart on this, because I found the explanation for that bathroom scene to be one of the most tedious scenes – an endless extrapolation on the single point that “someone else must have done it.” It felt, as I’ve said before, like those missed SNL opportunities where they just keep digging in deeper to an idea that isn’t working. To me, the humor that landed best is when Wain embraces the FORM of a romantic comedy, not just the content. There’s a moment when the camera zooms in tight on Paul Rudd’s face that’s pretty hilarious, or the indie-classic bit where characters mouth words at each other from across the room and we see the subtitles of what they’re saying — all of those visual language tricks really impressed me.

The inherent trouble with parodies is that, unless they’re really spectacularly done, there’s no room for honesty when every line of every scene is satirical. “They Came Together” pokes at the romantic comedy genre, picking apart the conventions and clichés, the assembly-line-molded scenes that appear time and time again, but never transcends it, never bests the worst of the genre to earn its sneering attitude.

Some observations about the pitfalls of romantic comedies can be genuinely clever, and there are a couple completely unexpected cameos and a hilarious sex montage, but for the most part “They Came Together” attacks a self-defeating genre – one that most of us have already made these same jokes about. It’s just easy prey. We all know that rom-coms open with aerial shots of the New York City skyline set to a cheery pop song. Many have joked about it for years. So when “They Came Together” does it and pauses for your laughter, it’s suggesting a quality of comedy that isn’t there.

Parody has worked so well for horror because the stories told in that genre are somewhat varied – it’s only the beats that are the same. You can lampoon the horror genre and take down its overused clichés while still making a brand new horror film. Wain is primarily interested in the tedious repetition of rom-coms and ends up nearly making one himself. As a spoof, “They Came Together” is effective, but it fails to affect on any other level, reducing its worth to that of a candy shop – promising sweets but over serving you to a stomach ache.

Taylor is a Chicago-based writer and aspiring film historian. He is the editor here at TFP, and has contributed to a number of international publications such as Cinema Scandinavia, PopMatters, and Room 101 Magazine. He can also be found listening to podcasts, researching topics he has little use for, or running after a city bus.
You might also like
amy poehlerBill HaderChristopher MeloniEllie Kemper

by Janneke Parrish on December 14, 2014
Mean Girls, unlike “fetch,” happened, and will continue to happen.

by Taylor Sinople on January 22, 2014
We know: you’re still catching up on all of 2013’s incredible awards season films. But how about when you’ve accomplished that? You’ll likely be hungry for more, only to find yourself caught in the eternal damnation of January and February film releases – each worse than the last. You’ll plead with your computer: “What happened to […]
Comments
Leave a reply
Add Comment Register

END_OF_DOCUMENT_TOKEN_TO_BE_REPLACED
Taylor Sinople Picks: The 16 Best Films of 2016
Form and Function in Alex Ross Perry’s “Queen of Earth&...
Digging for Fire and Unexpected: Husband and Wife Process Parenthoo...
Every Thing Will Be Fine 3D Review