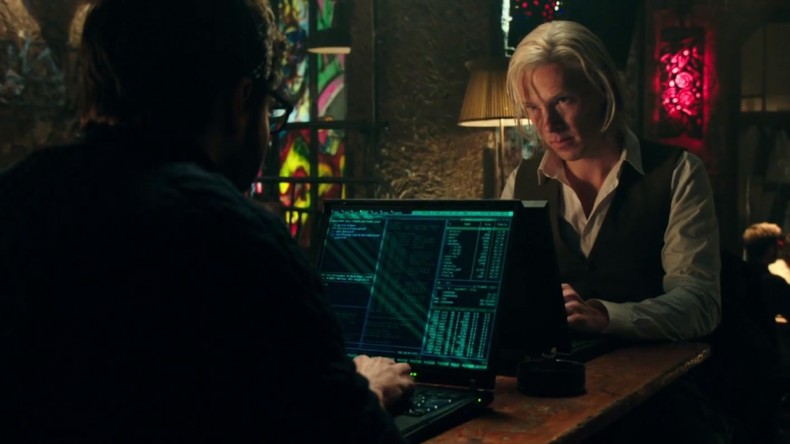 Oscar Wilde: “Give a man a mask and he will tell you the truth.” Is the mask of Hollywood-scale cinema enough to elucidate the WikiLeaks empire?

It was hard to miss the irony of having two men in suits confiscate the audiences’ cellphones prior to the advanced screening of WikiLeaks biopic “The Fifth Estate.” In the world of secret-exposing news sources, non-profit website WikiLeaks (responsible for the most substantial leak of government secrets since the Pentagon Papers) is rivaled in notoriety perhaps only by its founder – Julian Assange. While “The Fifth Estate” features one outstanding performance and a few excellent sequences, writer Josh Singer (“The West Wing”) struggles to maintain focus on both stories of a man and his organization. The win-some, lose-some result isn’t so surprising when considering this is a film directed by Bill Condon (responsible for both the Razzie-“winning” “The Twilight Saga: Breaking Dawn” and the Academy Award winning “Gods and Monsters”). “The Fifth Estate” serves a purpose larger than reminding you of how great “The Social Network” really was, but it swings and misses more often than not.

Condon’s film steps off on the right foot with a brilliant opening montage that captures in only two minutes the history of news distribution over the course of mankind from hieroglyphics, to news from the battlefront of World War II, to the Apple Newsstand app. Such a smart opening, it took over a year to create. From there, “The Fifth Estate” tells the story of WikiLeaks’ rise to prominence as a news source of unedited leaks and secret information collected by anonymous sources. Assange (Benedict Cumberbatch) develops the website alone before recruiting Daniel Domscheit-Berg (Daniel Brühl) early on and the two single-handedly expose the illegal financial corruption at Swiss bank Julius Baer in 2008. WikiLeaks goes on to become a trusted source for whistleblowers to leak government documents that reveal kill lists, assassination squads, US complicity in torture, and a history of unreported civilian casualties that Assange deems Collateral Murder.

WikiLeaks makes a deal with “The Guardian” (the publication that would later work with the most recent well-publicized whistleblower Edward Snowden) in order to publish hundreds of thousands of leaked documents contingent on the redaction of certain names that could put the lives of countless international informants at risk. When Assange publishes the lot without redactions or having even looked through what and whom the documents implicate, he is branded a traitor in some circles and a hero in others. 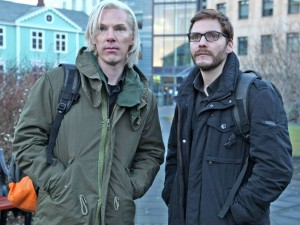 It has been a big year in cinema for exposure of government conspiracy and corruption. Most of these films were fictional narratives, but WikiLeaks is the real deal, a true and highly relevant story. “The Fifth Estate” should be – needs to be – the best film of the bunch, right? The trouble begins with the source – Condon bases his adaptation on novels by ex-WikiLeaks spokesman Daniel Domscheit-Berg and “The Guardian” journalists David Leigh and Luke Harding – a single-sided, personal bias that caught the attention and frustrations of Julian Assange himself.

Assange, in a lengthy rebuttal to the script, alleges the film is fiction and that most of the events depicted never happened. But, in “The Fifth Estate,” Assange is developed as a character to be just the type of man to refute any allegations that would harm his personal reputation. It’s fascinating – who do you believe? Does the fabrication of events have a place in films that have a “based on a true story” tagline? It certainly didn’t hurt “Argo.”

Like “Argo,” this is a global film that takes us around the world with Assange – London, Cairo, New York, Washington D.C., Kenya – as he stays just out of reach of authorities and witnesses the international impact of WikiLeaks (including the accidental outing of Bradley Manning as an anonymous source).

Flashy edits and rousing music selections are paired with creative visual tricks to create a highly stylized presentation. The visual effects team finds fun ways to put Daniel and Assange’s mostly online-chat based communication on screen for us to read. Most unexpected of all are abstract sequences that attempt to imagine the WikiLeaks empire as if it were a physical office space – rows of desks suspended in the vast web of Internet nothingness. These CGI-heavy scenes are useful in a few reveals about the company and Assange himself, but feel of an entirely different type of film than the genuinely serious one that surrounds it.

Benedict Cumberbatch (“Tinker Tailor Soldier Spy”, BBC’s “Sherlock”) is quickly becoming one of the most trusted actors in cinema and is transformative here as Julian Assange. The white hair, droning Australian accent, and paranoid, contradictive behavior is all deeply embedded into Cumberbatch’s performance. Despite being strongly cautioned against taking part in the film by Assange himself, Cumberbatch does a great honor to the ego behind the bravery and self-sacrifice that was necessary for WikiLeaks to exist.

Daniel Brühl succeeds in his second well-done biographical performance this month, but never reaches the levels of Cumberbatch due to a frustrating, completely irrelevant romantic subplot that takes him away from much of the great acting he’s capable of. This detour is given an irresponsible amount of screen-time while more crucial points such as Assange’s eventual arrest warrant due to accusations of sexual assault are ignored, mentioned only in a closing title. Entertainment is the basis of any film, but there is a certain responsibility behind being the first internationally released film to cinematically capture such an important story to do more than entertain.

Overall, will audiences walk away understanding WikiLeaks and Julian Assange? Sort of. “The Fifth Estate” counters every good decision with a bad one. Condon takes a dry script and turns it into something that’s not as dull as it sounds, but never hits that sweet spot of total captivation found in “The Social Network.” We’re invited to make up our minds about government transparency, leaks, and Assange himself, but then plunged into a rapid, action-stylized presentation closer to a Greengrass film. Cumberbatch may be Assange, but director Condon is no Fincher.

Note: See the film at your local theater starting on October 11th in the UK and October 18th in the US.

Taylor is a Chicago-based writer and aspiring film historian. He is the editor here at TFP, and has contributed to a number of international publications such as Cinema Scandinavia, PopMatters, and Room 101 Magazine. He can also be found listening to podcasts, researching topics he has little use for, or running after a city bus.
You might also like
Benedict CumberbatchConspiracyDaniel Brühl

by Taylor Sinople on December 15, 2013
“Violet, my wife, she takes pills,” Beverly Weston tells her, “sometimes a great many.” Johnna is interviewing for a job in Beverly’s (Sam Shepard) very large and very empty Oklahoman home. She is to be tasked with preparing food, cleaning, and driving Beverly’s wife to chemo treatments for her mouth cancer. Just as Beverly is […]
comments
Leave a reply
Add Comment Register