Features
3
0
previous article
Review: The Trip to Italy
next article
A Fresh Look At: The Tragedy of Man (Az Ember Tragédiája) (2011)

by Williamson Balliet on September 1, 2014 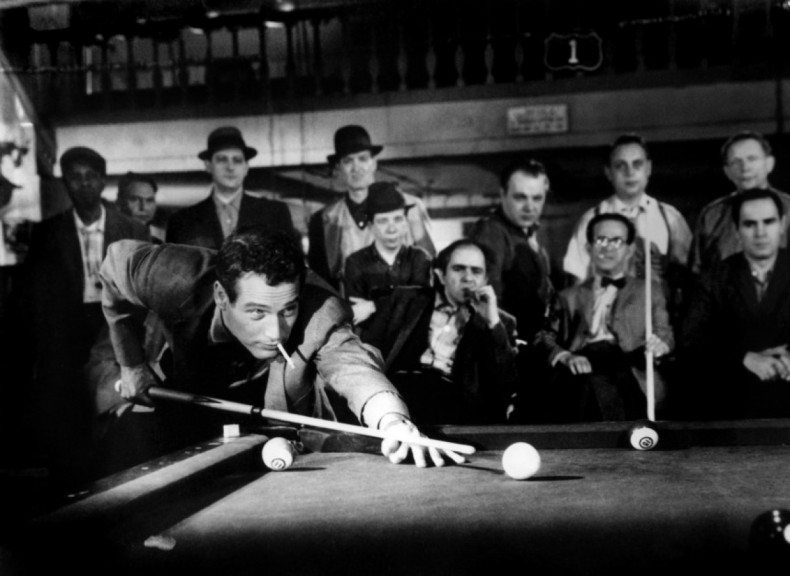 For twenty minutes of “The Hustler,” Fast Eddie Felson is who every man wants to be. He swaggers into Ames pool hall cocksure and loose. His sights are set on Minnesota Fats, the country’s most renowned pool player. He says that there is simply no other poolroom where he can walk out with $10,000 after a single night. But it is almost never greed that drives great cinematic gamblers, at least not for money. The loss of stakes is simply a representation of a larger psychological defeat by either men or fate. The amounts themselves allow audiences to “ooh” and “ah” over vast, alienating fortunes, but it is ego and hubris that drives these sorts of protagonists. Felson is tragic in the Aristotelian sense, undone through error of judgment. And like these classic heroes, the loss of his prosperity is simply the beginning.

Beginning his career in the theatre, director Robert Rossen knew how to set a scene. Every aspect of Ames is meticulously arranged; the hall feels more like a stage, populated by an ensemble of onlookers who bear witness to Eddie’s fall and resurgence. It is shot in deep focus, with action on nearly every table, action that comes to a swift end as Felson and Fats begin to square off on the felt. Art Director Alexander Trauner and set decorator Gene Callahan, who won Academy Awards for their efforts, created their own little world inside this room. It is interrupted by sunlight on only one occasion, much to the chagrin of the Eddie’s opponent. Minnesota Fats is only ever seen inside this tiny, bustling community. Outside of this room he would appear like any other man, but inside he is a legend. But Ames is a den of iniquity, where obsession is manufactured and dreams shattered. Men train their entire lives to face one another for unsung and unwritten glory, champions only to themselves and the precious few bystanders with lives unimagined outside this miniscule realm.

Felson loses himself first to the bottle, then to Fats. He abandons his long-time partner in the dead of night only to become involved with a woman as broken as he is. The two wallow in their mutual defeatism until Eddie succumbs to the siren song of Bert Gordon, a demon in a high-priced suit who promises vanity, wealth, and action in exchange for Felson’s spirit. This partnership, of course, ends in tragedy. He eventually returns to the story’s beginning, facing Fats at the same pool hall. It is not really redemption he is seeking, as the damage that has been caused by Bert is irreversible. He wishes to prove himself formidable, undercut the notion that his life is decided for him by powers outside of his control. It is a story as old as Gilgamesh, a hero spurred by tragedy attempting to oppose the unopposable. These sorts of epics resonate on a deeply human and almost intangible level. They attempt to qualify urges to fight against foregone conclusions for no other reason then to prove that our character is derived from the journey, not the destination.

But the romance of Eddie Felson differs from that of the compulsive gambler. The latter heroes fail not through momentary lapses in judgment but through their own inextricable depravity. For Axel Freed in Karel Reisz’s exceptional character study “The Gambler,” monetary loss is as inevitable as drawing his next breathe. He is an English professor not a statistician; there simply is no fun in betting safe. He dashes himself upon the rocks, answering any win with the opportunity for loss. An often-cited psychodynamic theory behind compulsive gamblers postulates that they hope to lose, circuitous punishment for unpunished deeds. This thought is given some credence by his bookie Hips, though quickly dismissed by Freed who seems all too familiar with the notion. Freed embodies two other distinct traits found in the study of compulsive gamblers. His life is lived during the roll of the roulette wheel or toss of the dice. The outcome is largely inconsequential to his happiness. Second, he is prone to delusions of omnipotence. While placing $45,000 worth of bets on college basketball games over the phone he states, “I can’t lose… Why? Because I’m betting on them.” It is a wonderful line, delivered in a moment of heated passion, and one that summarizes his essence with the unification of these two destructive mentalities.

The leads of Robert Altman’s “California Split” operate in a similar fashion, but the film instead focuses on the meaninglessness of victory as opposed to the inevitability of defeat. Upon selling everything they can to enter into a high-stakes poker game in Reno, Bill Denny and Charlie Waters have a streak of luck unmatched in their respective lives. Denny’s response is abject despair. These non-career gamblers thrive in uncertainty. To these men, money is fascinating because of its scarcity. It is a catalyst that, when delivered in overabundance, renders their ilk inert. As Charlie says, gazing over stacks of bills, “It doesn’t mean a fucking thing, does it?”

And yet there still exists a frightening excitement and vicarious thrill to observing these men of chance, addict or professional. They are at the whim of fate, their success decided by the shuffle of a deck or lay of the break. They have slipped the shackles of acquiescence, eschewing the banal traditional dream of domesticity and opting for manic-depressive swings and blanket uncertainty. They embody a romantic escapist ideal of non-conformity and selfishness. Their egotism is strong enough to poison whoever gets close enough to pierce the thin veneer of coolness to expose their larger, more characteristic calamity. But even the wakes of chaos that trails these men of action, Sarah Packard’s melodramatic end in “The Hustler” or the corruption of youth in “The Gambler,” are not enough to provide a counterbalance to their appeal. These men adhere to elusive philosophies and loose moral codes. And yet there remains something endlessly fascinating about the indomitable spirit that is unafraid of losing life, limb, or comfort to battle the odds.

END_OF_DOCUMENT_TOKEN_TO_BE_REPLACED
Taylor Sinople Picks: The 16 Best Films of 2016
Form and Function in Alex Ross Perry’s “Queen of Earth&...
Digging for Fire and Unexpected: Husband and Wife Process Parenthoo...
Every Thing Will Be Fine 3D Review