by Maximilien Luc Proctor on February 6, 2015 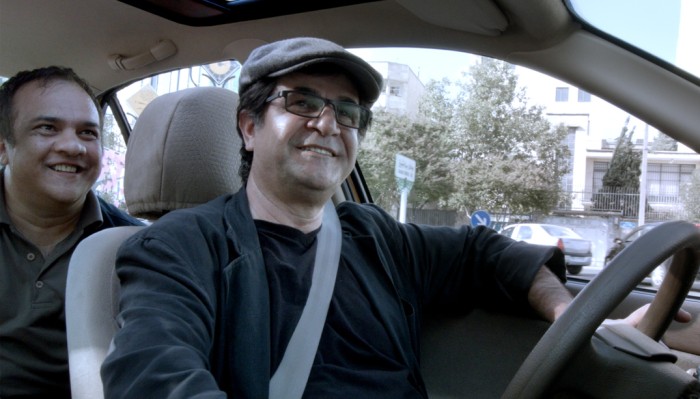 It is truly a blessing that we have directors like Jafar Panahi, and that he is still making movies despite being banned from making any films for 20 years back in 2010. This is now Panahi’s third film since that ban. It is all too rare that films today should make a strong political statement, let alone be a political statement by merely being brought into existence, but Taxi is just such a film.

Modestly defiant, it is a series of staged realities, leaving viewers questioning the supposed reality or artifice of every moment. Even moments which appear obviously staged leave a little room for doubt.

The entire movie is set within a taxi cab driven by Panahi himself. Virtually all of the dialogue is comprised of conversations which take place in said taxi. At first the conversation is between two riders, but soon this expands and the conversation takes place between Panahi and his passengers.

It is surprisingly good-humored and consistently entertaining, finding beauty in little things with its slice-of-life narrative as it explores themes of replication, digitization, and “sordid realism,” one of the big things which Panahi’s niece informs us will ensure that a film made in Iran is “un-distributable.” Panahi simultaneously paints a portrait of everyday life in Tehran and points out the political problems associated with freedom and filmmaking without directly pointing any figures but instead merely suggesting the absurdity of certain regulations by merely mentioning them. Even his young niece can’t seem to make sense of such self-contradictory rules.

Taxi is a brave and thought-provoking act of filmmaking that worked hard to offer the opportunity to reach curious eyes and minds and it certainly deserves to be seen.

Maximilien Luc Proctor graduated with a Bachelor’s degree in Film and Media Studies at the University of Oklahoma. In his spare time he plays guitar and sings in a band, as well as watching and making films however and whenever possible – as a one-man-production-team making avant-garde shorts or as a director of a small-scale independent feature productions. He likes what he sees in cinema and wants to celebrate the good stuff whenever possible.
You might also like
Berlinale 2015Jafar PanahiTaxi

END_OF_DOCUMENT_TOKEN_TO_BE_REPLACED
Taylor Sinople Picks: The 16 Best Films of 2016
Form and Function in Alex Ross Perry’s “Queen of Earth&...
Digging for Fire and Unexpected: Husband and Wife Process Parenthoo...
Every Thing Will Be Fine 3D Review