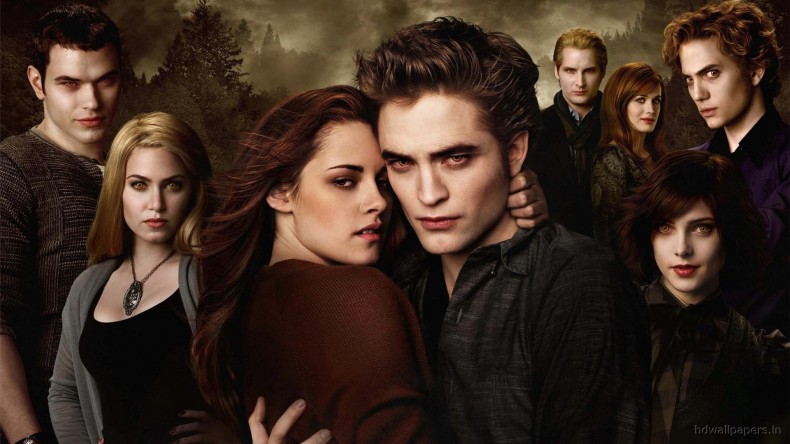 In 2008, Catherine Hardwicke directed a vampire-love-story based on a young-adult novel by Stephenie Meyer. The story follows Bella Swan, a young girl who falls in love with a vampire. The film was shot in 48 days and had a 37 million dollar budget[1].

Neither the filmmakers nor the author could have expected the enormous success of the billion dollar franchise that is “The Twilight Saga.” Not only did the film launch the careers of actors Kristen Stewart, Robert Pattinson and Taylor Lautner, “Twilight” also had the biggest opening weekend gross ever for a film directed by a woman, and also for a film starring a woman. We do not like to admit it, but “Twilight” has changed the vampire-genre in cinema forever.

The film franchise consists out of five films, which are based on the saga by young-adult-author Stephenie Meyer. “Twilight”, the first entry in the series, received reasonable reviews, but was an explosive box-office hit. The film’s 37 dollar budget was multiplied ten times, which resulted in a worldwide gross of over 392 million dollar[2]. In the following four years, the production company of “Twilight”, Summit Entertainment, released four sequels. But neither of those films ever reached the same level as “Twilight”, critic-wise. “Constrained by the plot of the novel, the film (“The Twilight Saga: New Moon”) keeps the two lovers apart for quite a spell, robbing the project of the crazy-in-love energy that made “Twilight” such a guilty pleasure,” writes Kenneth Turan in Los Angeles Times. According to Noah Berlatsky from Chigago Reader: “This (“The Twilight Saga: Eclipse”) is definitely the worst installment of the franchise to date”. Its follow-up, “The Twilight Saga: Breaking Dawn Part I”, is also called “the worst “Twilight” movie to date” by Peter Travers from Rolling Stone. Conclusion: the “Twilight”-franchise went down-hill after “Twilight.”

The critics chewed on the installments fiercely and spit them out. The fans, however, did not. Even tough the films received such mixed reviews, the young-adult audience stayed loyal to their beloved franchise and this leaded to box-office hit after box-office hit. Despite the huge success of the “Twilight”-franchise, the amount of vampire-films did not increase that massively post-“Twilight”. Only in 2009, the year following the release of “Twilight”, a boom of vampire-films took place, with the release of 11 films featuring vampires[3]. The amount gradually decreased in the years after 2009. More than 39 films were released in the vampire-genre in those six years since 2008, while in the six years before “Twilight”, 33 films featuring vampires played at the movies[4]. Surprisingly, “Twilight” did not lead to a lot more vampire-films. It just seems like it, because vampires have become mainstream since “Twilight.” 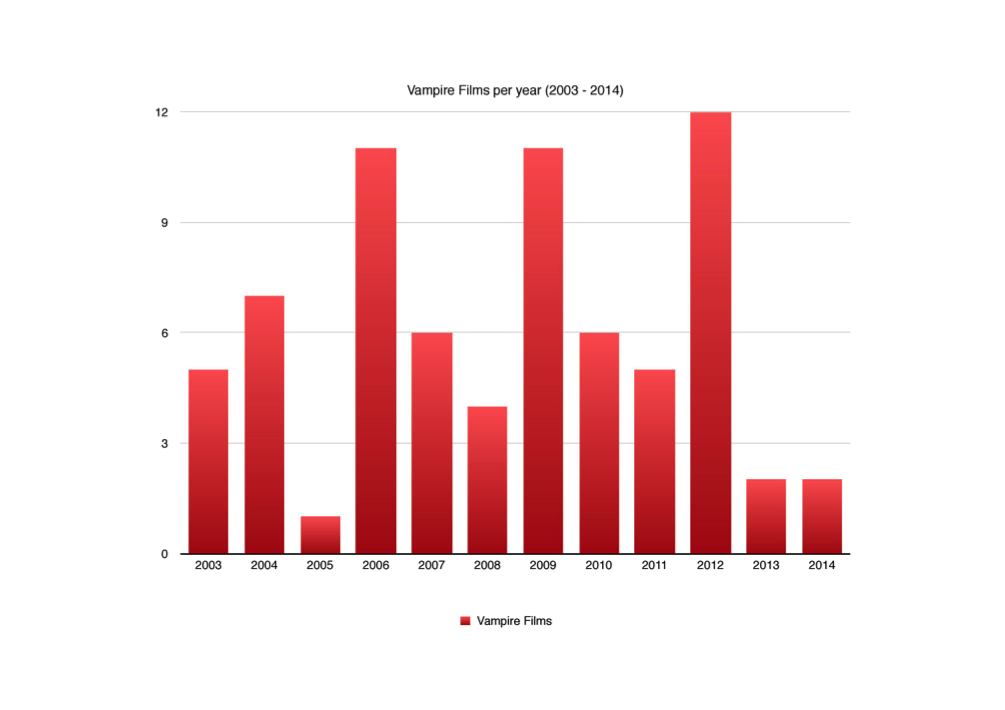 Before “Twilight,” vampires were less popular. Those 33 films pre-“Twilight” that feature vampires, are mostly foreign or cult films, except for block-buster franchise “Underworld”, starring Kate Beckinsale, Michael Sheen and Bill Nighy. Vampires were not mainstream, but since 2008, they are. It started with the “Twilight”-franchise, which converted billions of young-adults across the globe to the vampire-romance. But there are two sides to this world-wide phenomenon. In 2010, “the guys who couldn’t sit through another vampire film”, released a scorning parody on both “Twilight” and “New Moon”, called “Vampires Suck,” while in 2012, another parody on the entire saga appeared, “Breaking Wind”. Before there was “Twilight”, there were no parodies on vampire-films, simply because there has never been a film about vampires that has been as popular and mainstream as the “Twilight”-franchise.

Vampires did not only became mainstream, they also became less frightening. Before “Twilight”, vampires were to be feared. They were portrayed as killers and the monsters that needed to be killed. In 1931, the world was introduced to the iconic character of Count Dracula, in “Dracula”. The Count, who is probably the most known vampire next to “Twilight”’s Edward Cullen, is a bloodthirsty creature, who creeps through the shadows of his mansion at night to drink from the veins of attractive female visitors. Even Bella, the main character of “Twilight”, expects vampires to be the way they are portrayed in “Dracula”. When Edward asks her: “What did you expect? Coffins and dungeons and moats?” Bella replies: “No, not the moats.”

The moats have gone long lost and they have been replaced by the vampire being a species that strongly resembles mankind. Vampires live in ordinary, moat-less houses, have humane emotions and are victims of their own blood-thirst. The popular post-“Twilight” tv-series “The Vampire Diaries,” is an excellent example of this. Vampires Stefan and Damon Salvatore, who will be young adults for eternity, will be pining for their human life for eternity. They live in a small town, they go to high school, they fall in love – the only thing that really makes them vampires, is that they drink blood and have supernatural strength and speed. Suddenly, being a vampire doesn’t sound that bad.

“There are three things you find in every vampire-story. Sex. Blood. And death.” In “The Moth Diaries,” a post-“Twilight” adaptation, an English-teacher explains the basic principles of the vampire-genre. These principles can indeed be found in every story that features vampires since Bram Stoker wrote his classic horror-novel Dracula in 1897. Vampires had always belonged to the horror and the action genre, but since 2008, they do not anymore. From 2003 till 2008, 33 vampire-films were released world-wide, and 42,4% of those films, did belong in the action genre. But in the six years after “Twilight”’s release, that percentage shockingly decreased to 12,8%. Between 2008 and 2014, the percentage of vampire films in the drama genre, shockingly increased from 6,1% to 30,8%. 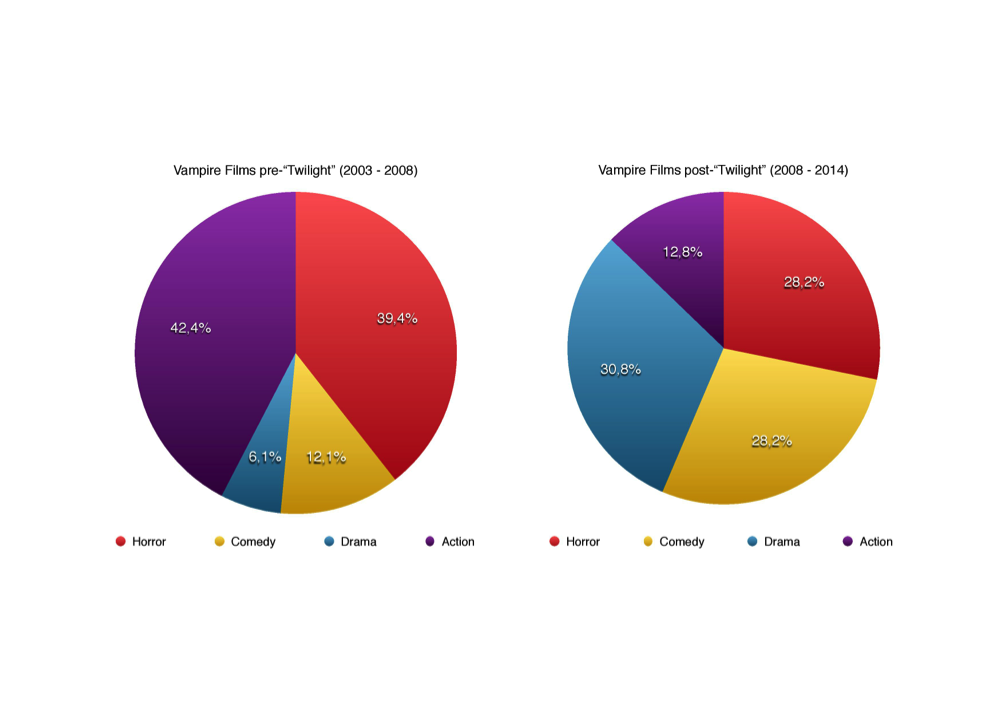 Vampires are no longer horrific, but that is not necessarily a bad thing. There are a few examples of post-“Twilight” vampire films, that do indeed belong to the drama-genre, but do the classic vampires justice. For example, Neil Jordan, known for his 1994-classic “Interview With The Vampire”, merges the drama of today’s vampires, the horror of past’s vampires and the sexiness of all-time’s vampires in “Byzantium.” The film stars Saoirse Ronan, Gemma Arterton and Sam Riley and was released in 2012. A year later, acclaimed director Jim Jarmusch brought “Only Lovers Left Alive” to the silver screen, a film about the eternal love between Eve and Adam, brilliantly portrayed by Tilda Swinton and Tom Hiddleston.

Although we do not like to admit it, “Twilight” indefinitely altered the course of the iconic vampire genre. Since 2008, the vampires have become less scary and more mainstream. Because of this peak in popularity, it seems like there are vampire-films being released everywhere, but “Twilight” only caused a boom of vampire-films in 2009. But the most drastic change “Twilight” has caused, is genre-wise. Vampires no longer belong in the horror and action genre, but in the comedy and drama section of the video store.

Eden is a student, living in the Netherlands, dreaming of a journalist career. She writes, reads and spends a lot of her time at the local cinema - all in preparation for the previous stated career, of course. Apart from British drama series, writing novels and strawberry shortcakes, Eden loves everything about films: watching films, writing about films, discussing films at the dinner table… everything.
You might also like
Only Lovers Left AliveStephenie MeyerVampires

by Taylor Sinople on April 24, 2014
Jim Jarmusch and vampires prove to be a perfect cinematic match in "Only Lovers Left Alive:" a profound and stylish story of immortality and infinite romance.
comments
Leave a reply
Add Comment Register

END_OF_DOCUMENT_TOKEN_TO_BE_REPLACED
Taylor Sinople Picks: The 16 Best Films of 2016
Form and Function in Alex Ross Perry’s “Queen of Earth&...
Digging for Fire and Unexpected: Husband and Wife Process Parenthoo...
Every Thing Will Be Fine 3D Review