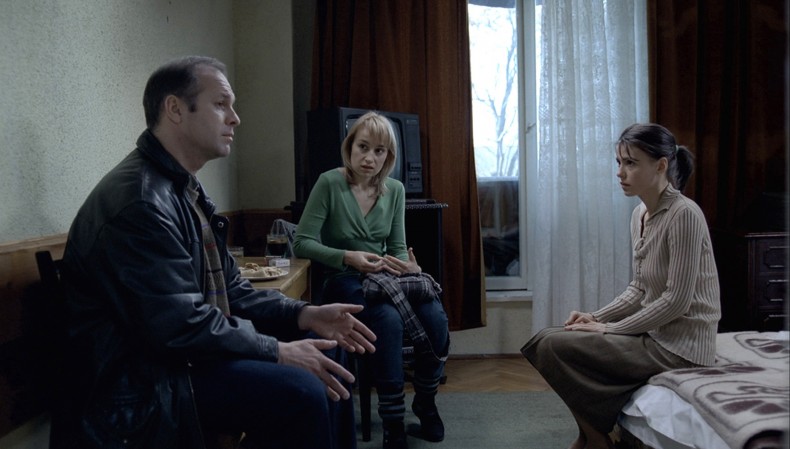 Editor’s Note: “Seven Year Itch” is a series of retrospective essays that look at films released seven years ago to the month. How does a Hollywood blockbuster from seven years ago work today? Which films have picked up an underground following since? Of special consideration is how the films have held up culturally, technologically, and critically.

We see two fish, occupying a tank barely a quarter filled with water. Smoke enters the screen from the left as a clock hurriedly ticks in the background. With these simple ten seconds from its opening shot, “4 Months, 3 Weeks and 2 Days” encapsulates the peril of its protagonists and signifies the haze of bleakness and depravity that is apparent, but only for those that care to look. Set in Romania in 1987, the film centers on Otilla Mihartescu as she helps her college roommate, Gabita Dragut, conduct the high crime of abortion. As they become victims to the immoral perpetrator willing to engage in such an unscrupulous occupation, obviously shaded by its illegality, their suffering serves as a microcosm for the ennui of the voiceless in this Communist state.

Directed by Cristian Mungiu, “4 Months, 3 Weeks and 2 Days” received the Palme d’Or in 2007, competing with the works by auteurs like Tarantino, Wong Kar-wai, Joel and Ethan Coen, and David Fincher. The film possesses a melancholy and depravity, accentuated by a minimalistic editing approach that forces you to stare, rather than glance into the abyss. Mungiu displays a shocking courage in this approach, knowing the visceral effect this will have on an audience desperate for a moment of respite from the relentless hypocrisy, cruelty, and fear exhibited by the subjects. He has complete control and it is apparent from the very first scenes. The camera follows Otilla as she meets with her neighbors in the decrepit university dormitory. One sells cigarettes and tic-tacs while others peddle makeup from their cramped, depressingly neutral rooms. This underground market is open and accepted. It’s a natural part of life for these youths who know where to find contraband and illegal services throughout the city. It emphasizes the inevitable duplicity arising from repressive regimes. The camera is handheld, but steady as it follows Otilla, echoing her nervous, fearful diligence and determination in aiding her friend commit a crime against the state.

After securing a room for the act, the film begins its rapid descent into the harrowing, the horrifying, and the grotesque. Otilla meets with Mr. Bebe (Vlad Ivanov), hired to perform the abortion. Meeting him in his car, their conversation is sparse and severe. Throughout, dogs are loudly barking offscreen, portentous warnings or symbolic of this inescapable urban plight. Mr. Bebe is matter-of-fact, and sickeningly so.  He walks the anxious girls through the process of the abortion in graphic detail. The film does not flinch, maintaining focus on all three co-conspirators throughout his description. We see the reactions of these women as he tells them there will be no anesthetic, the length of time this will take, and the manner in which this is done. The shot itself lasts over five minutes but it feels longer.

I would liken watching “4 Months, 3 Weeks and 2 Day” to searching for fossil fuels. Just when you think the depths have been exhausted, advances allow further darknesses to be exposed and cultivated for their rich black. Mr. Bebe’s villainy would seem hyperbolic were the camera not so expository and uncompromising. It is also of course a testament to Ivanov’s performance; a lesser actor could risk audience detachment through such hyperbolic displays of ruthlessness. He is demon, both methodical and barbaric, but the gatekeeper to the possibility of normalcy, or at least whatever there was to find under Nicolae Ceauşescu. And yet despite how memorable and jarring the scenes in this hotel room are, the film plays on a larger social criticism. When Otilla attends the birthday party of her boyfriend’s mother, the slightly jovial atmosphere is so stark in its contrast to the scenes just prior.  It is here where the central conceit is most emphatic, placing the fringes directly adjacent to civility, statically shooting Otilla in a long take, who is anxiously and almost wordlessly lost amongst the company of happy strangers.

Of course, Otilla must return to the hotel to confront the consequences of her and Gabita and the film’s habit of brutal honesty inevitably crescendos. It is wholly uncomfortable but unwaveringly truthful. The climax is calculated, forceful, and necessary, despite what the mind tells you seconds before. Mungiu a heightened sense of sympathy to Otilla’s perspective; one dominated by fear, paranoia, and repressed victimhood.

Otilla finds out a fight had occurred amidst a wedding party on the hotel’s main floor. This is one of the director’s final messages of brutality overtaking apparent propriety. Like the opening of Lynch’s Blue Velvet more symbolically displays, lurking just underneath normality is a darkness that becomes unavoidable once first witnessed. And when Otilla joins Gabita at the hotel’s restaurant, the film startlingly breaks from its immersive realism to note the intimacy between character and the viewer. We have seen the underbelly of a society structured upon repression and its subsequent effects on its inhabitants and the lengths one will go through to maintain their individualism. And now that we have, we can’t go back.

END_OF_DOCUMENT_TOKEN_TO_BE_REPLACED
Taylor Sinople Picks: The 16 Best Films of 2016
Form and Function in Alex Ross Perry’s “Queen of Earth&...
Digging for Fire and Unexpected: Husband and Wife Process Parenthoo...
Every Thing Will Be Fine 3D Review