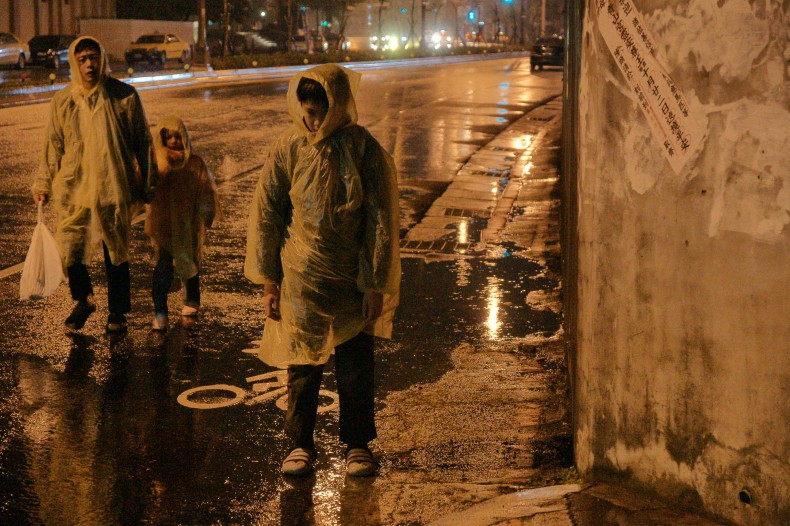 Celebrated Second New Wave Taiwanese auteur Tsai Ming-liang brings what may be his final film to international festivals this year, and what a final film it is.

“Stray Dogs” will be talked about with wide eyes. It takes a few hours of thought and a thesaurus for reference to even begin discussing this exhausting, beautiful, agonizing experience that challenges existing boundaries as often as it creates new ones.

A father (played by Tsai-regular Lee Kang-sheng) makes a sparse living as a human billboard while struggling to support his 12-year-old son and 6-year-old daughter who roam a supermarket by day and squat together in an abandoned building by night. 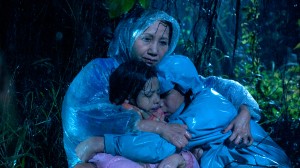 As is typical to Tsai’s work (which includes the Golden Bear winning “Vive L’Amour”), “Stray Dogs” is an effort of staggering artistic expression derived not from the narrative itself but the process of capturing that narrative. The lives of this transient family are explored in two distinct acts that contain drawn out, single shot vignettes that stay on the screen anywhere from a few minutes to over ten. Rarely communicated through dialogue, the story is instead conveyed visually in moments of inactivity. The characters aren’t often doing much on-screen, but those times of idleness end up defining them.

The first act jumps around a few typical days with the father and children. We witness the father standing on the street corner with his sign for long stretches of time. We see the children at the supermarket. We watch the man eat an entire meal in close-up, five minutes of a rushed craze to consume food not for pleasure but survival. We return to the man working on the street, holding his advertising sign. Each time the camera moves in a little further until we are in unforgiving close-up and able to now see his shivering from cold, his soft singing of an ancient Chinese parable, the snot running down his nose.

These sequences seem to abuse the audience’s attention. There’s something to that. If the audience is becoming uncomfortable and bored with how long they’re being asked to watch a static composition, what does that tell us about how the character must feel? It’s somewhat sacrificial of the viewer’s enjoyment, but is a necessary burden in order to achieve eventual moments of understanding. Each shot is left on screen longer than you expect it to, allowing time for eyes to wander the frame, learning more about the foreign culture and characters through context. Small movements catch the eye, and the scrutiny of a resting face begins to tell you more than an actively emoting one. This sort of filmmaking stretches and perverts neorealism – prompting a certain number of walkouts at every screening. Tsai is in absolutely no hurry to advance the plot, in fact this is anti-plot – the absence of a traditional narrative in the father’s life is what makes it so distressingly sorrowful to watch.

This large first act culminates in an unforgettable, devastating scene that involves the father’s alcohol-fueled destruction of a symbolic keepsake, created by the children, in an expression of deep-seated anger, loneliness, and sadness. 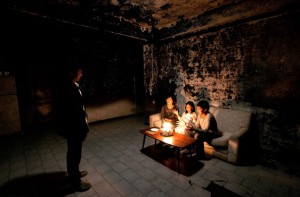 The second half of the 138-minute film is less explicitly literal. We watch the father and children living with their mother in a decaying home built from black cement walls dripping with white streaks – the “tears” of the house – a set serving some purpose closer to expressionism than realism. It’s unclear whether this setting is a prequel to the events of the first act, or some other kind of dream-like scenario in which the children have a mother. So different are these two acts that the film feels headed towards some kind of unanticipated, tone-shifting conclusion that will break the hypnotic plodding of the minimalist plot. A finale comes in the form of a twenty-minute sequence that holds on screen a single image for what will be for most viewers an unprecedented amount of time. As this long take becomes something more, something unending, you’re left to confront your thoughts about what you’ve seen. There is no escape for the passive viewer.

“Stray Dogs” is recommendable to almost no one. It’s perhaps the slowest-moving film I’ve ever seen. But, those with the patience and hardcore interest in pure cinema will find Tsai’s masterpiece to be one of the most challenging, painful, and ultimately rewarding experiences in observational filmmaking. My initial response after the viewing was not unlike my recent reaction to “Gravity.” A truly immersive film calls for re-centering of one’s existence. “Stray Dogs” brings you into its isolated world and spits you back out into yours – asking you to process art that goes well beyond the typical territory of entertainment.

by Taylor Sinople on October 23, 2013
Romanian black comedy “Domestic” follows the daily squabbles of three families living in the same apartment block. While the casual observer may think the frequent arguing coming from their rooms is all about the people that live there, closer examination reveals that it is in fact the animals in their lives, both pets and livestock, […]